With Amiwest 2011 coming around the corner I thought I would do a little more to share about my favorite computer, the Amiga. Born 1985, the Amiga 1000 was an amazing achievement for a small band of software and hardware hackers. It featured color screens and 16 bit sound back when MAC's where grey scale and PC's green screens. In addition to having great looks the Amiga also had a classy personality with full multitasking and DMA between a custom chipset. DMA means Direct Memory Access and that one of the BIG secrets of how it worked. The idea was the CPU tells the Sound processor (Paula) to play a sound, then Paula reads the memory to play it. Super cool stuff I'll kick this off with my current home Amiga's desktop: 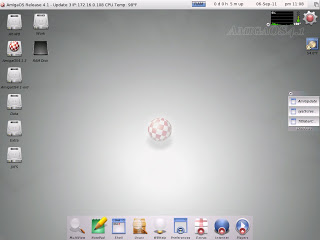