As if I didn’t have enough games to play and get addicted to, Gradius V arrived in the mail a few days ago. I admit to paying quite a bit to get hold of this fantastic game, but I think it was totally worth it. Already had a few tries to freshen up my memory and it was just as fun as it was in the past.

AmiWest  planners  have  debated  and discussed the theme for our show this
year.   It  should be something that we haven't done or emphasized much, if
that's  possible  in the 16th year of the show.  And it should be something
with wider appeal to encourage attendance.

So  our  theme this year is AMIGA COMMUNITY 2013 - the AmiVerse.  Now what,
you may be asking, is so novel about that?!?  Isn't that what we always do?

Hey my fellow Amigans... most of you won't even bother reading this article as it contains info about Greek support on OS3.9 only.
For the Greek readers though... it can be informative though so here goes :)

First of all, OS3.9, comes by default with many Localization language packs (including Greek) from the official Haage-Partner's website which you can check out here:
http://www.haage-partner.net/download/AmigaOS/BB3.9-2-Locales/

In the last month I was trying to hang on my sanity while we were on house-hunting in Auckland (nuff' said). Wasn't easy and apparently it is not even close to be finished. :/

Anyway, I managed to do some work on the E-UAE JIT in the stolen moments.

In the update for this month you will find these little eggs:

Big thanks to Mike Blackburn for some fixes for the Macintosh support and for implementing the Linux PPC support! Well done, Mike.

After this (and this) update Mac OSX 10.4 is supported too: the instruction cache flush needed a different implementation.

Also Linux PPC users can benefit from the PowerPC JIT.

The more the merrier.

I’m a happy camper today! Why? Well, R-Type Final for the PlayStation 2 arrived in the mail today. Can’t wait to start playing it, so I guess this will be one of my shorter posts. Since a really long time (long before HxC Rev.F and Slim Edition), I wanted to take my Rev.C HxC SD Floppy emulator and slim it down as much as possible in order to make it moddable for my taste :)
The one thing I didn't like much was the big (lol) LCD screen that occupied a lot of space.

While searching the bay, I managed to get a really Tiny 16x2 LCD Screen that was really nice for my needs but instead of having pins, it had a ribbon as it's meant for embedded projects.

Friday after work, and yester day I did some experimentation, people keep on saying how great AGA and OCS are for demos, is this really true? Does planar really have a advantage over 8bit CLUT chunky graphics. I think it does not, its just that planar modes, makes easier to do layering, and graphic card does the rest, so my experiment was simple implement some sort of layering in 8bit CLUT, should not be too hard.

So here is my main code, not so complicated.

As I said in previous articles, my ACA630 was unable to operate stable @ 40MHz alas I putted an oscillator of 72MHz to have a speed of 36MHz. I always wanted to try an 75MHz so I bought one from a fellow Amigan (altcomputing) which arrived yesterday :)

After replacing my former 72MHz oscillator and putting the new 75MHz one... Amiga booted just fine so I tried first some benchmarks via latest version of SysInfo...

Today I wanted to take a look at the recently released X1K Temp Docky for the X1000.

The release of Excalibur is eminent

There are only a few features, that I can think of that want, but they going to break some thing maybe, it's time think about uploading a new version, there is 30 changes in this update, so this big update compared to few of the older updates, I lost a lot changes, and head to do most of this twice, nothing makes me more annoyed, well its done. 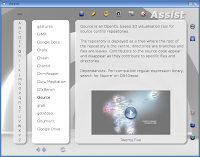 Welcome to gtmooya's blog! Here you will find information and news about the AmigaOS 4 program 'Assist'. From time to time I may also post news about other Amiga-related projects and musings here.

I decided to do a quick alpha release of my p-uae port, grab it from the aros-archives / aminet, as soon as is accepted there.

This alpha release of P-UAE for AROS is based on the sources at http://github.com/GnoStiC/PUAE from the 31st January 2013.

This is a *real* alpha version, don't expect anything: It *will* crash, it *will* miss features and so on.