I'm writing this blog to the sound of the annual Christmas pop song medley playing on the radio and with shops and cafes adorned with images of robins, Santa Claus, reindeer and snow. Even in New Zealand, where it's approaching mid summer and the pohutukawa trees are in full bloom! So while the Northern hemisphere freezes, down-under we are looking forward to our traditional Christmas barbie on the beach.

Having said that, after a few days of sunshine it's now raining again and Wellington is living up to its title as the original "Windy" city. 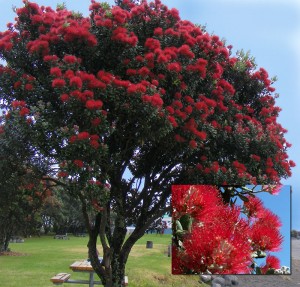 But, the really good news is the world did not end on December the 21st as "foretold" by the Mayan prophecies. I noticed one 2012 "doomsday" website which had been predicting the end of times has now (unsurprisingly) changed it's message. It claims we are now entering a new beginning. A period of renewed enlightenment, peace and harmony with hope, change, love and understanding. Actually that not a bad idea, whatever our preferred Amiga flavour - Strictly Classic, Red or Blue, Emulation or Next-Generation, lets make 2013 the year in which we all work together for the greater Amiga good. By the look of it, I think it's already shaping up to be an excellent year. 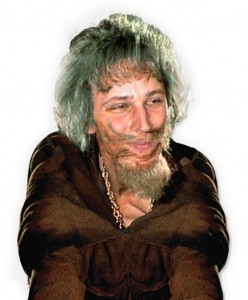 When Amiga hardware wizard, Jens Schönfeld (Individual Computers) introduced his Catweasel universal floppy disk controller in the Summer 1995 little did he know that it would become one of his most successful products. His original plan was to design a hardware-only HD-floppy disk controller to allow the Amiga to use a standard PC floppy drive. Unfortunately, this proved unsuccessful and he continued to work on the problem for a several months. Finally after an all night session on a PC based CAD system he came up with the prototype ISA model.

For company he had the TV running in the background and early in the morning he noticed an episode of Catweazle, a UK children's TV programme, about an old, eccentric, dishevelled and smelly (but lovable) 11th century wizard who accidentally travels through time to the year 1969.

Jens thought that Catweazle was a cool name for his new board but changed the spelling to Catweasel to avoid potential issues with the naming rights. Later, he designed Kylwalda as a companion device to Catweasel which was a simple adapter that lets you use one floppy drive with two floppy controllers which he named after Catweazle's pet toad. 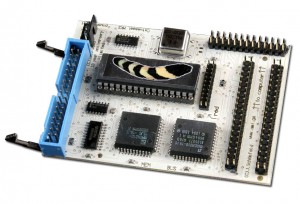 If you check Jen's posts in popular Amiga forums he often uses words like "electrickery" and "wiesel", terms which hark back to the original Catweazle TV series. Jen's first Catweasel design supported the A1200, big-box Amigas equipped with Zorro slots and PC's with ISA slots. He went on to create several Catweasel versions and device drivers were written for AmigaOS 4 by Kjetil Hvalstrand (NutsAboutAmiga) for the Mk IV model based on the original cwfloppy Linux driver created by Michael Krause. Amiga Developer Ian Gledhill later created additional device drivers under GPL for AmigaOS 4, MorphOS and AROS.  With the inclusion of RunInUAE in the latest AmigaOS 4.1 updates we decided it would be a good idea if the A1-X1000 could also read standard Amiga floppy disks. The Mk IV model, which works well in the AmigaONE X1000, is now out of stock and there are no plans for any future productions runs.

However, the good news is there are stocks of the Catweasel Mk2 model and additional units can be manufactured. With the hardware side sorted we still needed device driver software and who better than Ian Gledhill the developer of the most recent drivers for all Next-Generation Amiga flavours. Although this is predominantly for the A1-X1000, owners of other Next-Generation machines will also benefit. The Catweasel drivers are now complete and AmigaKit will be stocking the new Catweasel Mk 2 bundle with the device driver and interface cable in the New Year. Details will be provided on the AmigaKit website when the Catweasel kits are available.

A slice of Raspberry Pi?

I've been following all the hype and excitement surrounding the Raspberry Pi single board computer. OK I know that the Raspberry Pi is not meant to be a computer powerhouse but more a fun "toy" to teach today's youngsters the joys of basic computer science in schools. If little Jane or Johnny spills their coke or treads on the board the low hardware costs means it's not a financial disaster for the school or the parents. One commentator described the Raspberry Pi as the Sinclair Spectrum for the modern age. Personally I'd rather think of it as the C64 but then again I always had a Commodore bias!

Having seen a Pi system in action running Linux, the experience is not exactly life in the fast lane. However, there are lots of unusual and exciting projects being attempted with this low cost hardware. 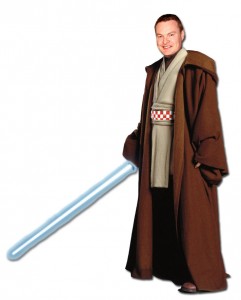 Therefore I was very interested to learn that Pat Wall, our very own Linux Distro Jedhi Master, had emulated a Raspberry Pi systems on his AmigaONE X1000 using QEMU. QEMU which, according the Wikipedia, is short for "Quick EMUlator", is free and open-source software that performs hardware visualisation. It emulates CPUs through dynamic binary translation and provides a set of device models, enabling it to run a variety of unmodified guest operating systems. Simply put QEMU allows you to emulate any CPU and operating system, on almost any hardware. It also provides an accelerated mode for supporting a mixture of binary translation and native execution similar to VirtualBox and VMWare Workstation.  It can also be used for CPU emulation for user level processes, allowing applications compiled for one architecture to be run on another.

Pat has filled his emulated Pi with Raspbian, a GNU/Linux system based on Debian and optimized for the Raspberry Pi hardware. According to the developers Raspbian, which was completed in June 2012, is supplied with over 35,000 packages and pre-compiled software optimized for best performance on the Raspberry Pi. The developers have somehow managed to get the LXDE desktop running in a mere 39MB RAM, which is really quite amazing. According to Pat the emulation is not that speedy, compared to running GNU/Linux natively on the A1-X1000, but never-the-less it works perfectly. 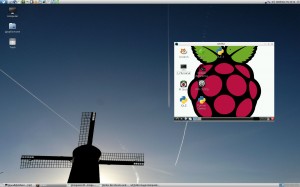 OK using the A1-X1000 to emulate an OS created for the Raspberry Pi is total overkill I know, but I learned two new things. First. The A1-X1000 can readily emulate other CPU architectures and OSs using QEMU; and secondly we now have another Linux distribution that can be installed on the A1-X1000, albeit through QEMU emulation. Thanks Pat, I think? Now about the GNU/Linux Installation guide rewrite.............

The Raspberry Pi might not have it all it's own way in the low cost, single board computer stakes. There are a couple of PowerPC options which have recently been announced that, while not as cheap as the Raspberry Pi, are both under US$200! Freescale have released the TWR-P1025 module as part of its Freescale Tower System portfolio, a modular development platform which it claims enables rapid prototyping and tool re-use through reconfigurable hardware. Interestingly, the TWR-P1025 processor module, which includes a QorIQ P1025 dual-core PowerPC processor can also be operated as a stand-alone single board computer development platform. More details can be found on Freescale's website.

Servergy announced a Linux-on-Power development platform called P-Cubed at the recent Ubuntu Developer Summit in Copenhagen, Denmark. According to its developers, "the computer is an all-in development board catering primarily to enterprise Linux programmers, but is can also be used by educators and serious hobbyists as well."

"It features Power Architecture in an SoC (system on chip) that encompasses high-end hardware, including multi-core with hardware virtualization, which help the board to deliver a level of quality that is not available for other similar solutions."

Apart from Ubuntu the new board will support Debian, Fedora, and openSUSE. Again the CPU is PowerPC dual-core and although the final price of P-Cubed has not yet been revealed it is expected to retail for less that US$200. For more information please check out Servergy's website.

With over a dozens companies now developing hardware who said PowerPC was dead? 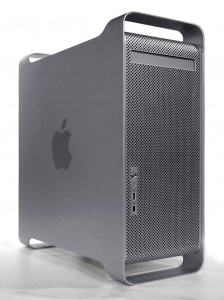 I recently contributed to a MorphOS.pl bounty to help port MorphOS to an Apple PowerMac G5 machine. Wiktor "Pampers" Glowacki, the co-owner of the MorphOS.pl portal is supplying the PowerMac machine and Mark 'BigFoot' Olsen has undertaken the task of porting MorphOS. The 3000 Euros needed to open the Bounty was donated in record time and the G5 machine is being shipped to South Africa, where Mark Olsen currently lives. Under the requirements of the bounty Mark has to port MorphOS to a Power Mac G5 model from A1047 7,3 - M9747LL/A series within a 3 month time-frame from receipt of the donated hardware. If successful, he will take ownership of the PowerMac hardware. Although not required for the bounty, support of other PowerMac G5 models is not precluded. However, support for the Bluetooth module, the AirPort (WiFi) module or multicore CPU support is not required.

In anticipation of the bounty being completed, and after taking advice on the correct model to purchase, I managed to track down a couple of reasonably priced G5 machines in New Zealand. 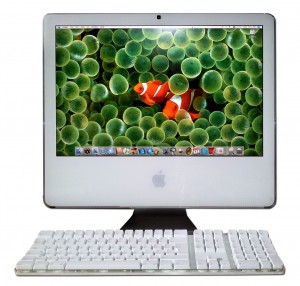 Unfortunately, I ran into a typical problem I've experienced when buying used hardware. One of the machines, an elegant iMac iSight was shipped in its original Apple packaging and arrived in good shape. However, the second machine, a very heavy 2.5Ghz PowerMac G5 brute was very poorly packed and arrived damaged with part of the metal frame bent where the box had been dropped in transit. Really annoying! Fortunately both machines still booted to Mac OSX OK but I was quite surprised how noisy the fans were on the PowerMac which constantly wound up and down as I put the machine under "stress" by browsing the web. No such issues with the iMac however. The moral of the story, if you going to buy any used hardware always ask the shipper to double box the package and use extra insulation to reduce the risk of damage in transit. As an Amiga collector I've lost count of the number of times I have received damaged items through the post, usually caused by a combination of inadequate packaging and heavy-handed couriers. "Soapbox" rant mode off.

As I sign off for the last time in 2012 all that remains to be said is Merry Christmas and a Happy New Year to one and all.