From the time I got my first HxC SD Floppy emulator I was a happy man and I always wanted to mod it inside my A600.
Mods were made in the past with me putting the HxC successfully inside my A600. LCD was mounted along with the buttons and where the floppy was... the HxC was placed leaving the SD card in the floppy disk slot.
Because I wasn't 100% fond of this mod, I re-cased my A600 and waited when the time comes to see again if and how I was gonna mess with HxC.
Some time ago, I gone into slimming down the HxC and also changing the default LCD to a more tiny one just to gain as much height and space possible for a future mod.
I always wanted to put both the floppy and the HxC but space constraints on the little A600 DON'T even leave such a task to be achieved. On the past I thought about slim drives, but they seems more of a fuss instead of a solution...

Well... the time has come after seeing an EPIC thread of our fellow Amigan Orcish75 (a.k.a. Nigel).
I don't know how I missed this thread, but while searching for some floppy stuff etc... I saw this thread and I was amazed about the execution and Nigel's custom PCB and implementation.
I had to PM him asking for further info, and if he could provide me with one of his adapters!
Luckily Nigel had some spare adapters which he sent me along with a slim floppy drive he had. I had a spare slim drive from some old SBC project that required such drive with ribbon, but having one more wasn't bad :)
Nigel my friend... I can't thank you enough! You ROCK! :D

Anyway... adapter and floppy drive arrived some days looking like this... 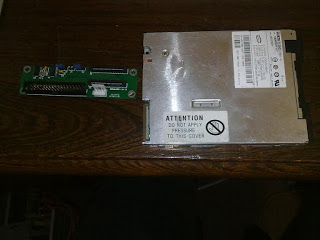 I won't explain what this adapter does as Nigel's thread pretty much covers everything but you can see the 26pin connector for 2x slim floppies.

So... after testing the floppy and my own slim floppy on my A600 as DF0 I realized that the adapter was working! AWESOME!
To be able to test if DF1 connector worked, I needed to get 2 signals as Nigel said on his thead from the external 23pin disk drive connector. Judging from his pictures I saw that the lower 3rd and 5th pin, needed to be tied to the lower 3rd and 7th pin on the 34pin internal floppy connector (as the custom PCB takes advantage of these 2 signals without having to get extra wires to the PCB).
I then modded my own connector like this... 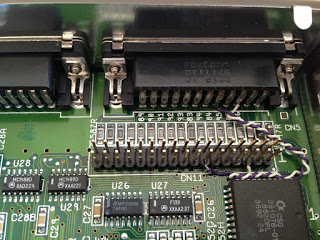 Ok now I new that the floppies plus the adapter was working just fine. What about the HxC that has an 34pin connector and not an 26pin ribbon connector though?
After a LOT of searching Google around... I found 2 websites that I thought that corresponded as close to what I was looking for

Of course to double check if my diagram was correct, I made a continuity test with my multimeter checking Nigel's 26pin connector with the 34pin connector. Every pin was a match so I though... what the hell... lets do this!
This is when it comes to soldering like the freak... 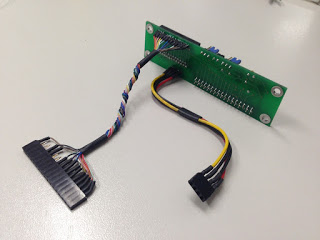 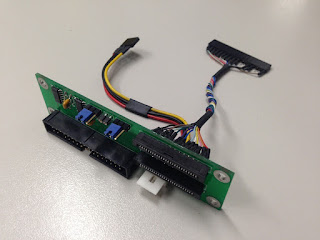 Now I had the connector with header to the HxC as DF0 with proper 17pin connector (the rest 17pins - lower row are all GND signals so I left them untouched) and the power connector.
After putting them temporarily on my A600... IT WORKED!!! Damn I was such a happy man :)
You can see from the picture bellow an image of Hybris loaded via HxC (DF0) and a network drive floppy (DF1) working simultaneously on my Amiga. 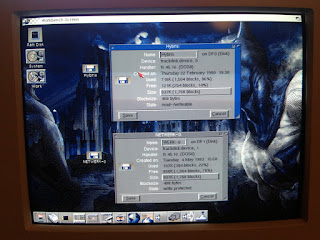 OK, adapter and floppy works! How on earth can you put both the HxC and Floppy and also the adapter? Too much cabling involved I tell ya!

I thought at first to use a base from an old broken floppy drive that I had. This is what it's case looked like... 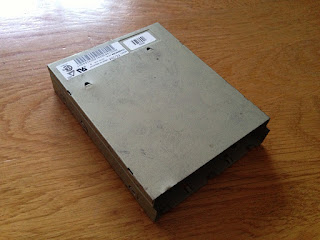 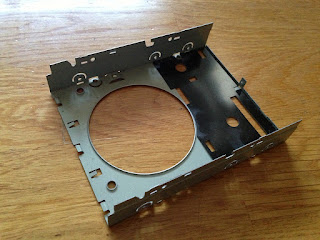 And after a bit of Dremeling, sanding and spraying... this is how it turned out to be :) 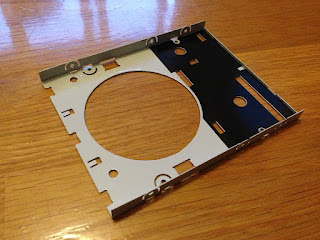 This is how I mounted temporarily the modded and slimmed down HxC and Nigel's adapter... 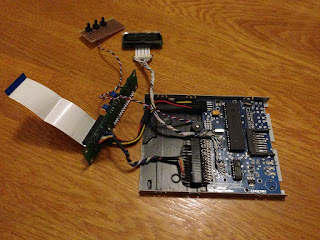 ...and this is installed on my A600. Can you now realize how much cabling it's involved? Wait... you haven't seen anything YET :) 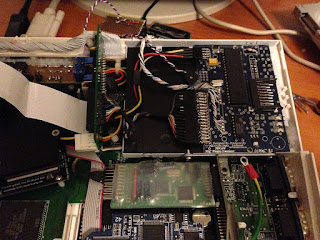 This is how I putted the my own slim floppy drive on top... 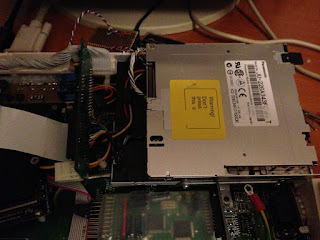 ...and a comparison of the whole unit comparing it with my previous original Panasonic drive. 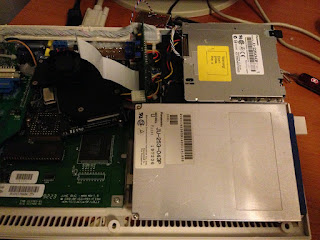 As you can see from the previous pictures I putted Nigel's adapter vertically for tests. Sadly... case couldn't close with the adapter on... so I had to use a different approach (as Nigel did on the EAB thread) by putting the adapter horizontally.
One other thing I noticed, is that the ribbon was screwing me BIG TIME. Sadly my own drive had the ribbon on the left side of the drive, while Nigel's TEAC floppy had it on the right side. I could have used Nigel's floppy but my own, was a about 2 fingers shorter which gave me the advantage of ease of installation due to space requirements... OK I had to reallocate the 26pin connector OR I had to buy a really long 26pin ribbon... and fold it numerous times in order to come to the desired location. Thank God I had a spare 26pin connector from an adapter I had in the past...
Time for another EPIC soldering a.k.a. waste of time and energy... but essential in this case. Here you can see the front and back part of my 26pin connector extension... 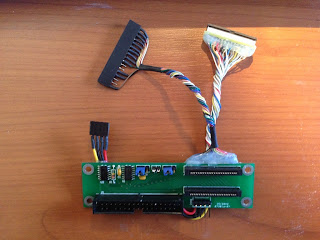 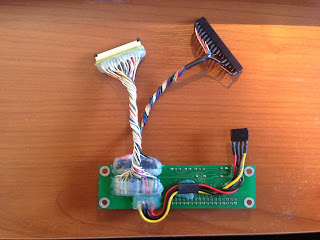 I also cut a bit of the metallic base and instead added a plastic extension based on an CD jewel case (LOL). You can't say I'm not creative :) 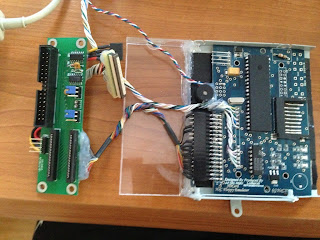 ...and this is how it looks with the adapter hot glued in place! 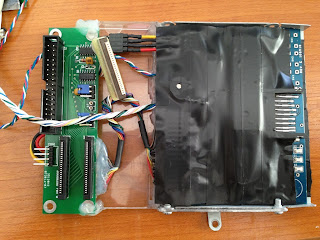 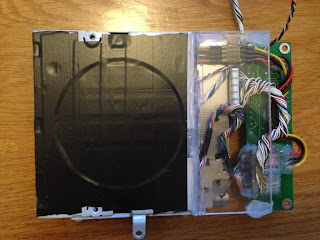 ...and finally, attached to the Amiga. Floppy was attached temporarily with a bit of hotglue on the side for me to be able to measure EXACTLY how the orientation of the drive had to be in order for the front slot to be 100% operational. 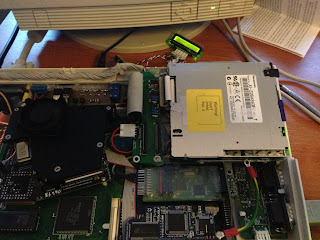 After realizing what I needed to do and cut... the painful time of Dremeling, sanding and re-spraying occured a numerous times after I finalized where the floppy had to be placed. Once I was ready I used an instant glue to hold the drive in place and then I applied some hotglue on various points and in hole perimeter for drive to be rock stable. This is the final version of the combo looks like! 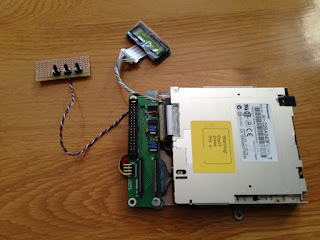 Comparing it with the original floppy drive from the side and from the front... 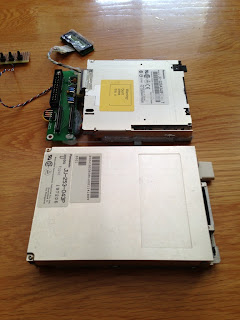 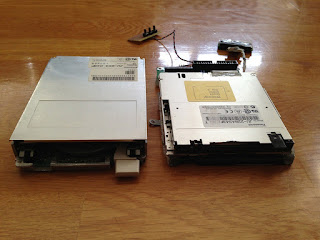 Ok, another crappy job was doing the holes for the HxC navigation buttons... I did it in the past, and these things need much attention if you want to do them properly without  them looking crappy.
I decided this time that I didn't want them to be put on the top of the case, but somewhere more elegantly without showing. Also I wanted them to be close to the floppy... so the only good spot that I found... was under the floppy where the little triangle on the back resides, and this is where I drilled :) 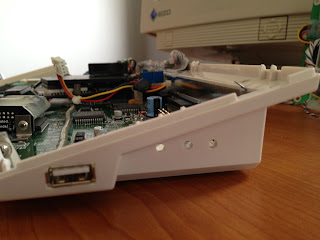 I had to put new momentary switches as the ones that I had already soldered in the mini veroboard, wouldn't fit, so I putted them individually applying a bit of instant glue on the corners of each button, holding them together in place. 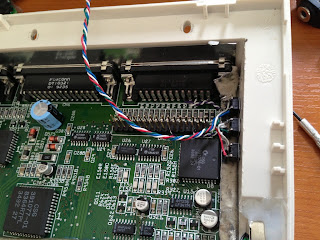 ...and of course hotglued them once they were steady and in position. 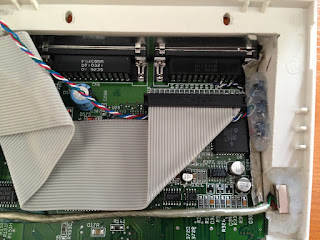 This is the final result :) 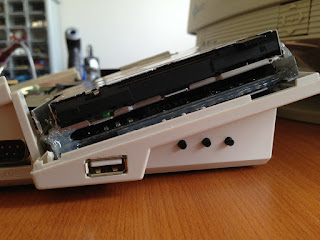 You might remember my old case that I kept in case I wanted to try new things... Well, it came handy for measuring where to cut the case for the eject button. Well.. the hole is rather CRAPY but it's just a test case. I will be more discreet and more PRO when I'll cut the original case of mine... but we'll cover that in "Part 2".
You can see how well the alignment of the floppy drive went! 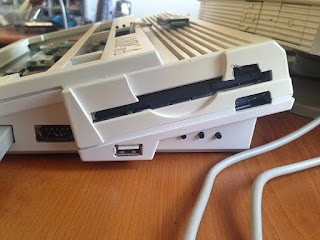 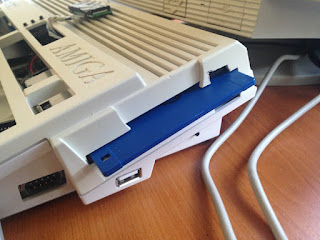 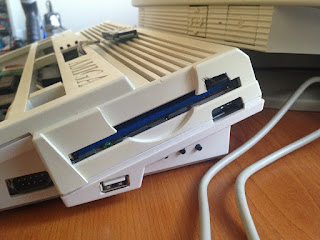 Before I end this part, a panoramic picture of my old upper case, without the keyboard in place for better viewing and how the LCD looks comparing to the old BIG LCD :) 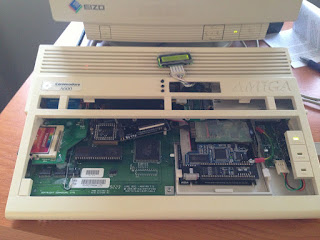 Stay tuned for next part soon :)