So, I haven't done much lately on JAmiga, but I'd thought I at least give you something to play with. I've prepared an archive with everything you need to install a Java environment on AmigaOS 4.

And first of all: its still considered beta!

Here are the downloads:

The installation of the main JAmiga archive is pretty straight forward. Just unpack and stat the installer. The "installation" of the silly Twitter client is also easy - just unpack to wherever you want it.

I say silly Twitter client, because it is. To be totally honest, this entire release is a bit silly, at least from a user perspective. Not that JAmiga doesn't work - it does indeed work. Only that we don't have so much content to play with. My hope is however that someone with some Java skills will start developing, or find some novel stuff we can run. The source code for my silly Twitter client is included. And you get a Java compiler in the installation! So its only a matter of starting to develop and do stuff better! 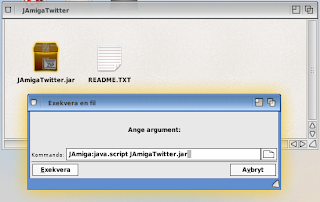 You'll be asked for input. This first time you can simply run it, and you'll eventually be presented with some info on how to make it do stuff. Notice the "eventually" - depending on your machine it might take a while to start it, and there's no splash screen. (On my A1XE it starts in 5 seconds, and on my X1000 in like 3 seconds.)

The first you have to do is to allow the Java Twitter client to access your data.
Double click JAmigaTwitter.jar again. But this time, enter "auth" at the end of the input.

You can of course start the JAmiga from the Shell. You simply point to your JAR file from the java.script:

With the client you can post status updates on your wall (or whatever it's called on Twitter), fetch your status (Ousp. Just noticed that you can't fetch your own status, some sort of bug), and do query searchs. The query search returns some sort of HTML, and searching for Amiga will only get you spanish people looking for girls.

I will continue to update and improve JAmiga, as well as create some Java content. Even if I named this a silly release, I wanted to get it out there for you to test and play with. Hopefully all you Amiga Java coders will find it nice to play with. I will try to produce some tutorials on how to get started coding little Java applications. If you have questions, don't hesitate to ask me.