While not quite Homer's Odyssey, Roman Kargin (kas1e) has released his own version of the Odyssey for AmigaOS4.1. Unlike Homer's epic Greek poem, Odyssey v1.23 is a relatively lightweight r155188 WebKit based browser which brings Javascript, CSS, DOM, SVG, Unicode, SSL and HTML5 Video/Audio support to AmigaOS4. Based on the source code released by Fabien Coeurjoly (Fab), who created the original version for MorphOS, Odyssey adds a host of new features including the ability to play html5 YouTube videos on AmigaOS 4 based systems. The AmigaOS 4 versions does not yet have spellchecker or plugin support but, it does include many other features such as improved ffmpeg, HTTP authentication, FTP and adblock. If you own an AmigaOS 4 machine and have not yet downloaded Odyssey please visit OS4Depot to get your hands on a free copy. You will need the latest version of AmigaOS 4.1 update 6 and MUI 4.0 and although it may take a little work to get some of html5 videos to play, a trip to the Amiga support forums should help. Of course you could also read the accompanying documentation.

A combination of spoofing the Browser as an iPad and applying some special scripts will usually allow you to play most YouTube html5 videos in full screen mode. Odyssey 1.23 does not automatically play Flash videos but, with more videos being uploaded in html5 format this should be less of an issue in the future.

Of course playing Flash or html5 YouTube videos is not such a big deal on other mainstream computer platforms. However when you consider the massive resources behind mainstream systems it's really no surprise. I sometimes read comments comparing the speed of Linux development with that of AmigaOS 4 and other next generation Amiga-like operating systems like MorphOS and AROS. What some people seem to forget is that even  Linux is financially backed by some of the worlds largest and most profitable corporations and that includes IBM and Google. Over the past eight years over 10,000 developers have contributed to the Linux kernel and in fact, in 2010, it was estimated that 75% of Linux kernel code was contributed by paid developers.

IBM itself has poured over $1 billion into Linux support for its hardware. Although we Amigans do not have access to such resources we are fortunate that we can use our next-generation AmigaOS and MorphOS machines to freely benefit from the work of these Linux developers.

Using the Live Ubuntu Remix DVD  I have been able to watch html5 and Flash YouTube videos in Firefox via ViewTube and even play HD videos. There is also MiniTube, an excellent standalone programs which also plays most YouTube videos.

, I still like to take advantage of running Linux on my AmigaONE X1000. I hope to do the same on my Cyrus+ based AmigaONE X5000 when it's released. Just to whet your appetite here is a recent photo of Debian X running on the Cyrus+ test-bed at Ultra Varisys.

I don't believe it! 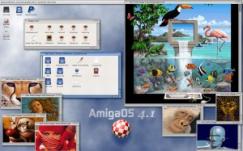 If you are a regular reader of my blog you may recall that just over a year ago I posted a link to TAWS, Micahel Rupp's amazing "Amiga in a browser" simulation. Well that link no longer works but that does not mean Michael has stopped working on his TAWS project. His latest implementation has a very realistic, if a little slow, version of AmigaOS4.1 complete with the initial AmigaOS 4.1 splash screen.

Windows transparency works as does screen-dragging and if you are nostalgic for one of the Classic Amiga Workbench displays, he has included a number of pre-sets Workbench modes and, at the click of an icon, you can change to the iconic blue, black, orange and white display of WB1.0 or the cool grey, blue, black and white of WB 3.1. In total there are eleven Workbench modes to choose from. He has even included some classic Amiga images to make you feel at home. OK, it's not really AmigaOS 4.1 and you can't run your AmigaOS software but it is a cool to see it running on my Windows PC.

I can even runs TAWS on Firefox with Ubuntu on my AmigaONE X1000 as well as under Timberwolf and Odyssey under AmigaOS 4.1 Now that's just too weird. 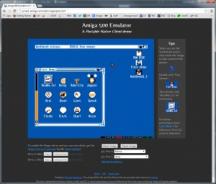 Amiga 500 emulation under Chrome on a PC

The emulator, which is descibed as a portable native client demo includes Commodore's original First Demos together with the Amiga ROM and Operating Systems files which are provided under license by Cloanto, the developers of the Amiga Forever package. If you want to run your own Classic Amiga programs you will need to purchase the Amiga Forever Essentials ROM licence from the Chrome webstore. (which in New Zealand is listed as NZ$1.19). The emulation feels a little slow on my PC but that could be because it's running at true A500 floppy disk speeds and I tend to turbo boost the FDD when I run Amiga emulation under Amiga Forever/WinUAE.

Never-the-less it's another good example of what can be achieved in a modern web browser.

Then again there is also Chipbench simulation by French developer Christophe Résigné which is a javascript remake of Workbench 1.3, complete with scan-lines, which runs in a browser window. These guys are just too clever for their own good!

The Wizard of Oz

Well perhaps not quite that Wizard, but AmigaOS developer and all round beta tester Tony Wyatt, also known as the Pieman following my revealing pictures of him at last year's AmiWest

, is organising an Amiga bash in Sydney, Australia around the weekend May 10th & 11th. Watch out for more news on the Amiga forums and come along to meet fellow Austral-amigans. I have already booked my flights.

Tony has also recently completed the AmigaOS 4 drivers (cfide.device) for the AmigaONE x1000 Compact Flash port. The CF port, which can already be accessed by CFE, the AmigaONE X1000's firmware, and Linux, can now be accessed under AmigaOS 4. 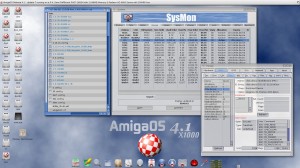 I tend to use the Compact Flash card on my X1000 to store all the the Linux test kernels so it good to know I can now copy updates to the CF card without have to boot up Linux. I'm please to report it recognises all of my CF cards which include 2GB, 8GB and 16GB models. The driver is currently undergoing beta testing and will be released to AmigaONE X1000 owners in the future.

Sometimes new does not mean better. Don't get me wrong, I'm not complaining about the speed or capacity of SATA hard disk or optical drives but give me a good old IDE connector any day.

OK perhaps they are large and clunky and it is easy to install them the wrong way round even though the connector is keyed, plus the added confusion over 40 and 80 wire cables but, once they are connected they stayed connected, even when you are rummaging around inside your Amiga installing the latest Zorro card or just trying to make your Classic Amiga boot for the umpteenth time by jiggling a few loose boards.

Not so with the delicate little SATA connector. Just look at it and it seems to fall out! Although the connectors are keyed so you can't install it the wrong way round, it's almost impossible to determine which is the correct orientation in the first place, unless you use a magnifying glass to find the little notch on the signal or PSU connector. You can get SATA cables with a right angle connector and others with a retaining clip which are a little better but overall they are just plain flaky! I apologise if I'm starting to sound like a grumpy old man. I suppose SATA connectors are designed for hardware which is never opened or upgraded, which is certainly not the case with the average Amigan.

Linus Torvald, the father of Linux, has just released version 3.14 of the Linux Kernel and I'm pleased to report that, thanks to the dedicated work of  the Christian Zigotzky, there is already a version for the AmigaONE X1000. Christian has also produced a 3.14 kernel for the P.A. Semi Electra board that we acquired recently. This board is being put through its paces by Alex Perez, the newest member of the A-EON core Linux support team. Alex is based in the San Francisco Bay area, the Amiga's original birthplace, although he did not get his first Amiga until 1985, a "new" old-stock A1200 purchased from Vesalia. His interest in retro-computing began almost as soon as he started computing. According to Alex, " I started tinkering with Linux and SunOS/Solaris back in the mid-90s, on some hand-me-down hardware. Compiling Linux kernels on a 386DX33 and an 80MB SCSI drive wasn't exactly fast, but I sure learned a lot." Alex also also made up for lost time with his Amiga passion and has since acquired a 68040 based A3000, a few A2000's and a couple of A1000's, one which served as the basis for his GBA1000 project.

He also own a fair amount of esoteric PowerPC hardware (reference boards, etc) and even a Dec Alpha AXP based machine. A regular visitor to AmiWest, in his day job he works in systems operation for a bay area start-up, where he in charge of planning, building out, and maintaining a Linux-based production server environment across several geographic locales. He has a lot of experience with a variety of Linux distributions, system/block level internals of the Linux kernel, packaging formats, building packages (both deb and rpm-based). Alex is the first US citizen in the A-EON Linux support team which also includes members from Germany, Eire, New Zealand, Australia and the UK. Alex is also a member of the Cyrus+ beta test team where he is looking forward to doing comparative testing under both OS4 and Linux, and possibly other supported BSD Operating Systems. All that is left to be said is: Alex, welcome to the team

By the way, thanks TommySammy for creating the Linux X1000 icon.

End of days for Windows XP

On April 8th Microsoft is officially ceasing all support for its Windows XP Operating System which is being retired. XP, which was released in 2001, was the first really stable version of Windows and helped Microsoft maintain and expand its world domination as the most popular desktop operation system. After April 8th Microsoft will stop issuing security updates for the estimated 500 million XP systems that are still up and running. It the short term this may not be an issue but over time these system will become at risk from the plague of viruses, ransomware, worms, Trojans, keystroke-loggers and anything else written to hack, infect, snoop or steal from users running Windows XP.

If you think this problem is none of your concern it is estimated that US Banks still run Windows XP on 95% of their ATMs and cash machines. I'm sure the figures are similar in the rest of the world. So even if you are not an Windows XP user its long shadow will continue to loom over you for several years to come. And what does Microsoft advise it customers to do after April the 8th? Check to see if their current PC will support Windows 8 and if not buy a new Windows 8 PC!

By the way if you think times are bad for Microsoft, its Windows OS in all its flavours still controls over 90% of the desktop OS market and, while the number of desktop PCs sold may be dropping in favour of tablets, smart phones and other devices, it still estimated that over  280 million units will be shipped this year. If only 0.1% of the machines were Amiga's............

Look our for issue #108 of Amiga Future Magazine. Apart form all the usual Amiga goodness you will find an update on the Cyrus+/AmigaONE X5000 progress and be able to read about what really happened to Digital Creations and Progressive Image Technology.