After a prompt by someone on IRC this week I decided to try to get my Gotek Floppy Drive Emulator working on my recently purchased Amiga 1000. 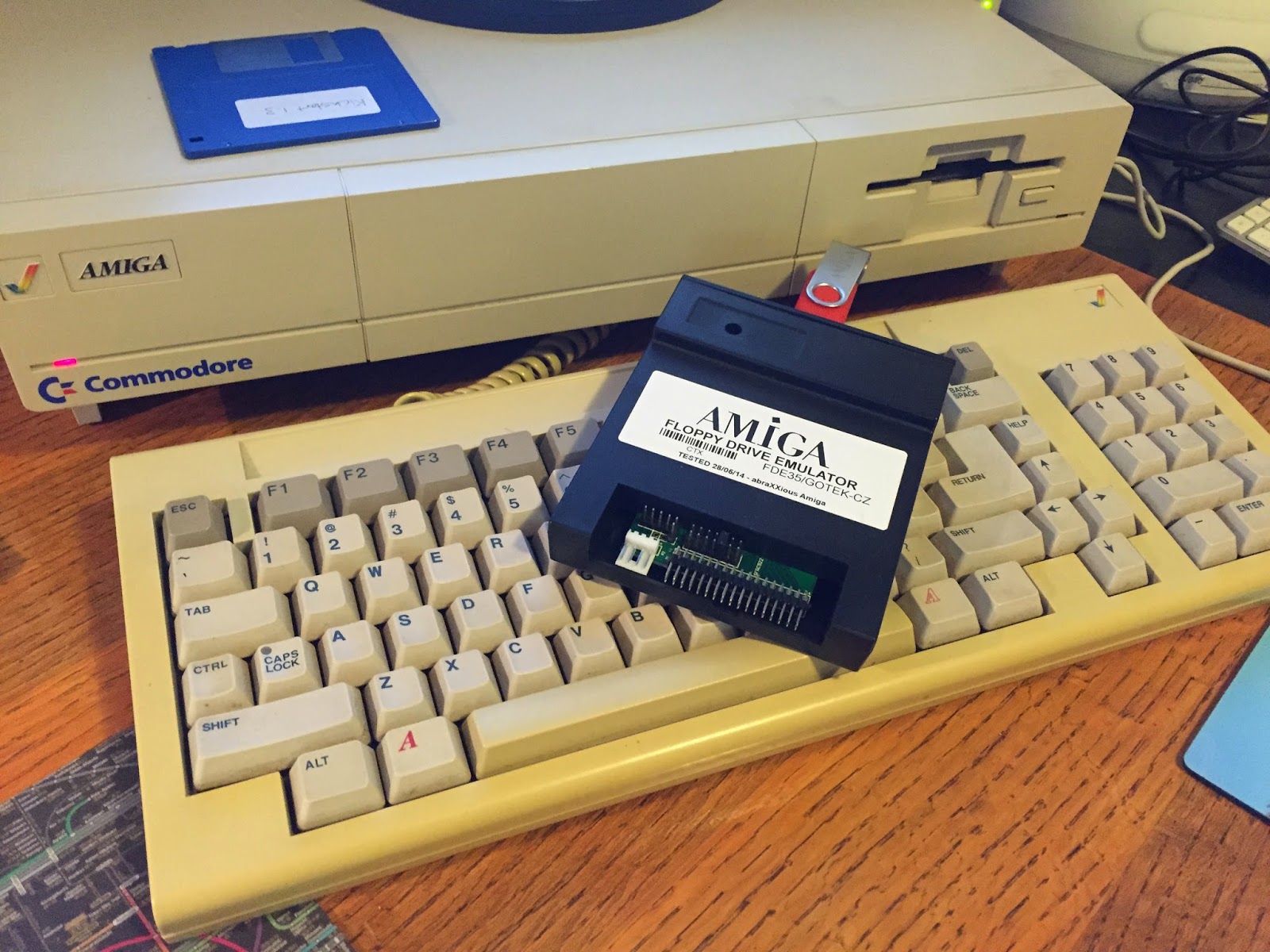 As I suspected before I started with this little mini project - there would be some tricks to get it working on an Amiga 1000 due to the need for the Kickstart disk before anything else could happen.

As regular readers of my blog would probably remember, last year I bought the Gotek Floppy Drive emulator and tried it out on my Amiga 600. That blog entry is here if you want to review it first as I cover the functionality of the Gotek in much more detail than I will here.

To start with, I took off the case, which marks the first time I have opened the Amiga 1000 since I got it. Once open I took a look at the case cover inside, and it does have all the signatures on it as I had seen in pictures elsewhere! I was glad to see it (All photos in this entry can be clicked to be expanded): 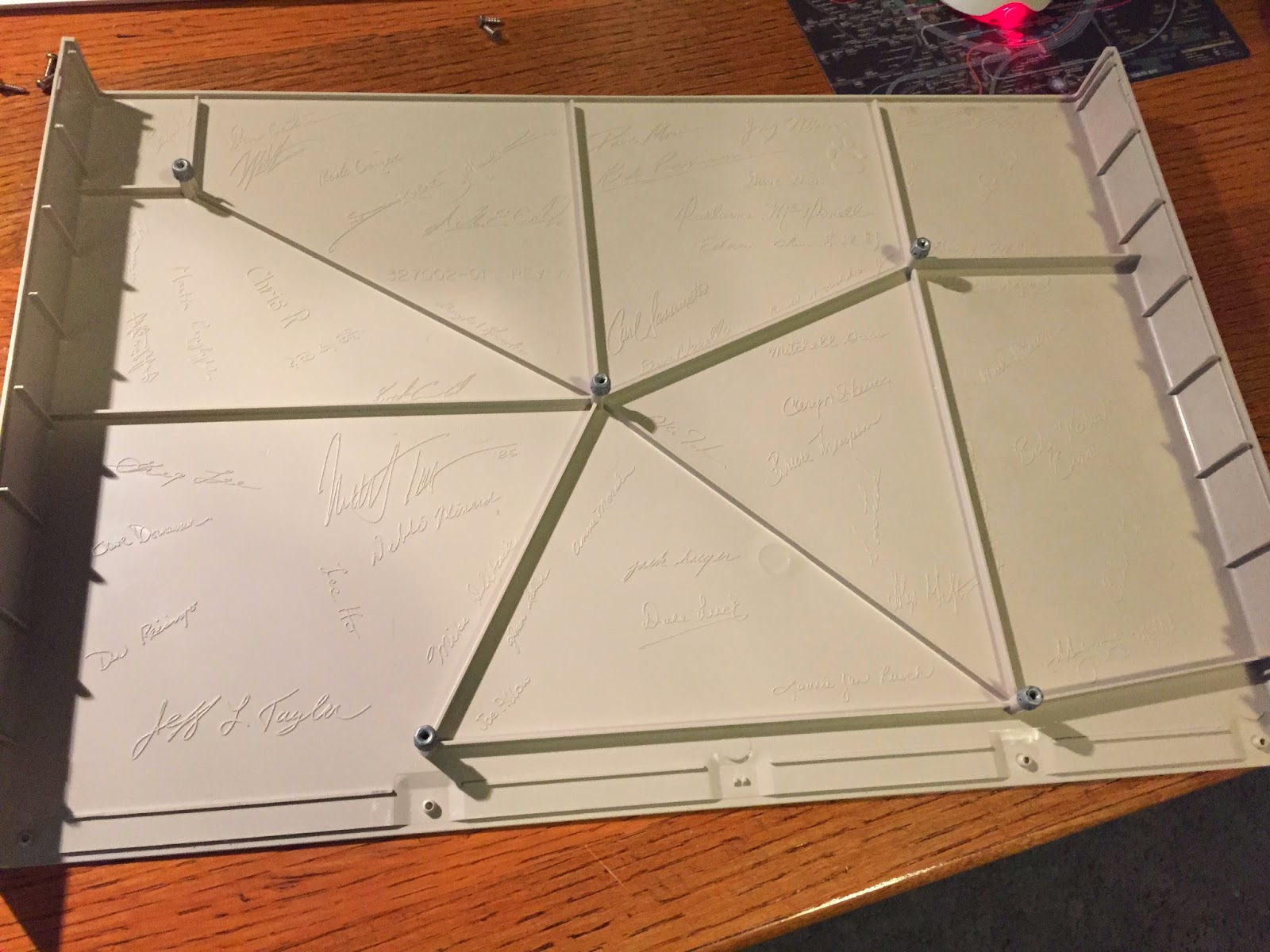 Closer view of the signatures: 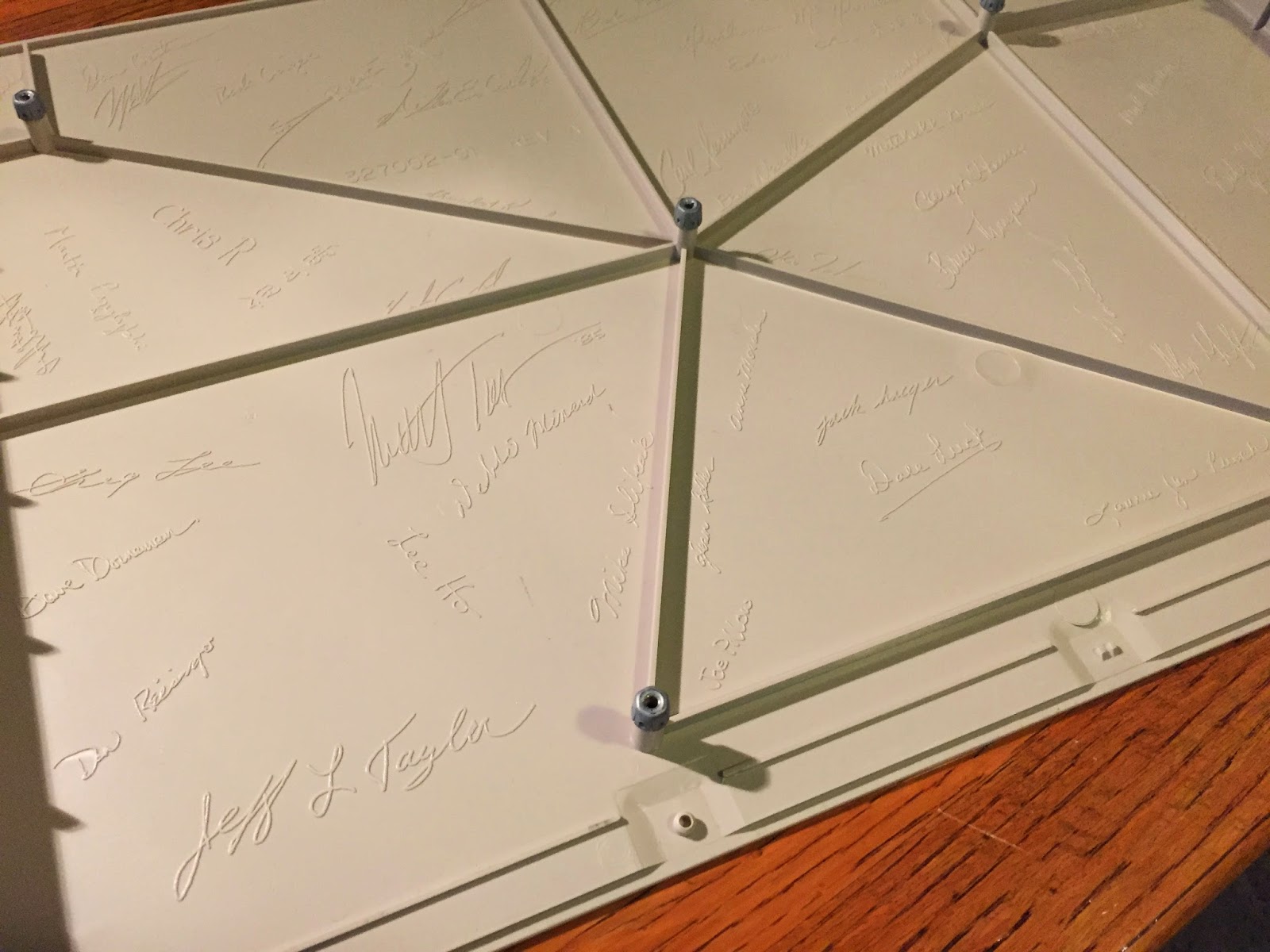 Jay Miner's signature and his dog Mitchy paw print are there too, of course: 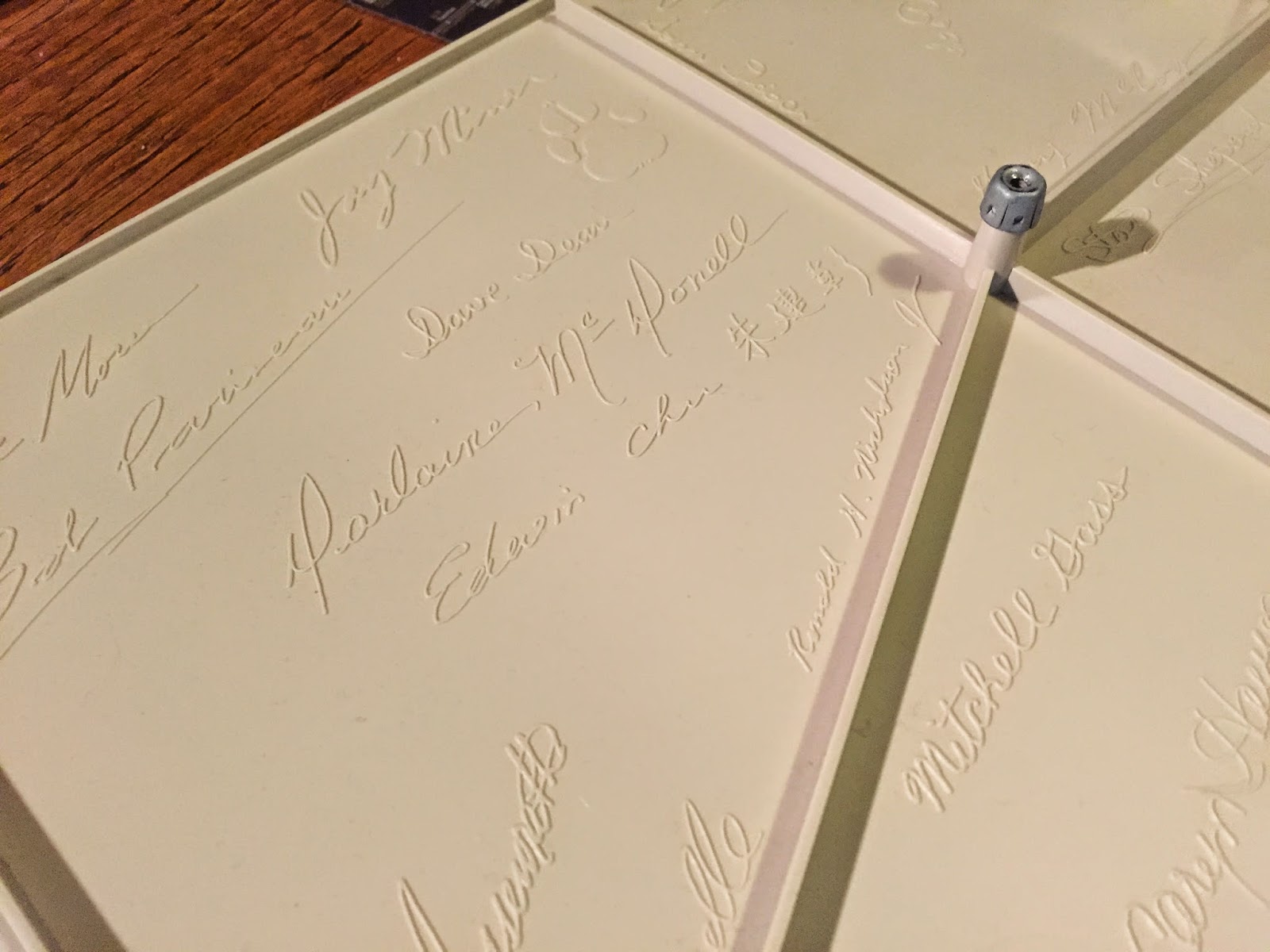 Looking at the Amiga 1000 internals, it has a big protective cover, much like the Amiga 1200 had when bought new. Just like that cover this one was also a pain to remove - lots of screws: 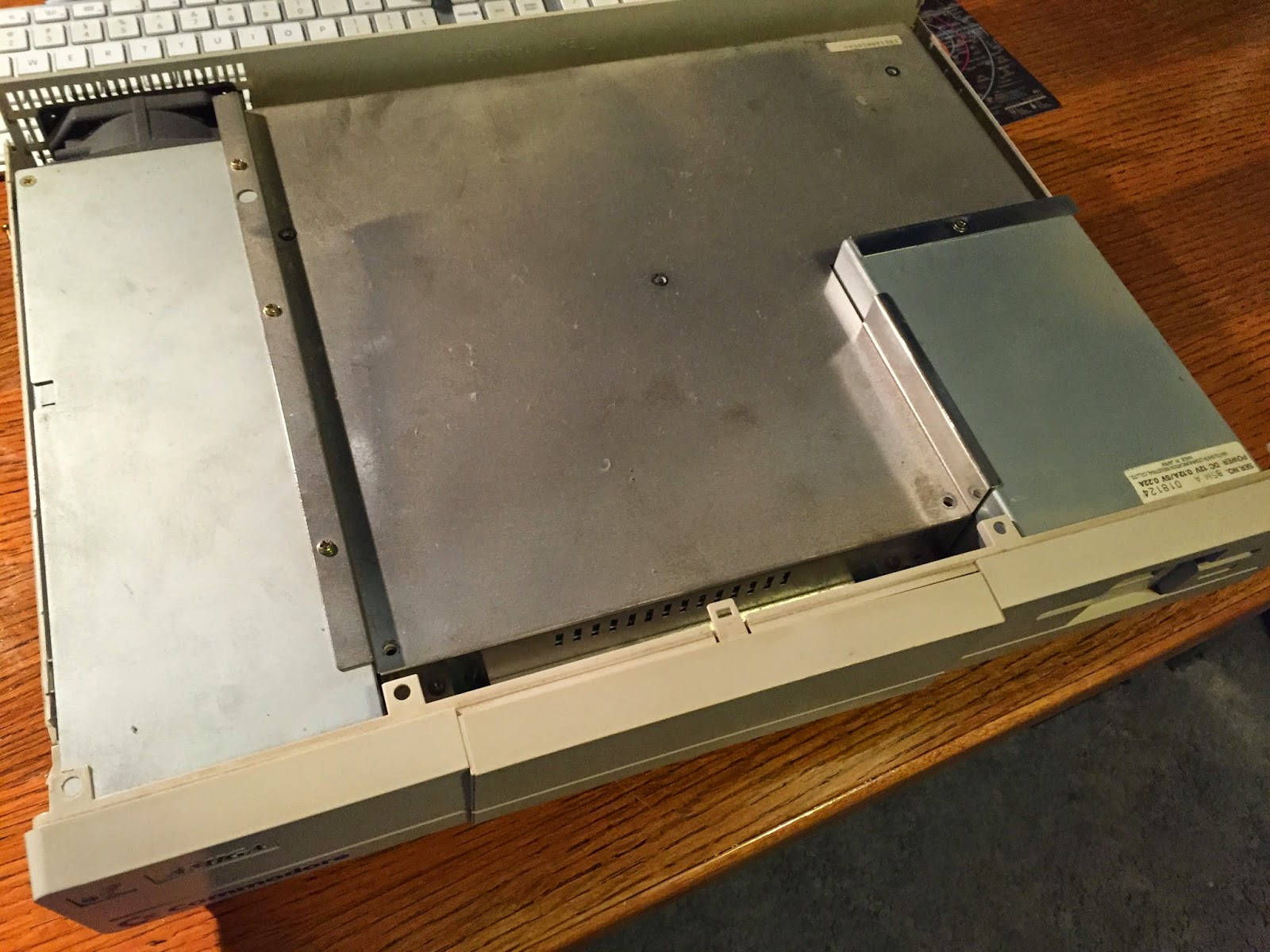 Eventually though I got the cover off, exposing the main Amiga 1000 motherboard: 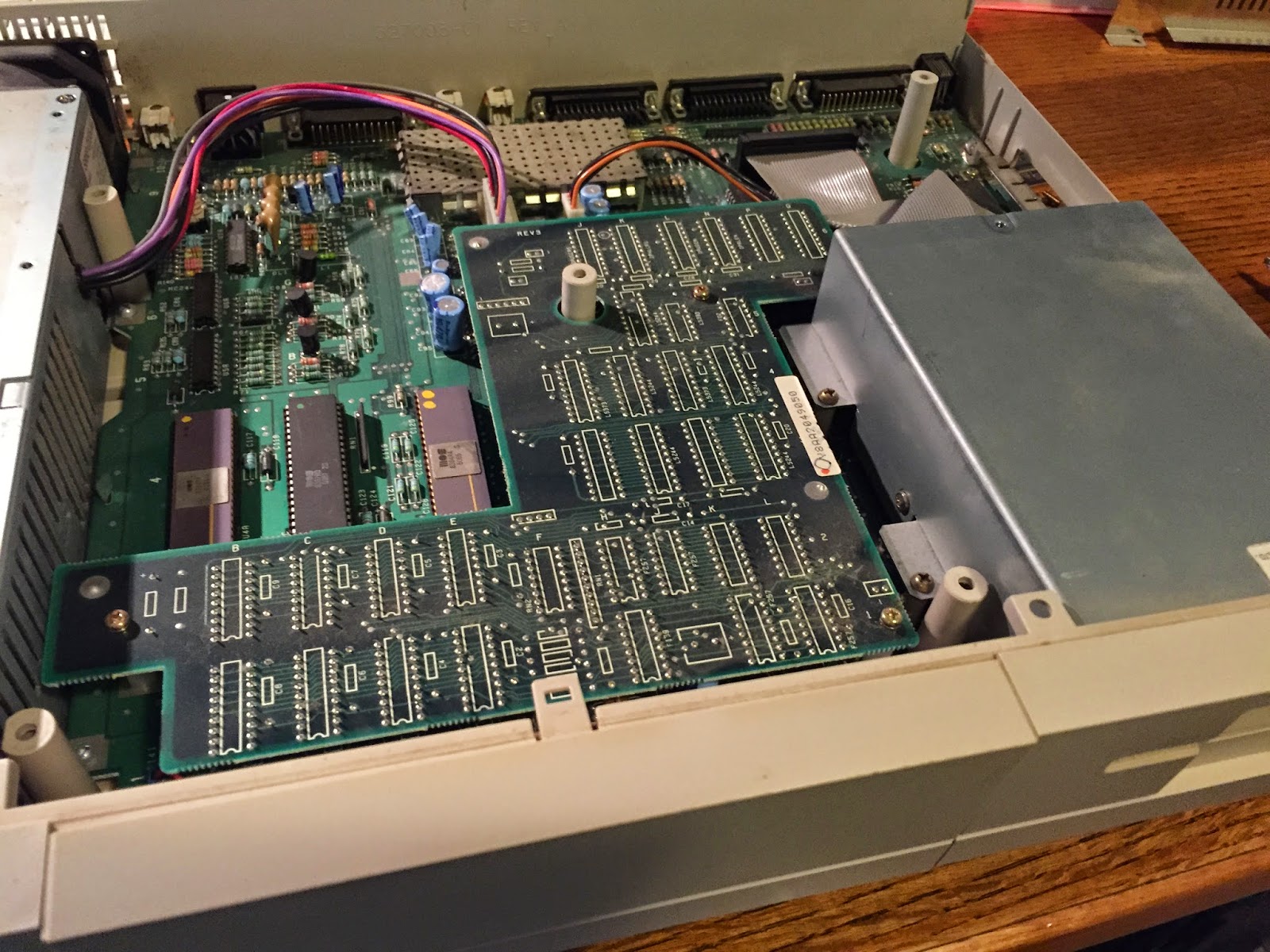 Some close up shots of the chips on the motherboard: 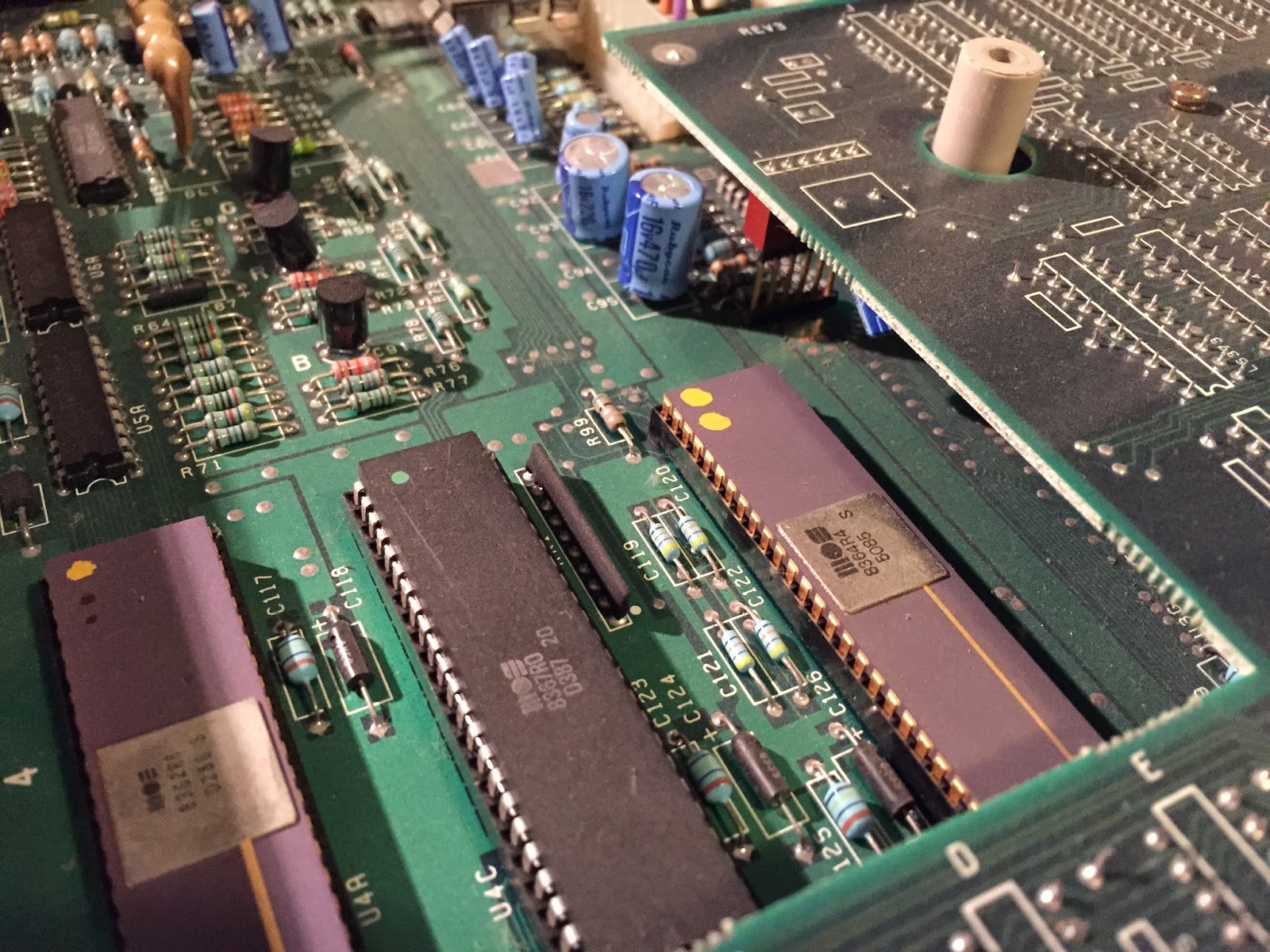 The inside is surprisingly clean considering it's age - it is 30 years old! The next close up shows the 68000 CPU, floppy drive cable and power cable. 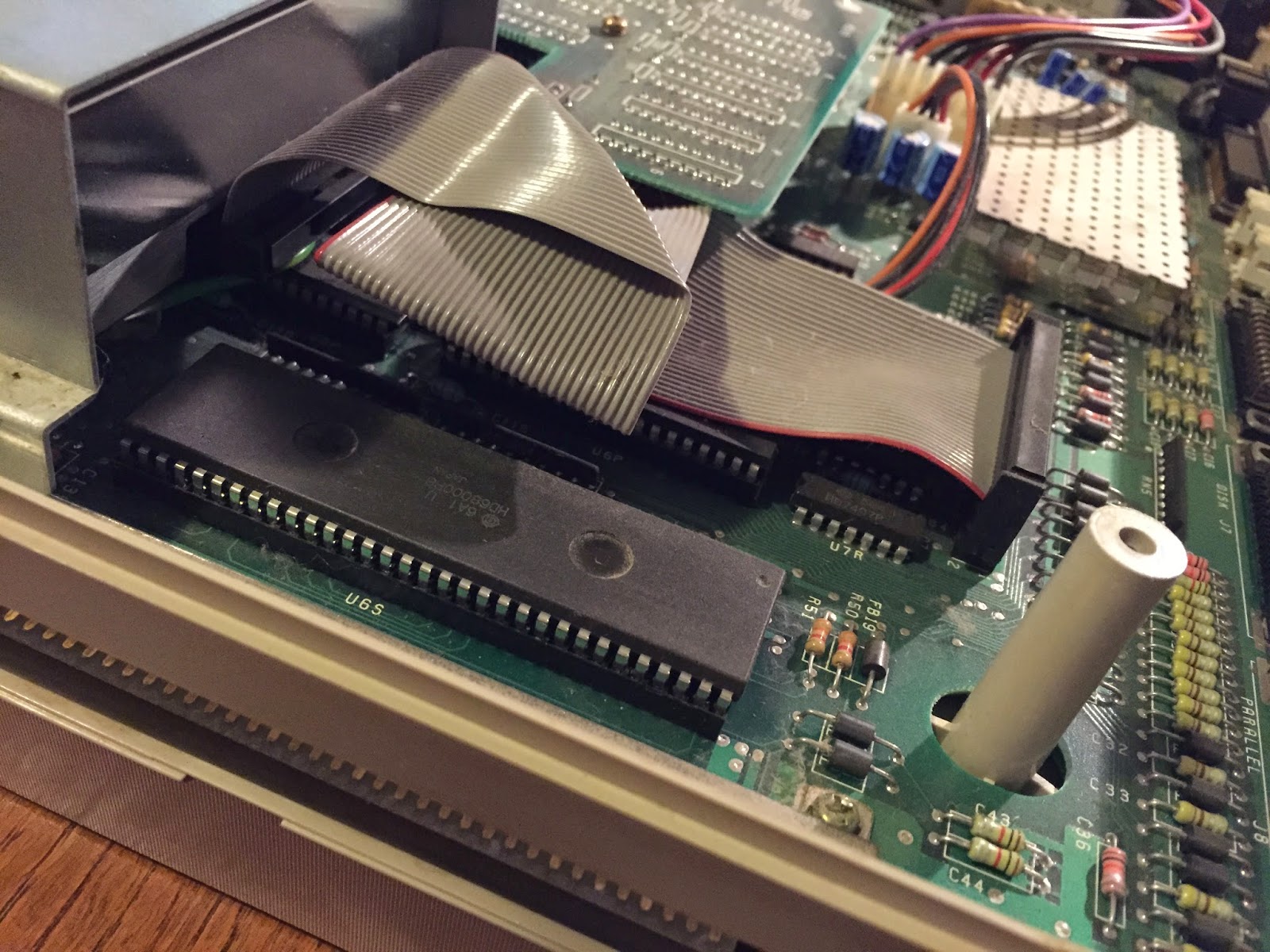 As discussed in my previous blog post on the Gotek, there is a selector.adf program on position 000 of the Gotek which enables you to select disks to assign to each slot on the Gotek. However, this selector.df needs the Kickstart to be loaded first on the Amiga 1000.

This means we need to assign the Kickstart 1.3 ADF on the Gotek using selector.adf to do that.

However, this is not possible to do on the Amiga 1000 itself because once I connect the Gotek and disconnect the floppy drive, there is no way to load the kickstart disk needed to then load the selector.ADF!!

Enter my trusty Amiga 600 to save the day. I connected the Gotek to it first so I could configure the Selector.adf on it to use the Kickstart 1.3 ADF in Slot 001, then save it: 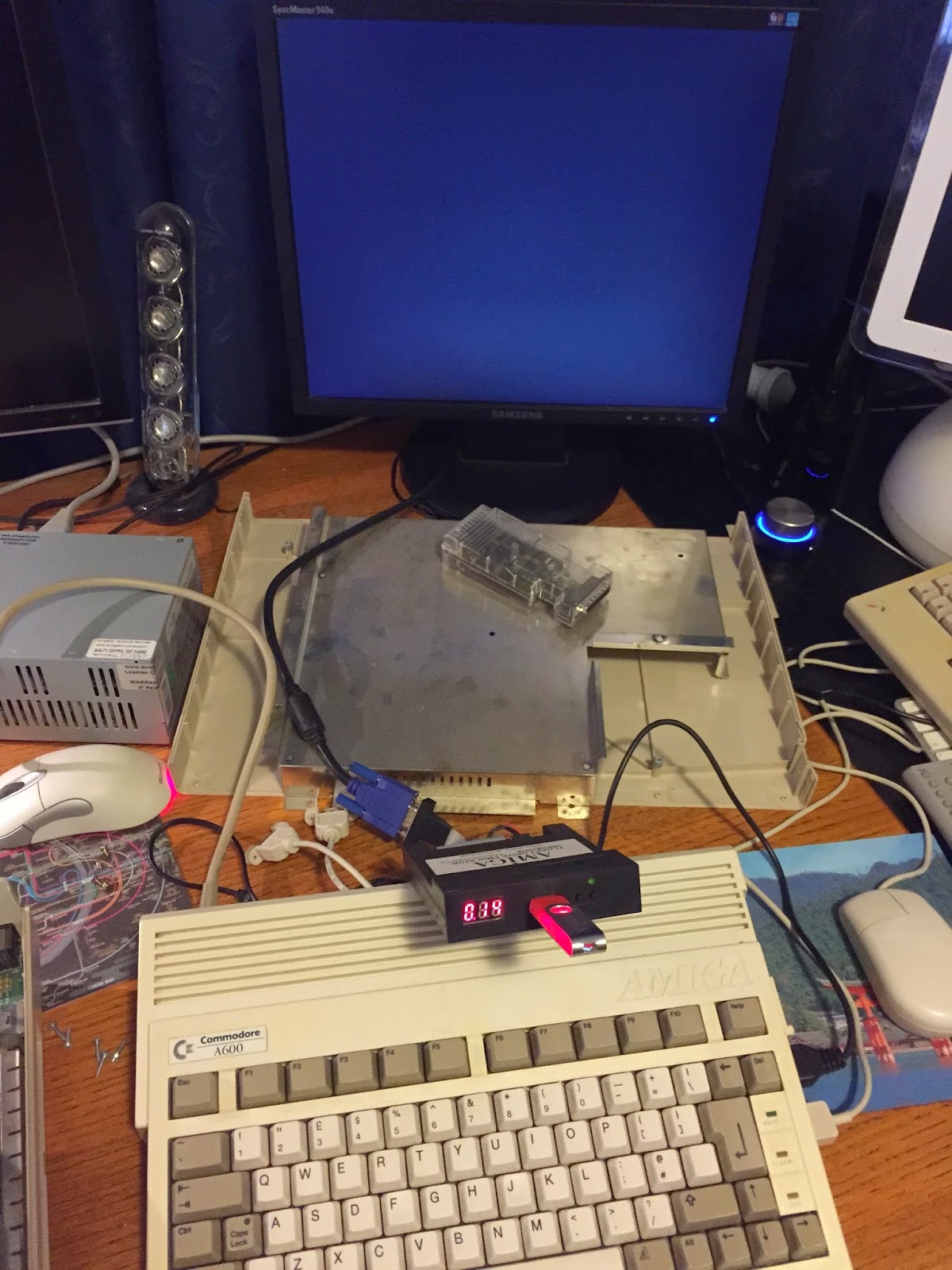 In case you are curious, in this shot of the selector.df on the Amiga 600 there is also the external scan doubler I use on the Amiga 1000: 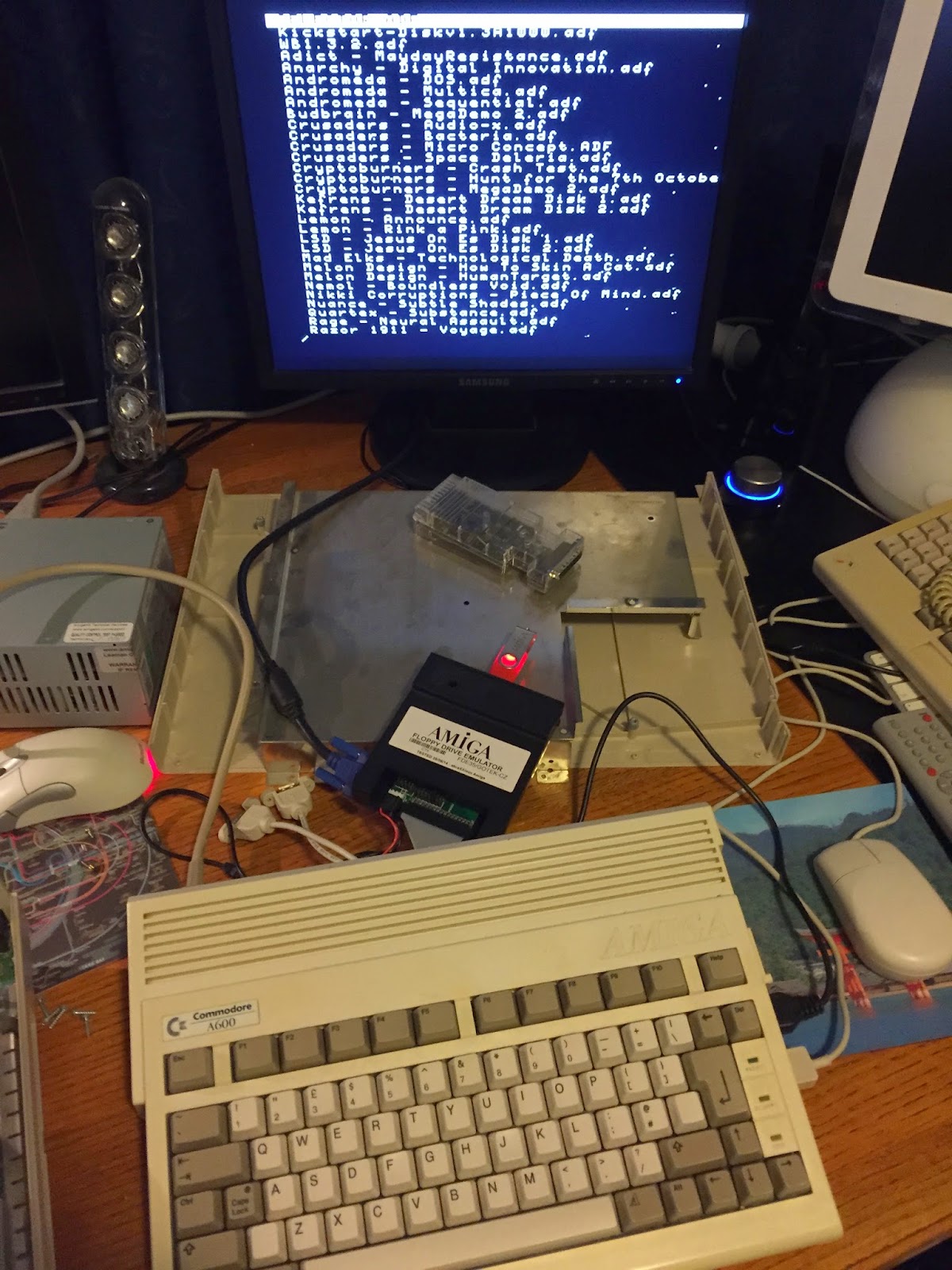 As you can see below I have now assigned Kickstart 1.3 ADF in Slot 001, ready: 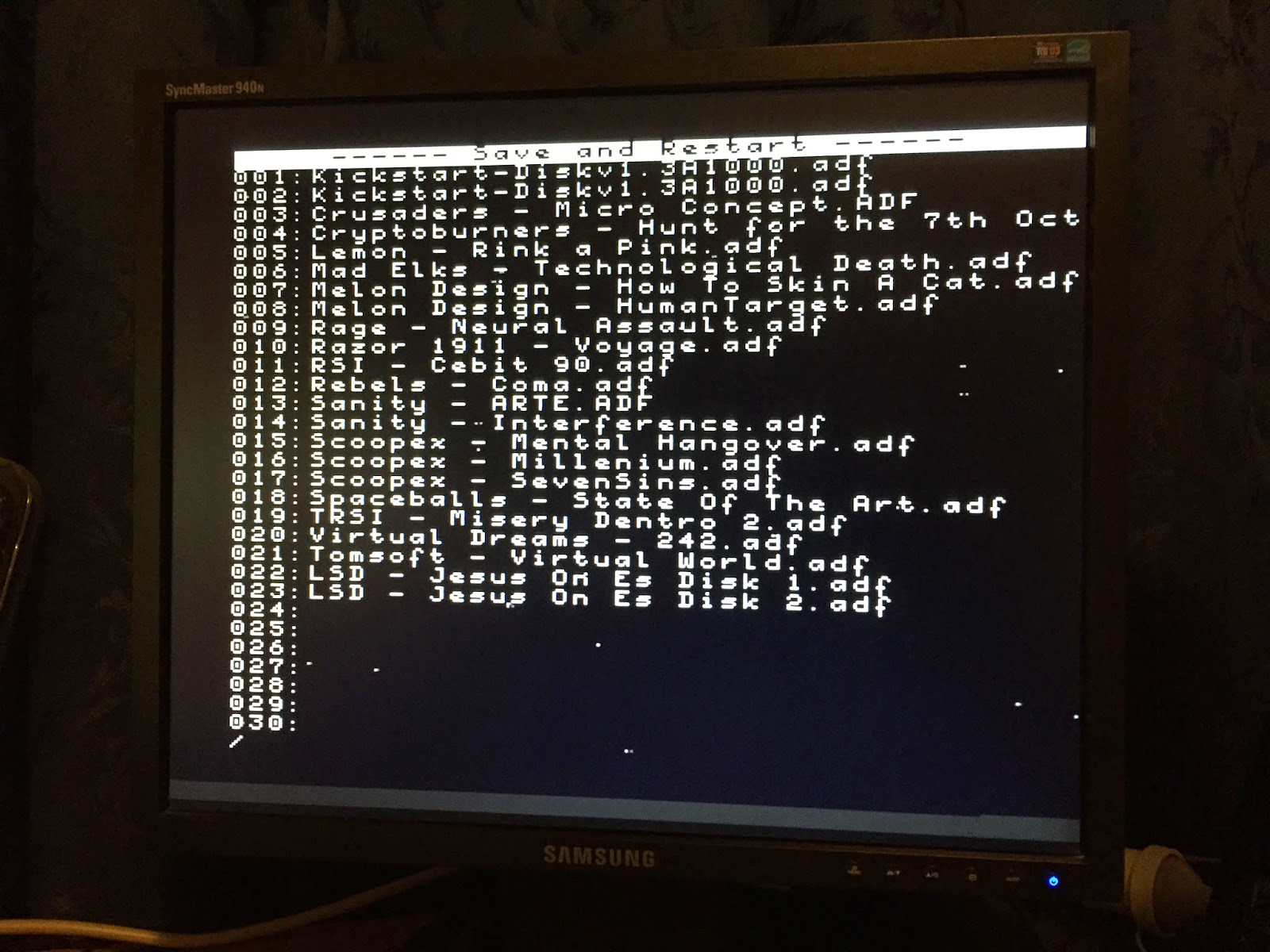 With that now done, I can now unplug the Gotek from the Amiga 600 - I no longer need the Amiga 600. I then connect the Gotek to the Amiga 1000 floppy drive cable and power as below: 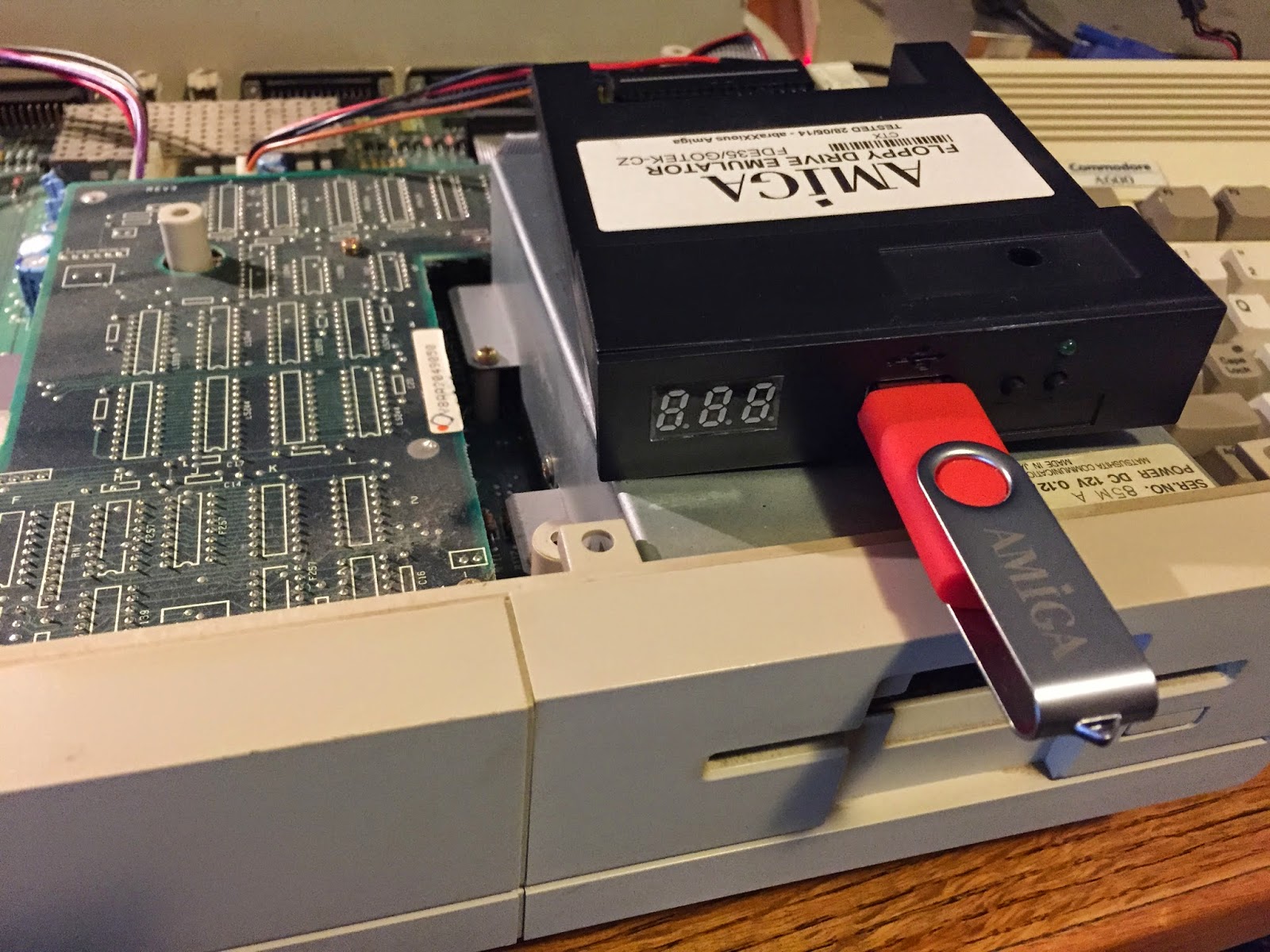 Another view of the connection: 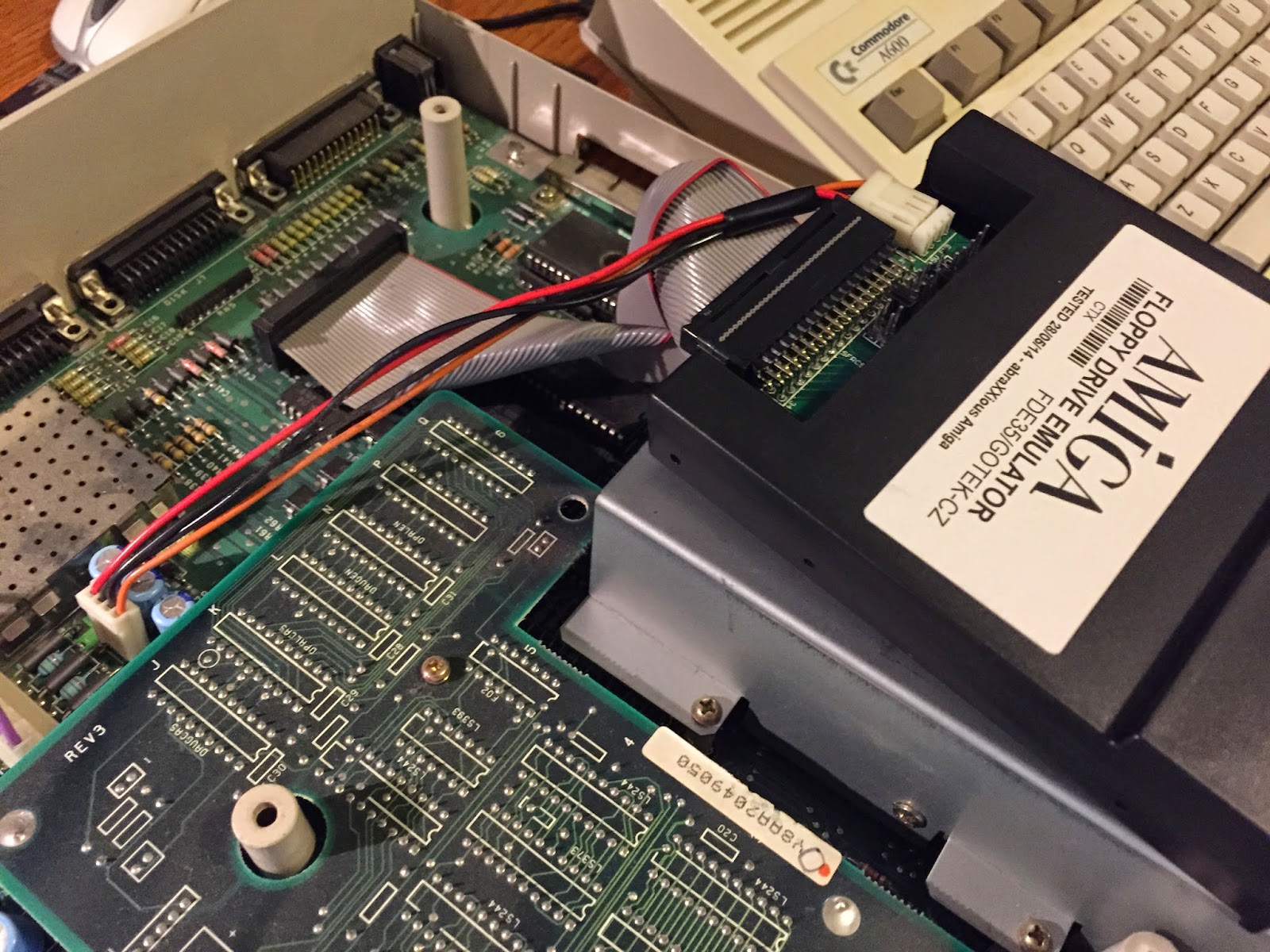 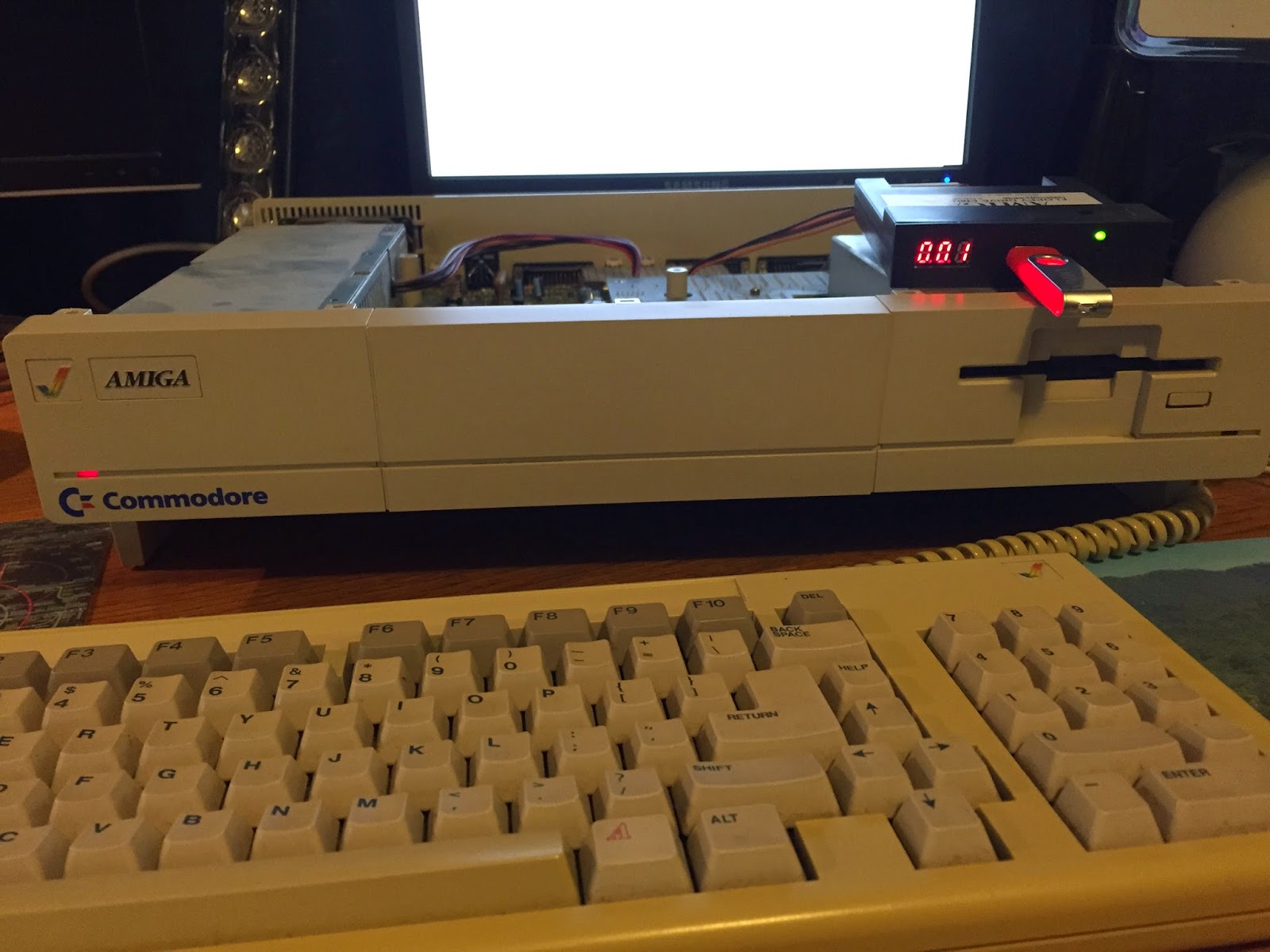 It automatically boots the kickstart 1.3 ADF from the Gotek and the next prompt I see is the Workbench 1.3 insert disk screen - fantastic - it works! 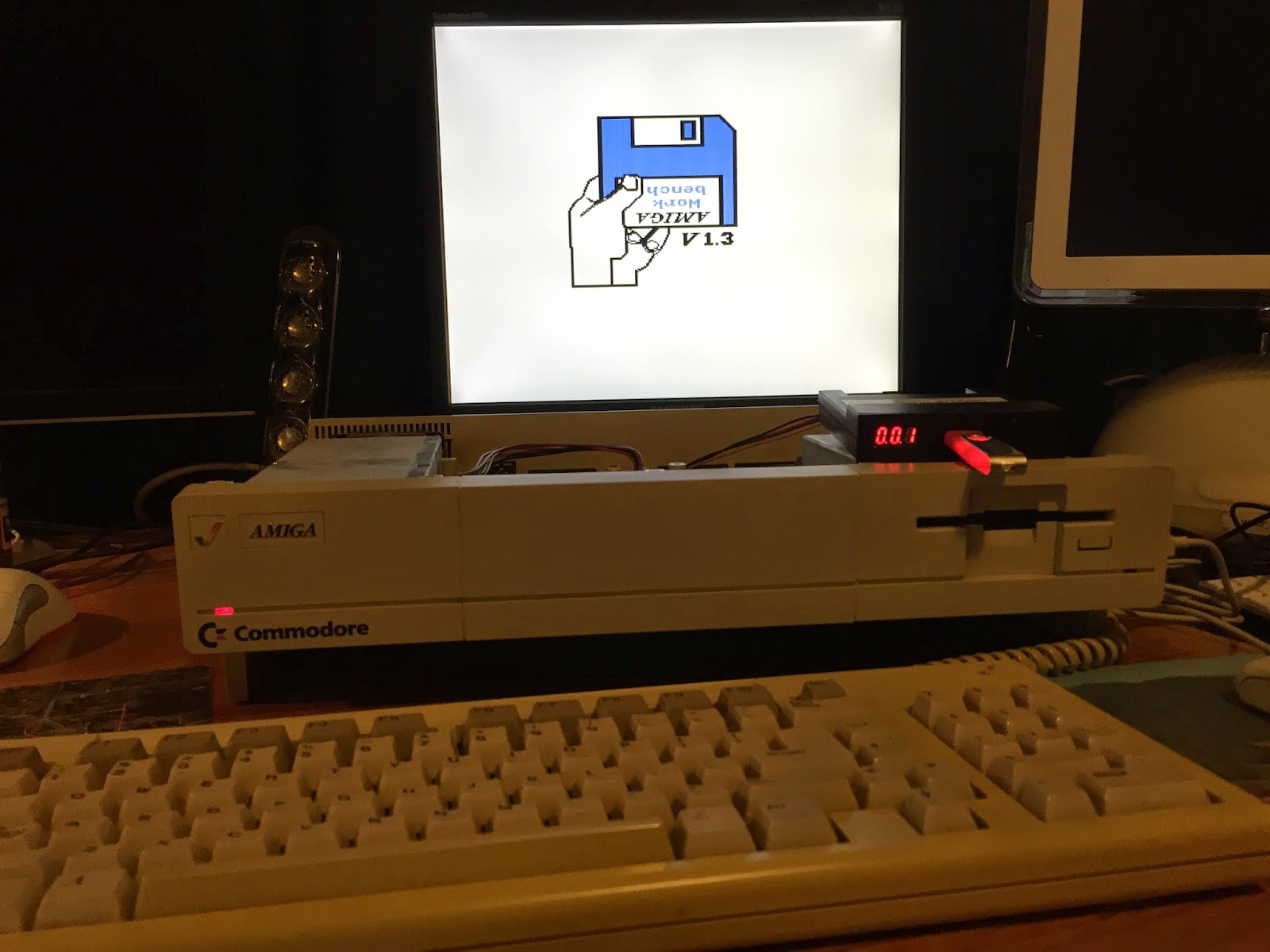 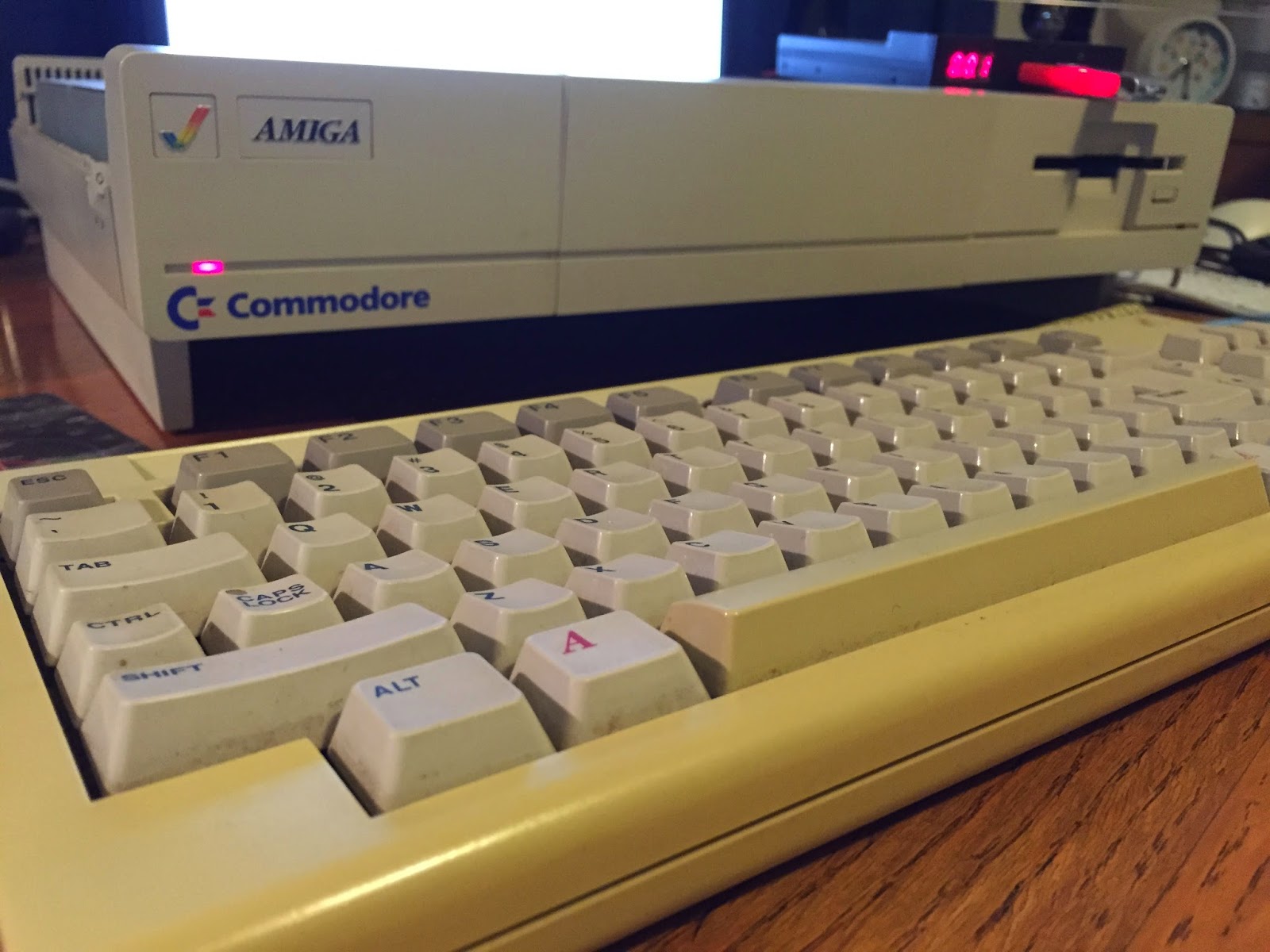 I then selected Slot 002 on the Gotek to boot Workbench 1.3 ADF which works well also: 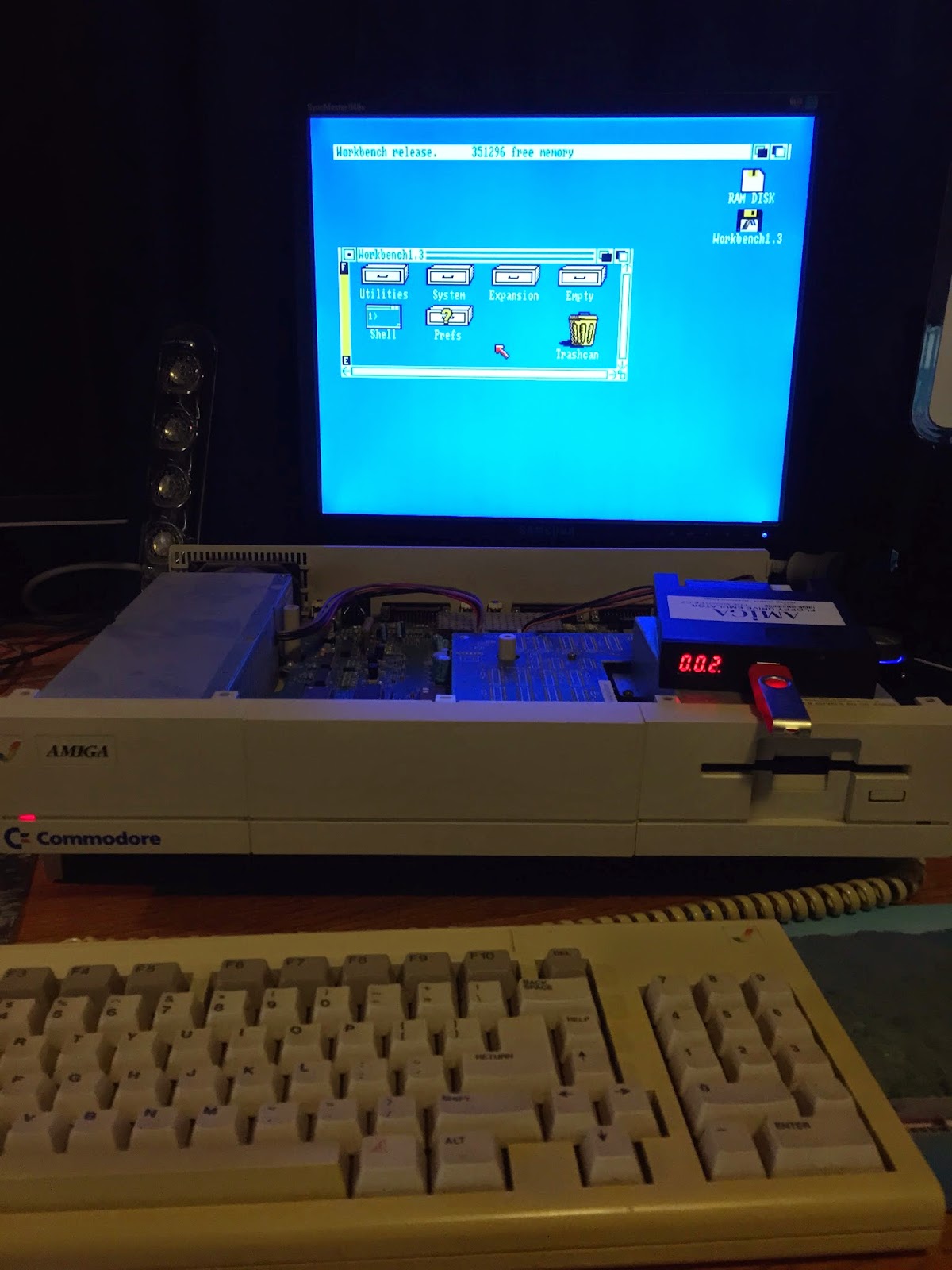 Exciting stuff. I reboot ready for the next test: 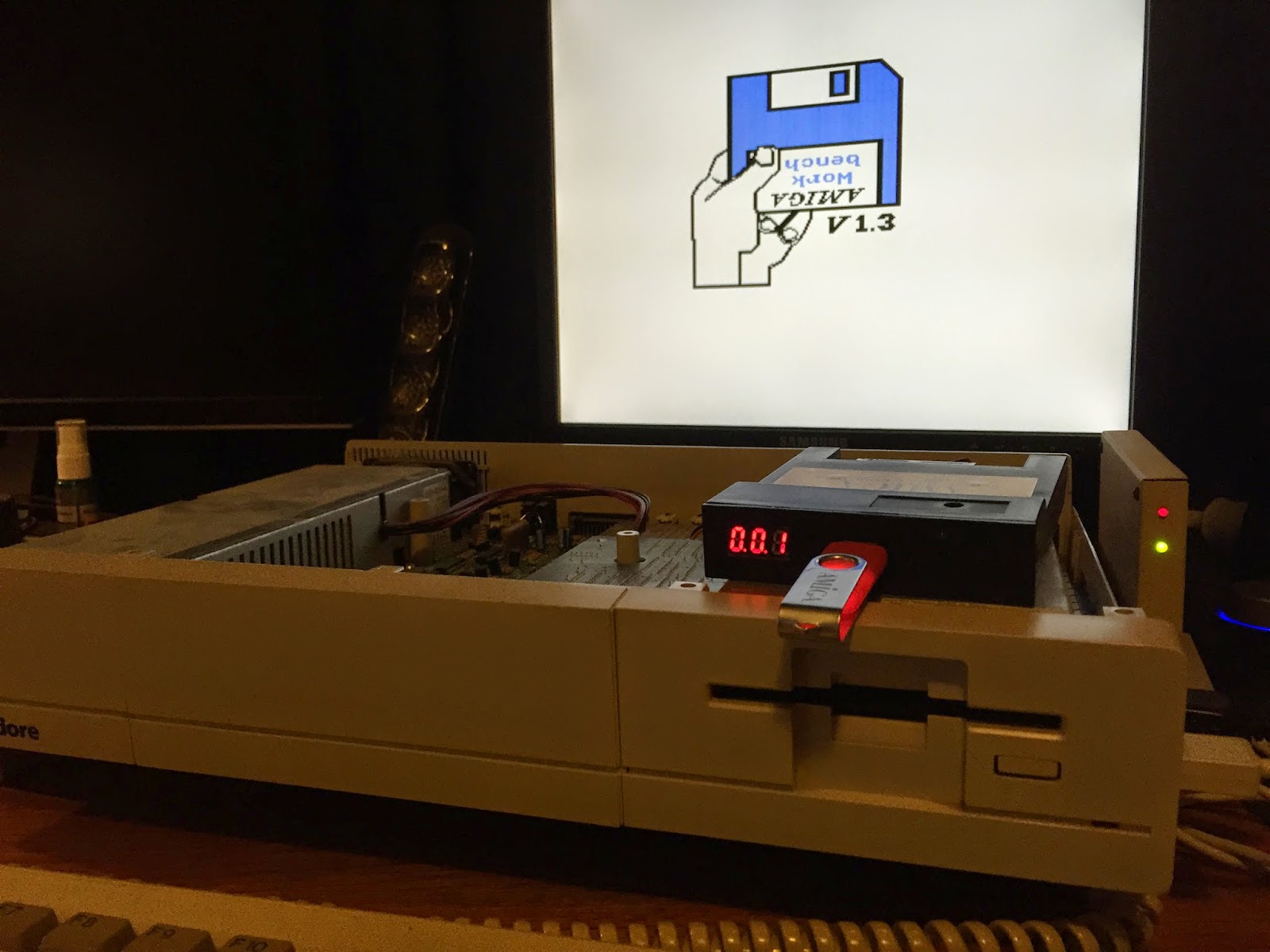 I run a classic Amiga demo ADF from a different slot (003) on the Gotek - Micro Concept by Crusaders - a great music disk: 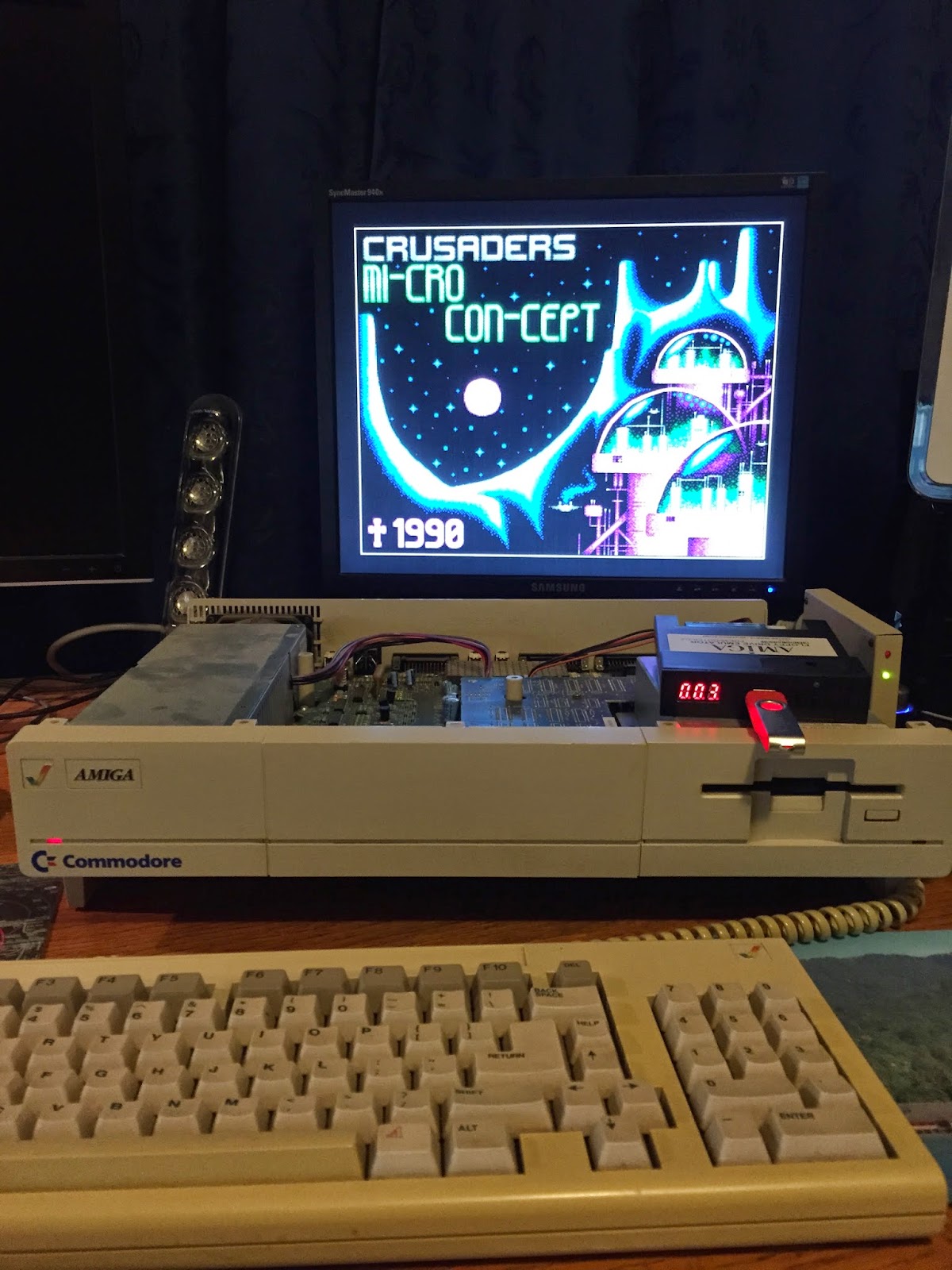 Some more demo ADF tests followed - how fantastic not to have to use floppy disks any more on the Amiga 1000! 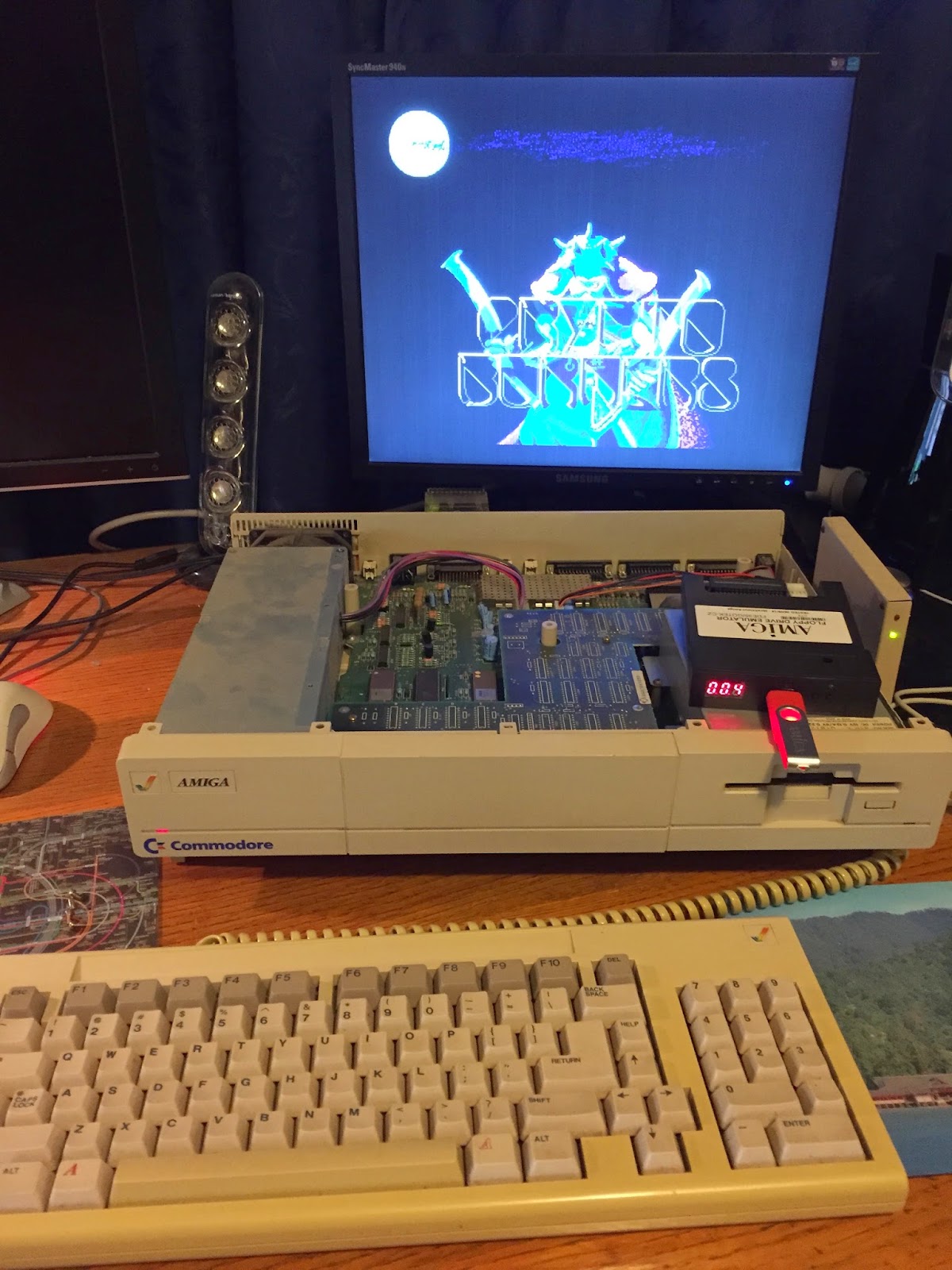 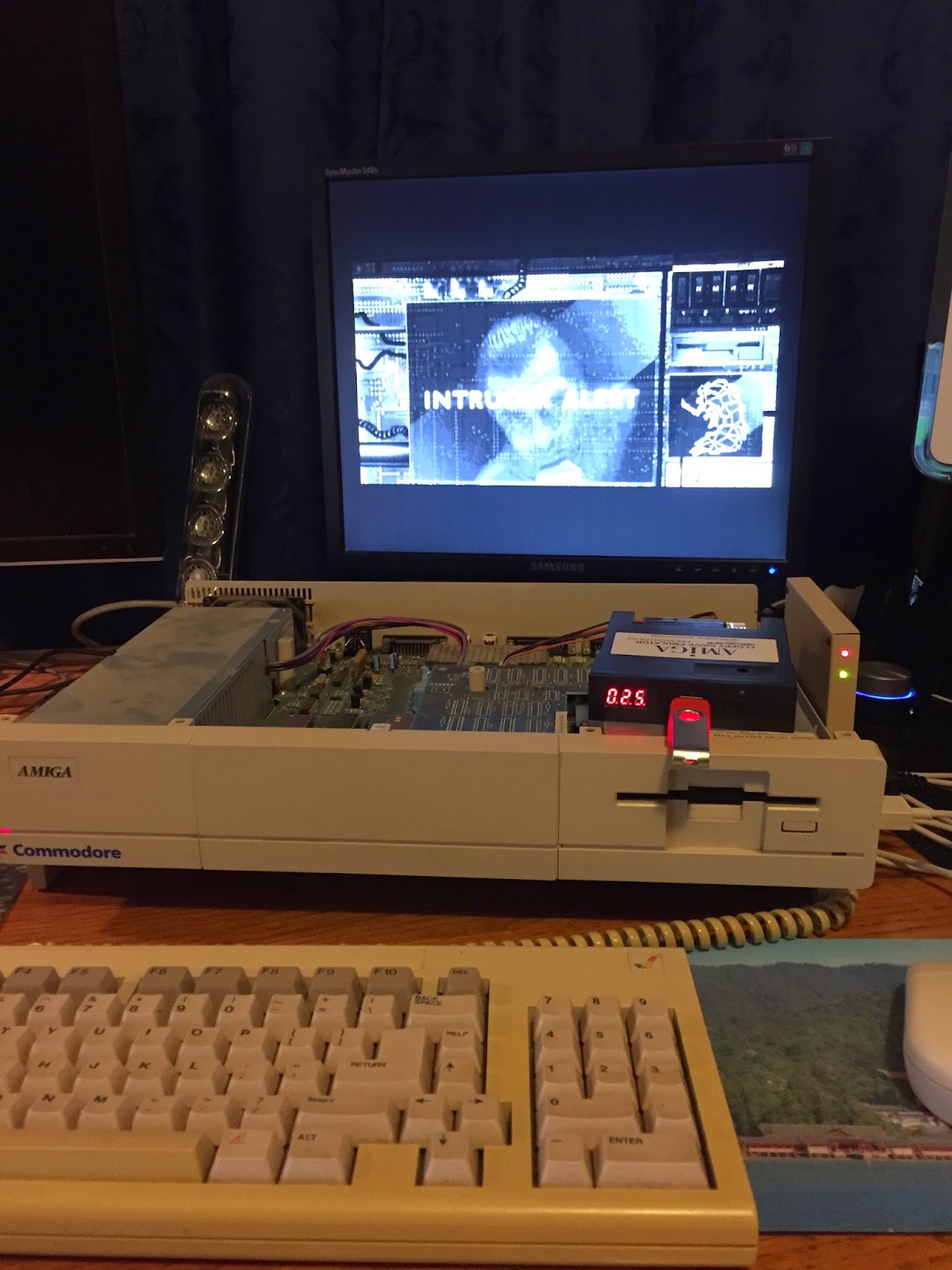 Having established the Gotek works great on the Amiga 1000, I next needed to work out a way to keep it connected and still have the option to go back to the original floppy drive if I ever want to.

I found a longer Amiga floppy drive cable I had spare and ran it from the internal Amiga 1000 floppy drive connector outside through the right hand expansion port. I then used an external molex power source (used for powering IDE/SATA hard disks for USB connection) and used a molex to floppy drive power connector splitter.

This means the internal floppy drive is no longer functional - but I can always reconnect it again if need be.

This external setup is not perfect I know, but does allow me to put the case back on the Amiga 1000 and keep things reasonably tidy - I have no intention of hacking up the case to make it fit inside: 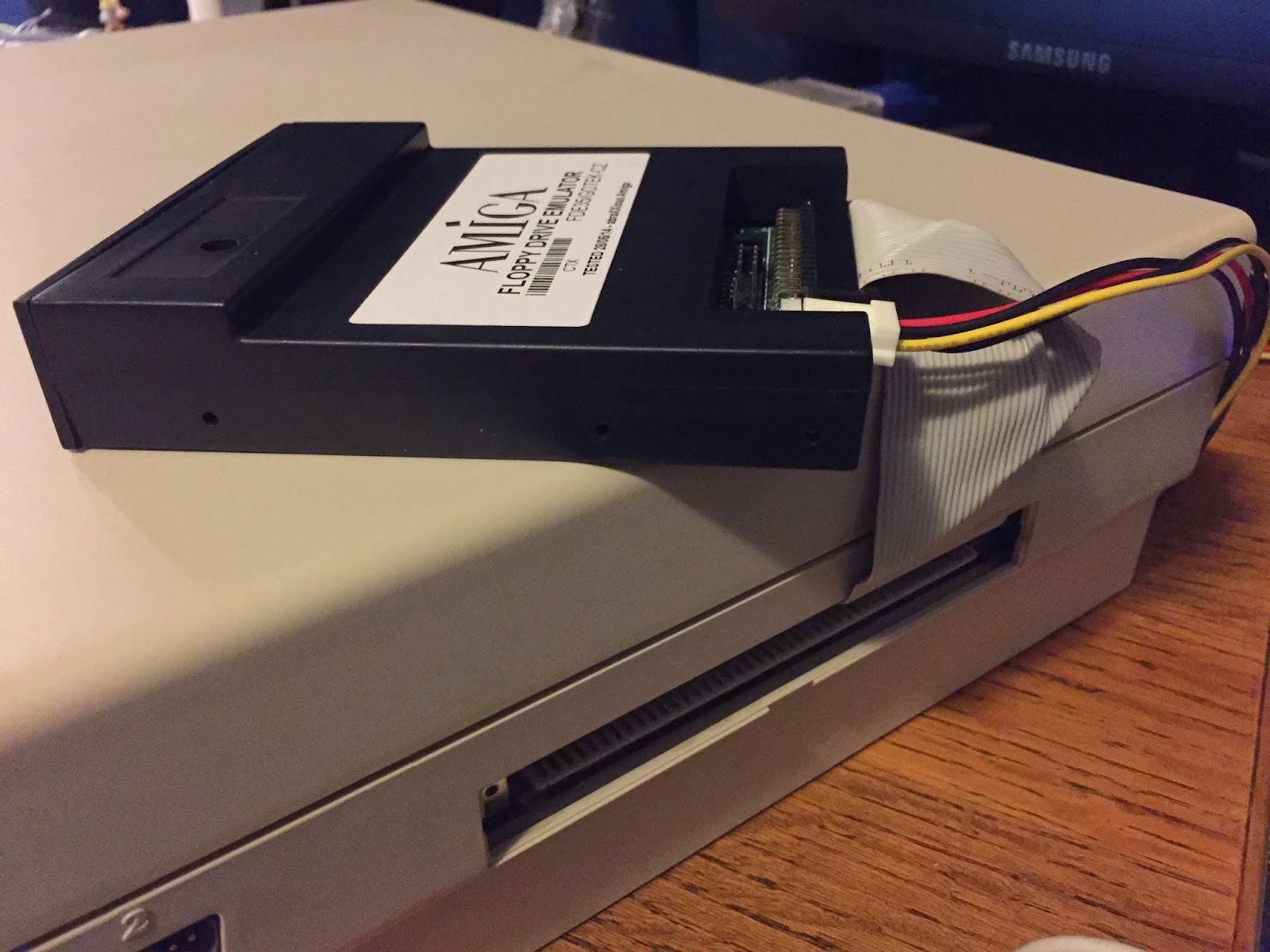 After I put my 512k expansion card back into the right hand side expansion bay, I found it performs a useful role of keeping the Gotek in position on top of the Amiga 1000, and also stops it moving around when using the buttons on the front of it: 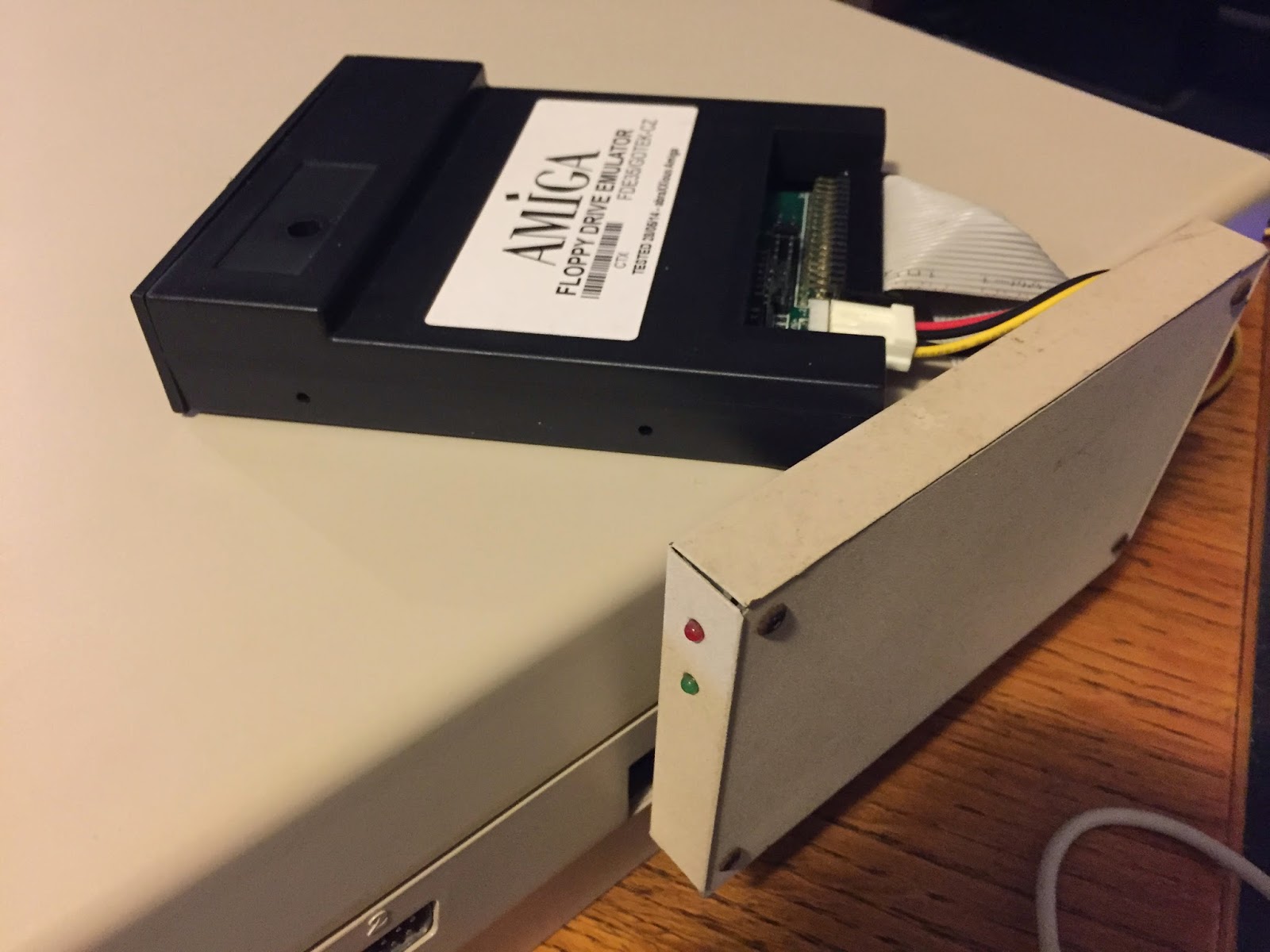 And here is the Amiga 1000 all reassembled again, with the Gotek running and having just booted the Kickstart 1.3 ADF again: 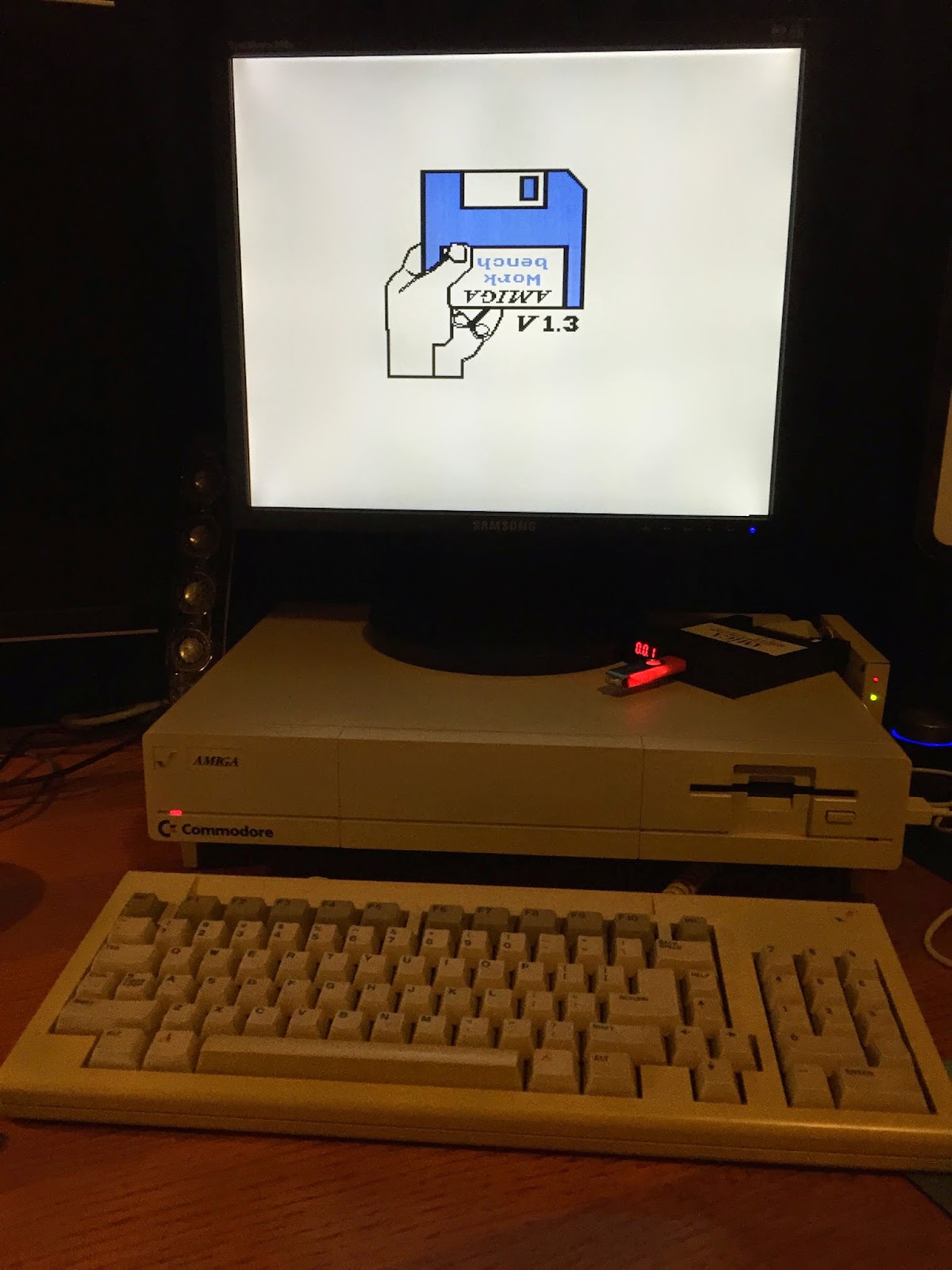 I think this is a great addition to the Amiga 1000 and it will stay in place from now on: 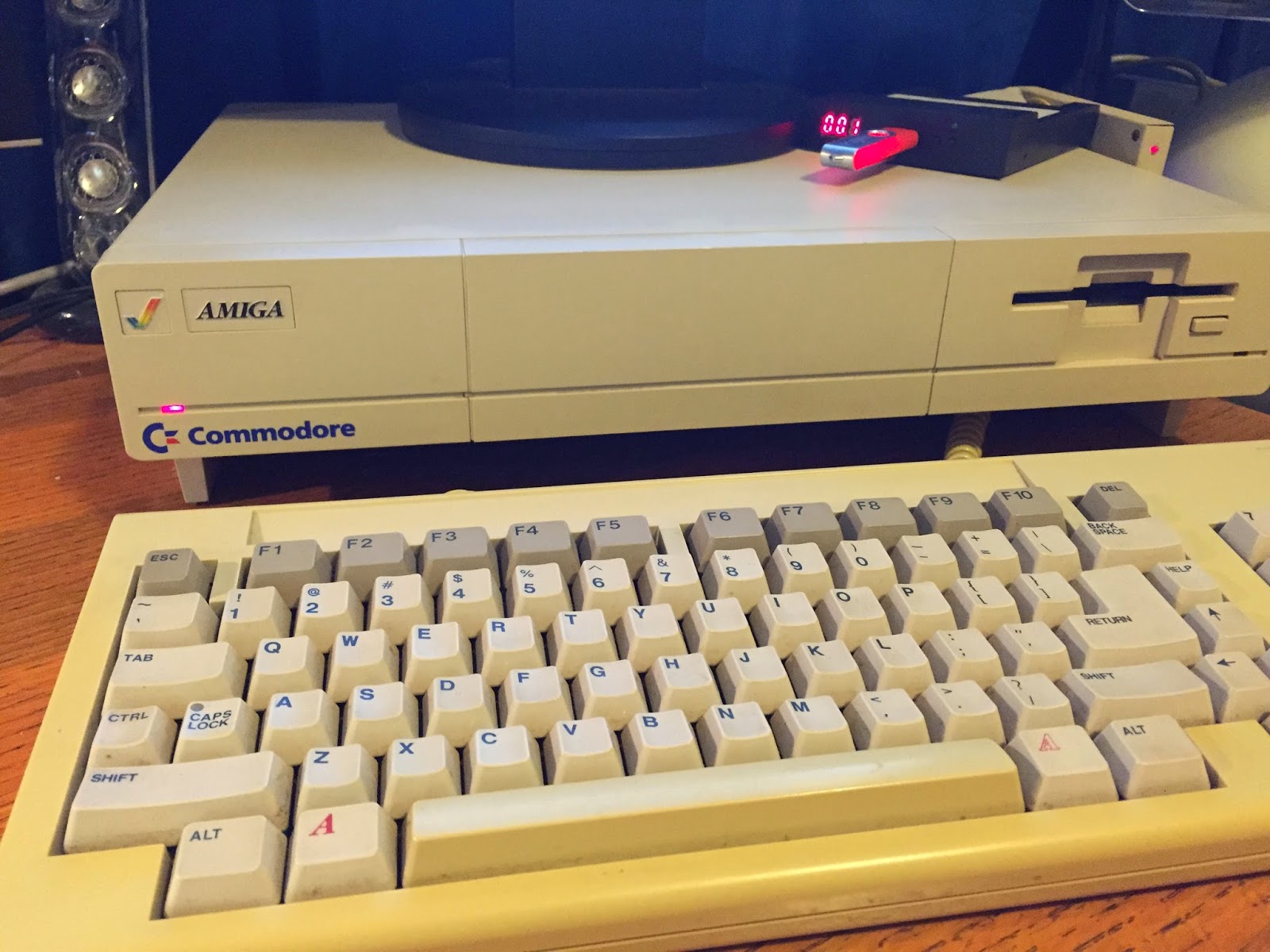 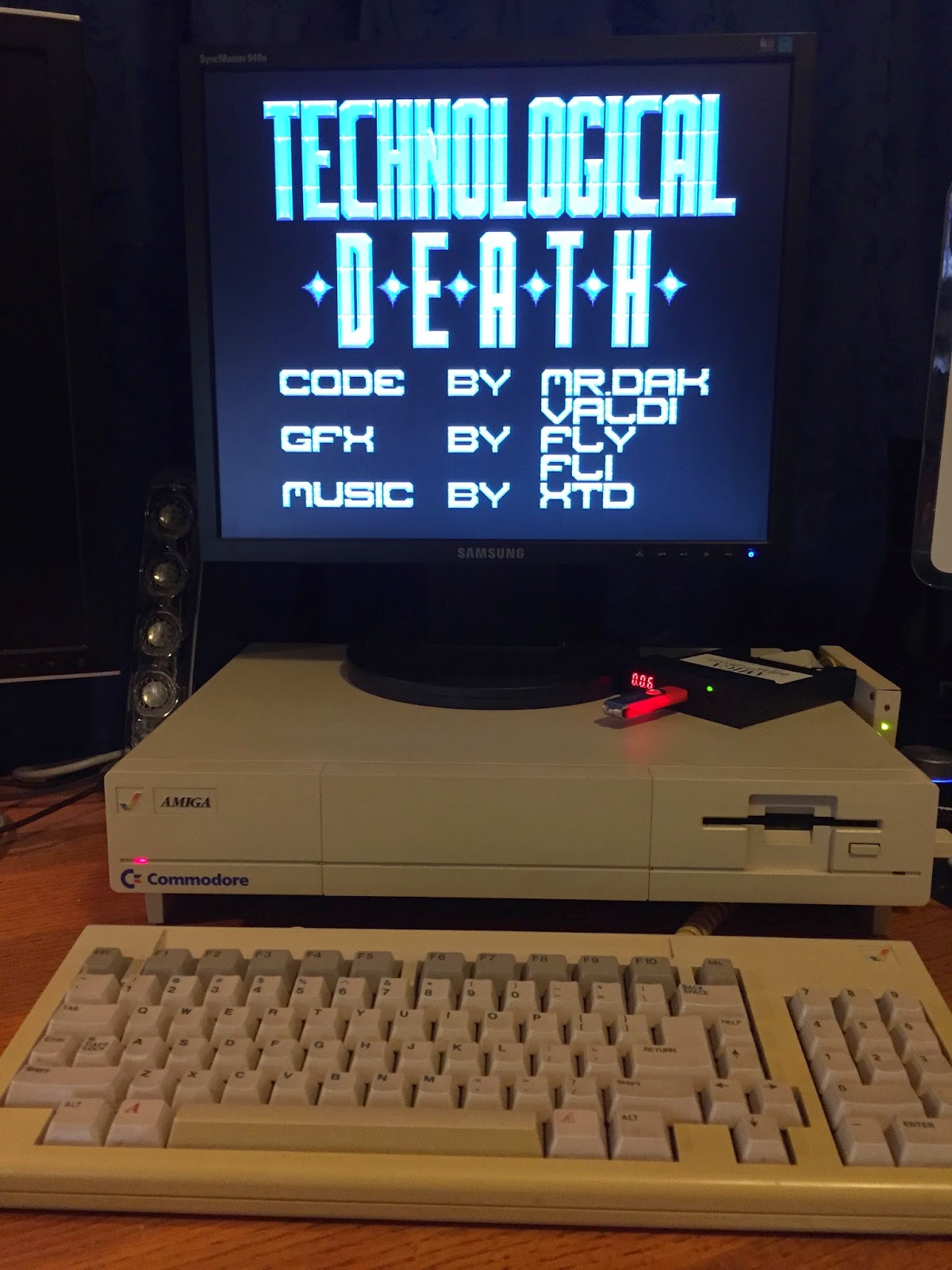 I also tested some games by changing the Slot to 000 to use the selector.df to assign some of the many games I have on the USB stick to various slots on the Gotek: 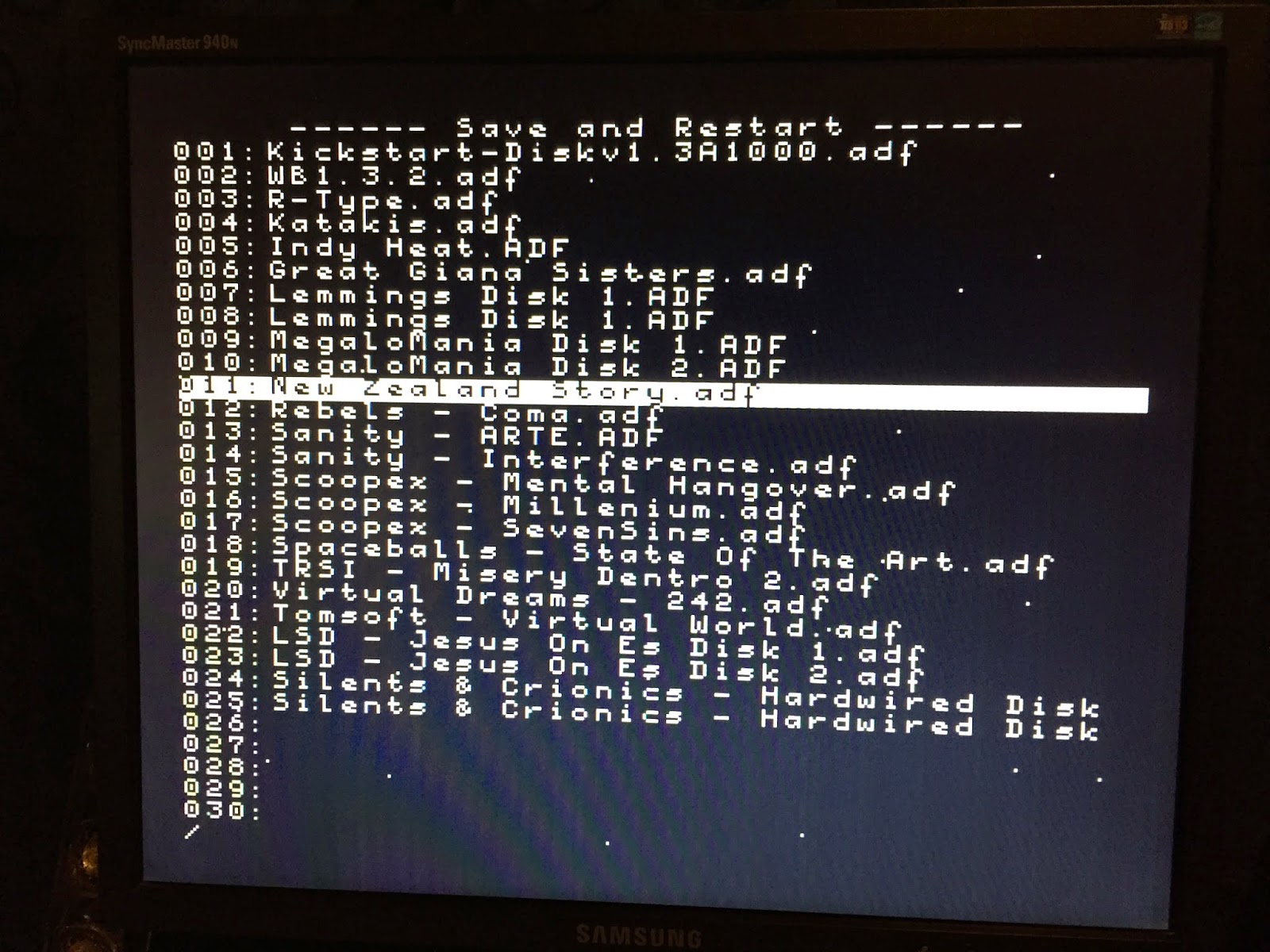 I then reboot and select the Slot I want using the buttons on the front of the Gotek - here is R-Type booted up from the Gotek: 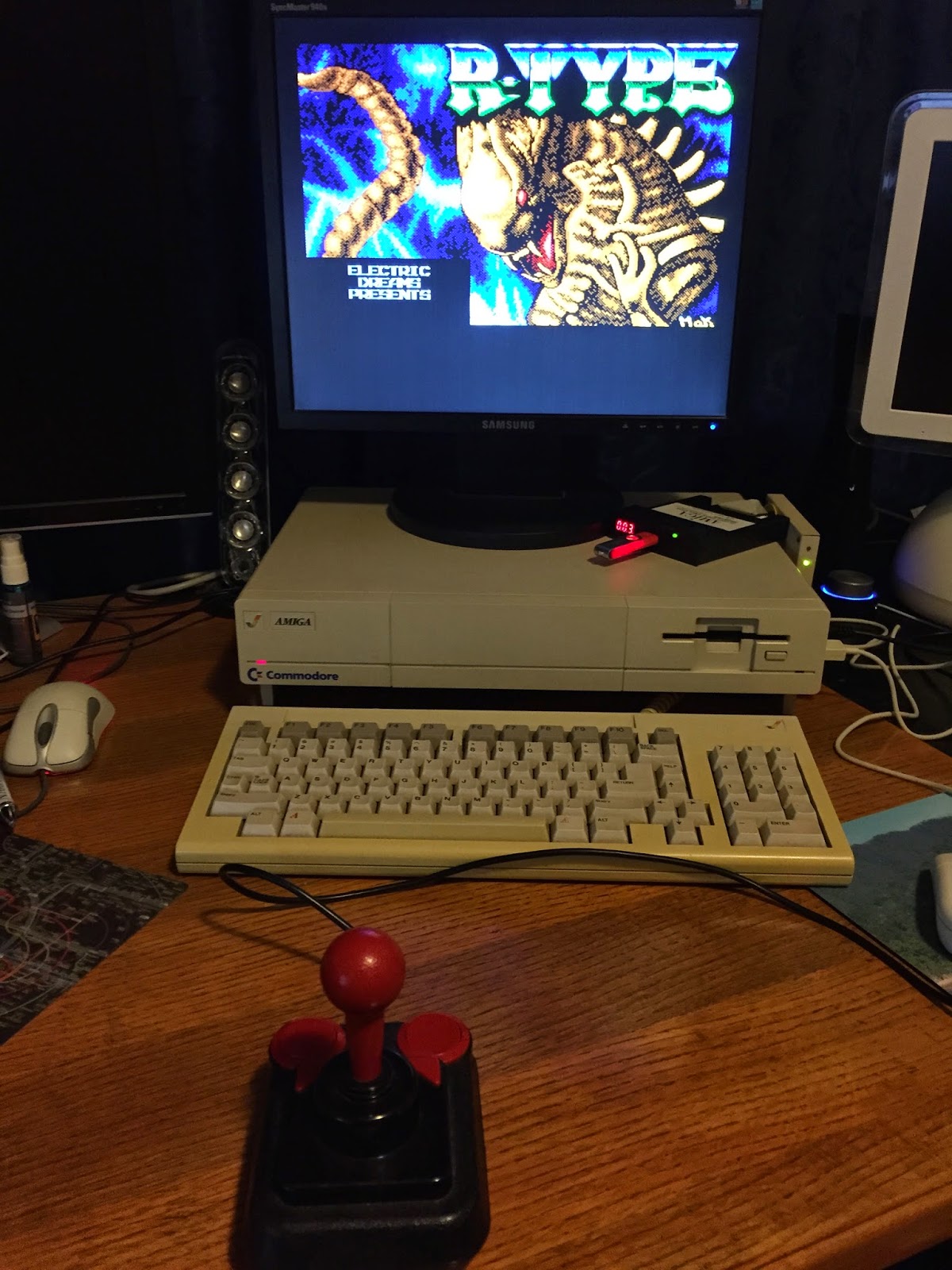 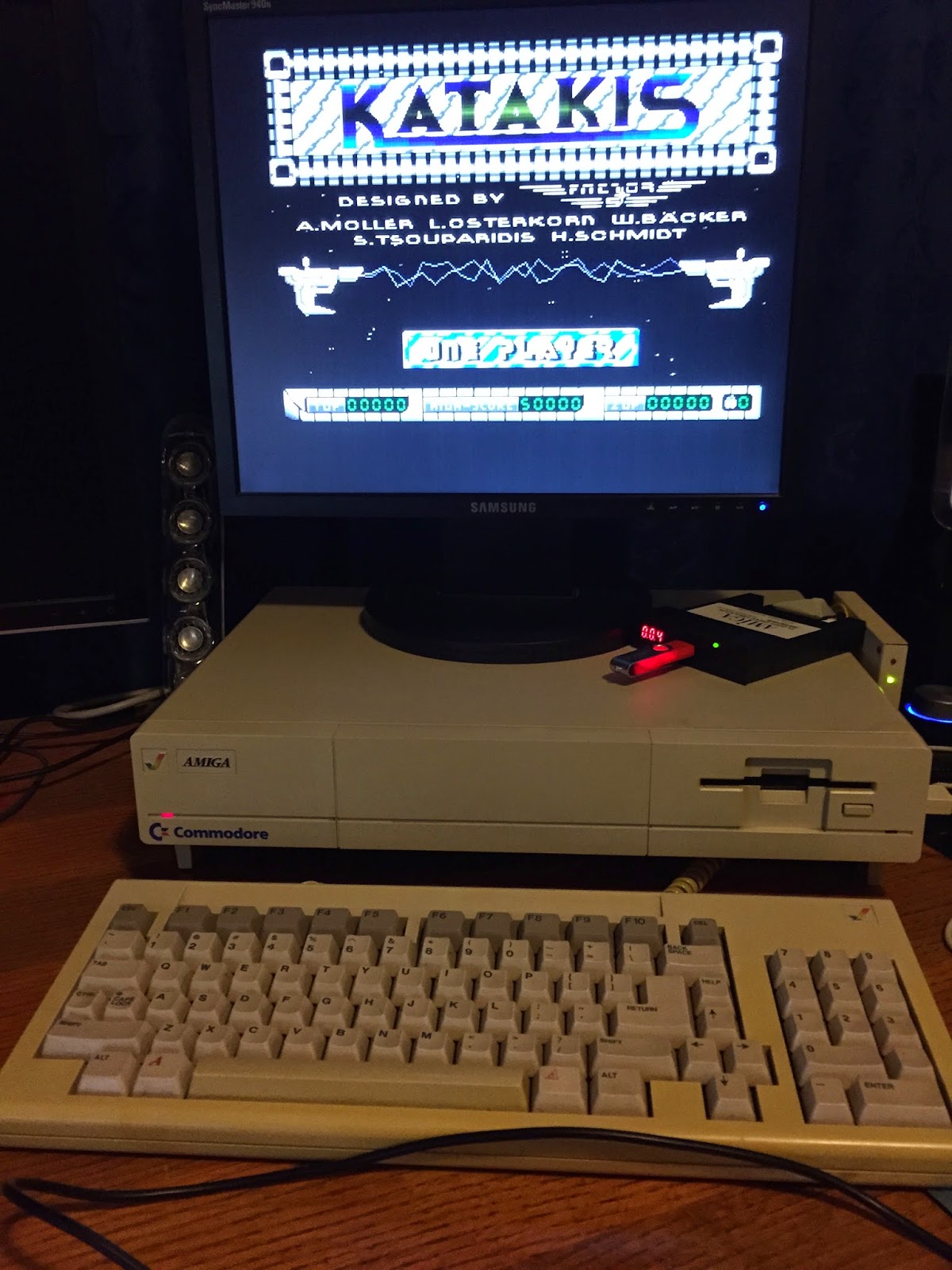 Having the Gotek on the Amiga 1000 makes great sense!

After trying it on the Amiga 600 last year I couldn't see a use for it given I had a hard disk and accelerators, etc. On the Amiga 1000 it fits well, and works great! Recommended!