New workspace and Ascii the Cat

It has been a busy couple of weeks. First I have been working hard to make my new Mac Mini the way I want it by cleaning it up extensively after restoring my backup. But now it’s pretty much done. 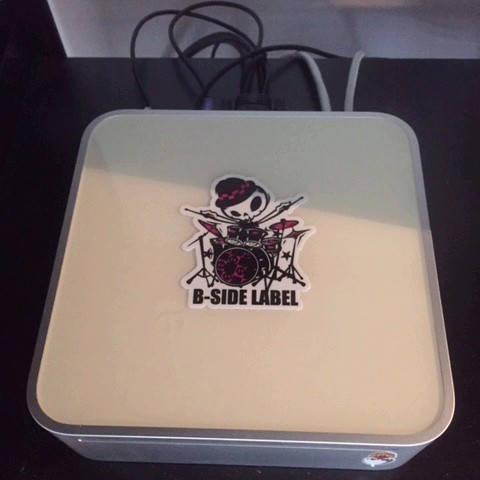 I of course wanted to get rid of the Apple logo so I used a sticker I bought a while ago in Japan. I think it fits rather nicely. 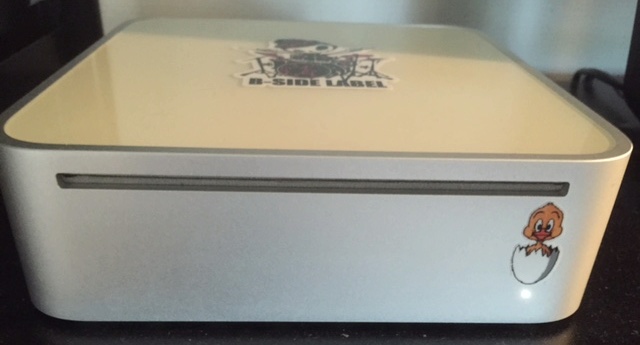 I also had another sticker I made several years ago, taken from the famous Budbrain Megademo. I think it also hit the spot :) Now this machine isn’t a mere Apple computer but a true Amiga. Right? :P

Also, since I’m a known sucker for merchandise I decided I needed a MorphOS T-shirt. Since there are no official MorphOS useless crap-stores I went to zazzle.se and had one made from an existing design. 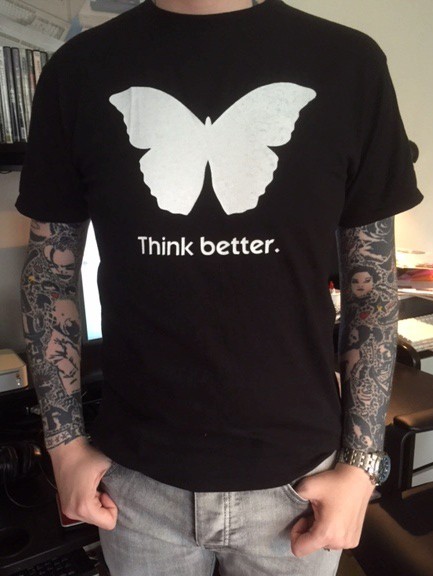 I wear it with pride :) The only thing I didn’t like is that it’s was made with screen printing which doesn’t last as long. But the pricing is not bad I think, and the company is international so anyone can make their own if they like/are as stupid as I (just switch the .se to .com).

I don’t use my Powerbook as a dedicated IRC computer anymore. I tried to make it my new main computer, but because of it’s extremely weak USB ports it was out of the question. And after deassambling it and putting my new Mac Mini in place I just thought I only need one MorphOS machine running. 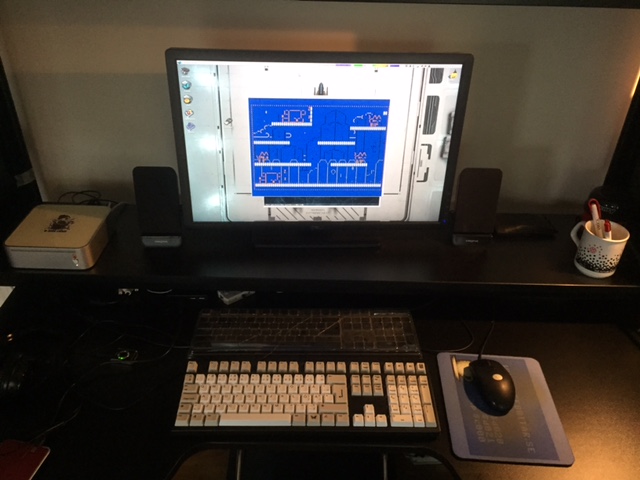 Sorry about the dark picture.

I do have to say I’ve really fallen for this machine. Like I wrote in a previous blog post this little thing makes a lot of sense using as a MorphOS machine since a G5 has so much wasted potential (due to Amiga API restrictions). But the things I really like the most is the size of the Mac Mini. The Powermac G5 weigh a ton, so it was a nightmare bringing not one but two (!) of them to the local Amiga club to see if they could be saved.

As it turned out they both could. It turnes out that my 2.7 GHz had a broken SDRAM that caused the problems. And the other one (2.3 GHz) had two faulty, cheap SDRAM knock offs. Sadly, I’ve rendered them both useless as MorphOS machines by switching licenses from one G5 to the next and then to my Mac Mini. MorphOS Team only allows it if a machine is broken. I guess I could beg them to nullify that by buying a new licence but like I said, I’m happy with my Mac Mini and I don’t need more desktop computers. Now I just need to figure out what to do with them.

Well, this is one reason for being busy. The other reason is actually even more fun! There is a demo party in Stockholm called Edison I have been visiting these last three years. This year I managed to convince my internet buddy Daniel Müssener (the main programmer at Cherry Darling) to come and participate. I was also able to get my friend and subway driver colleague Tomas Nordström to attend too. Tomas is also a musician who among others use an Amiga 1200. This gave me an idea that we should do something small for this party. Nothing fancy, just something small that would be fun to make and show. The only thing we lacked was a graphician. I have done some basic ascii art in my past so we decided to go for that. Now everyone had a role to play.

But along the way our initial plan to make a simple ascii based intro into an ascii based platform game instead. I had this idea for a cat and dog based puzzle platformer. You play as a kitten that needs to steal food to survive until your out of town master returns, who has accidentaly locked you out. Other cats will make it difficult as they make you fall down. And then we have dogs that are instant death. Interesting enough, almost nothing was changed of that first idea and pretty soon we had together made a complete game (with only two levels so far though).

We named it Ascii the Cat. 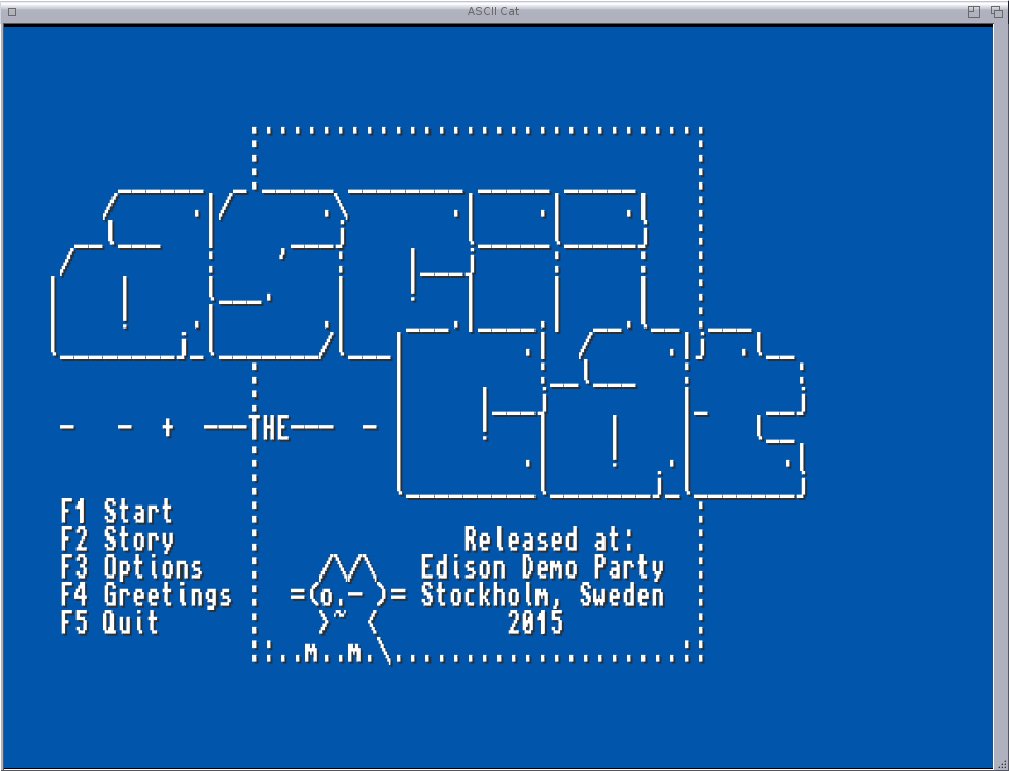 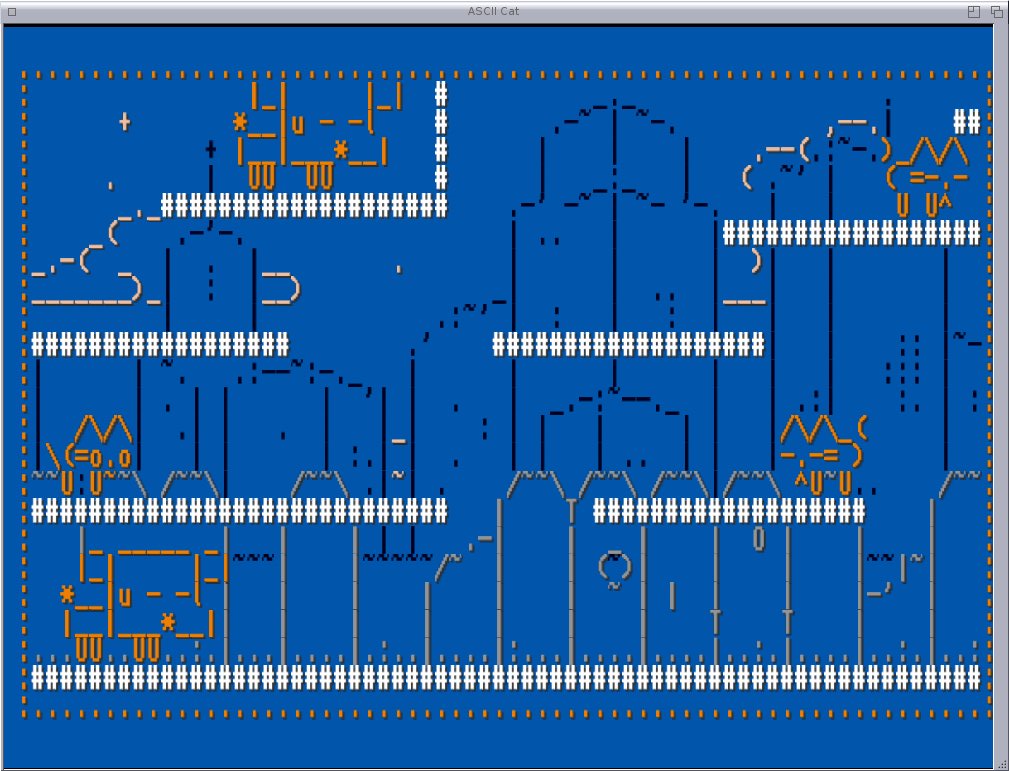 We released it at the party for the Wild/Animation compo. And we won! :D

Our plans now is to polish the music and code plus add more levels to play. The idea is also that the game will be hight costomizable, and also very easy to make your own levels for. When it’s finished it will be released as Public Domain (for free) but only for MorphOS, AmigaOS 4 and AROS. We want to try to make this a community driven game, where anyone can upload new stuff. So a homepage is planned for that end. As of now there is no release date, but since most things are already done it will probably not take that many weeks or months.

This is what I’ve been up to. Besides family life of course. Let’s see if I can’t write some tips or reviews soon enough too.