A couple of months ago I purchased a 1 TB 2.5″ external USB HDD in order to sort all of my stuff from my various computers into one single, well organised place. The idea is that every computer will eventually have the exact same system. So when I add new stuff (pictures, videos, backups etc) all I need to do is dragging the folder to the HDD and it will add the new stuff.

I stop here to add something which might be of interest to you. Since MorphOS doesn’t handle NTFS 100% (the default Windows HDD file system) I chose to repartition the HDD to FAT32 instead. FAT32 is pretty much supported by everything. It handles up to 4 TB partitions, though it can’t handle files bigger than 4 GB. Unless you work with heavy video editing this won’t be much of a problem. I do have a couple of movies that are bigger than that, but I can’t play them in MorphOS anyway (too CPU heavy) so I will save them somewhere else.

However, Windows 7 doesn’t format FAT32 for some petty reason. So I had to find a third party program, preferbly gratis, somewhere else. After some trial and error I found EasyUS Partition Master Free that does this. It was also a very helpful tool in enlarging one partition and merging two in Windows, since Windows own tools refused to do that.

Organizing my videos, programs and pictures was pretty easy. What ended up taking the better part of two weeks (!) was all the MP3:s I had all over the place.

I got my first Windows PC back in 2000, after selling my last Amiga. Up until then I hadn’t care much for MP3:s, but now I started to collect them like crazy. Since I never runned out of space the number of songs just kept piling up. I also got my first MP3-player at the time, but it could only handle 32 MB so it was pretty easy to keep track on what songs to add.

Then in 2004 I finally got a MP3-player with 1 GB storage (I still have it, but I have lost the cables and software). This was a huge improvement but it also force me to face a challange: I had some 6 GB of music. Only 1/6th of that could be stored in the player. I solved this by creating a separate MP3-player drawer with 1 GB music, for easy transfer and organizing. The result was that I for ten or so years kept adding and deleting songs in that drawer. Eventually, I had deleted a lot of songs I liked and added songs I grew tired with. So I started over again with a new drawer, adding old and new songs but still had to prioritize due to limited space. It’s not until now I have a MP3 player large enough to include every MP3 I got. So when I decided to merge all these different drawers into one organized system it meant I had to go through tens of tousands of songs in order to delete duplicates, poor versions of songs I like and songs I just had for some reason but don’t listen to.

A tedious job to say the least!

But I soon found out that it was a pretty easy to do in MorphOS: 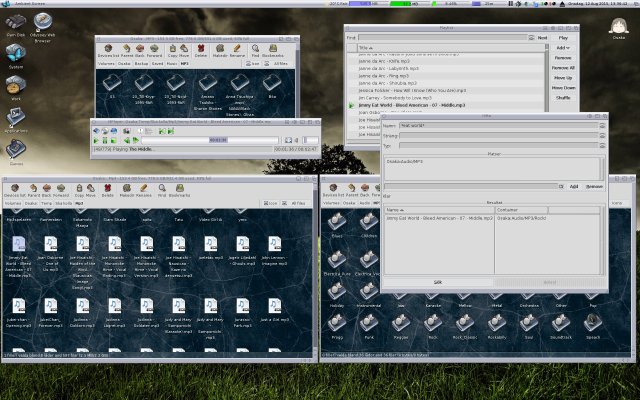 As you can see I have three drawers. The top one is for songs and albums I don’t listen too but decided to keep anyway. The one to the bottom left is one of my old MP3 drawers and the one to the bottom right is the new organizing system, on my external HDD (top right. I named it Osaka. If you like anime, you know what it means :) ). I also started MPlayer and added the drawer(s) that I was currently checking in order to more easily listenand switch between songs. I also used the very handy search function in MorphOS (which is a button above the folders). This helped me make sure I had already copied the songs to it’s final destination, or confirmed if the song in question is the same as the saved one.

Unlike Windows, you have to write “*” before and after the file name if you want it to look for any file with the written words in it. Without the “*”, it will search for that exact file and that exact file only. So unless you have a file called “eat world” (as in our example in the picture above) it won’t find it. Also, if you use “*” only in the beginning of the word it will look for any file that ends with “eat world”, and if you use “*” in the end it will look for file names that begins with “eat world”. This allows for a flexibility that doesn’t exist in Windows, even though I usually end up using “*” at the beginning and at the end anyway.

I also have OWB iconized for quick access when I’m unsure where to put a song or a band. I’m no musician so for me a lot of genres sounds the same, or almost the same to me. In the end, I even had to invent some genres. I can’t tell the difference between house and trance for example so I made three genres besides computer music, electric rock and goa: electronica vocal (where people sing), electronica non vocal (where people say maybe one word or one sentence) and electronica pure (no speach whatsoever). It turned out to be a good choice (at least for me) since these three kinds of genres are easily distinguable. After much work, this is how it turned out:

I also created sub catalogues for languages, albums and sometimes sub categories (like audio books, lectures and so on in Speach).

After working like this day in and day out it felt good that MorphOS was as good as it was for this task. I do think Windows could do it pretty much as easily, but Windows is, unlike MorphOS, a very sluggish, non responsive and slow system. It felt much better to start MorphOS and be ready to work in about a minute, unlike Windows 10 or so (remember, just because Windows have started it doesn’t mean that all the background programs have finished loading, which really adds to it’s sluggish response time).

The only real disadvantage was that sometime MorphOS freezes when transfering a lot of files, or a few really big files. It happens at random (sometimes not at all) so I pretty much had to copy individual folders just to be on the safe side. When copying freezes the file will be corrupt and you have to redo the copying process. If you don’t really know which file has been damaged, the only thing left is to start over in order to be sure no files are corrupt. But if you copy one folder at the time you will at least don’t have to copy too much of the same files. Since MorphOS reboots quickly you will be at it again within a minute.

This sounds annoying, and it was at the beginning, but after I started copying individual folders I quickly got used to it, and the freezing became much less frequent as well.

One advantage on the other hand was that when I tried copying in Windows instead it had a lot of problems. Several files had characters it didn’t like and simply refused to copy it. Other files was buried within a large number of subfolders with long folder names and Windows refused to copy those too. Where Windows just refuse to do anything, MorphOS copies correctly without a fuzz.

Also, I have several files that have Japanese names in it. MorphOS can’t read Japanese so it shows as complete jibberish. However, when I copied the distorted file names in MorphOS and then checked them out in Windows the file names was shown correctly. This was an unexpected and welcomed surprise indeed. I expected the file names to be corrupted in the process, but there was no such thing.

To summarize: while MorphOS has problems with occational freezes and not being able to read Japanese file names, Windows is sluggish to boot up and it have it’s own problems which results in files not being copied at all. In the end, I prefered using MorphOS instead for this huge task. This shows that even with tousands of full time paid developers you might actually do something less well than a handful of hobby programmers working out of love.