I have been away for over a month meeting my inlaws in Japan. Even though I did bring my Powerbook with me I ended up having very little time playing with MorphOS. But I did get the opportunity to visit a Commodore Fan Club meeting in Okubo (Tokyo) the 20th of September. If you read my old blog post about Japan you know Amiga was never big there, but apparently it had more love than I originally thought. Big enough for a meeting.

The meeting was inside this building (Kantou IT Software Kenpo Kaikan, 関東ITソフトウェア健保会館): 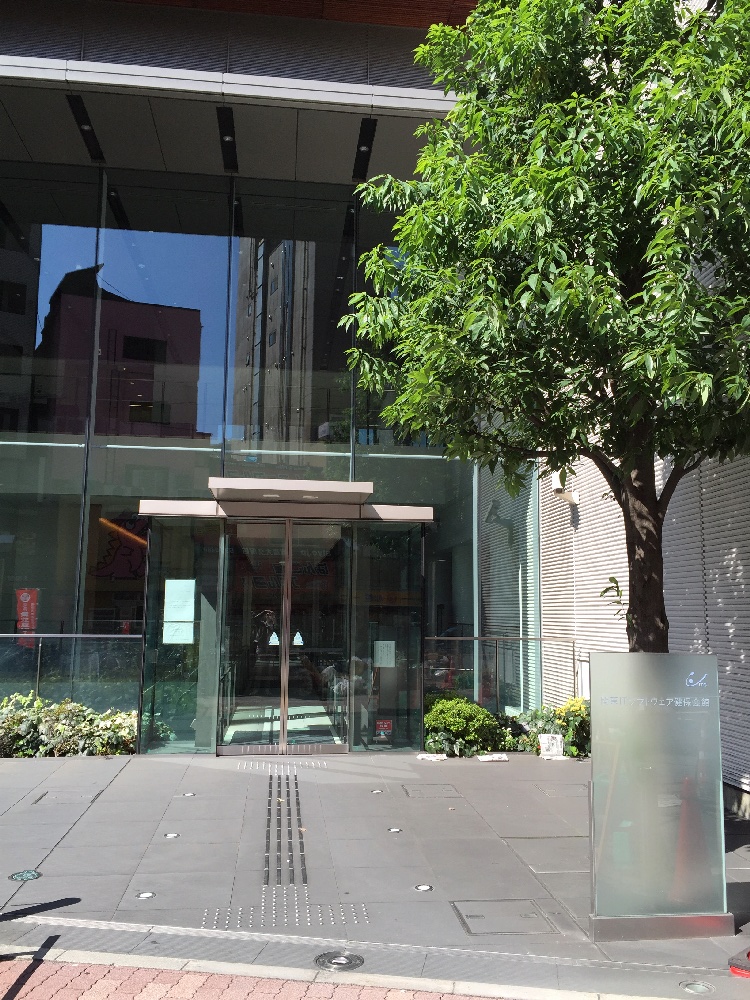 Beyond the glas door I was greated by this: 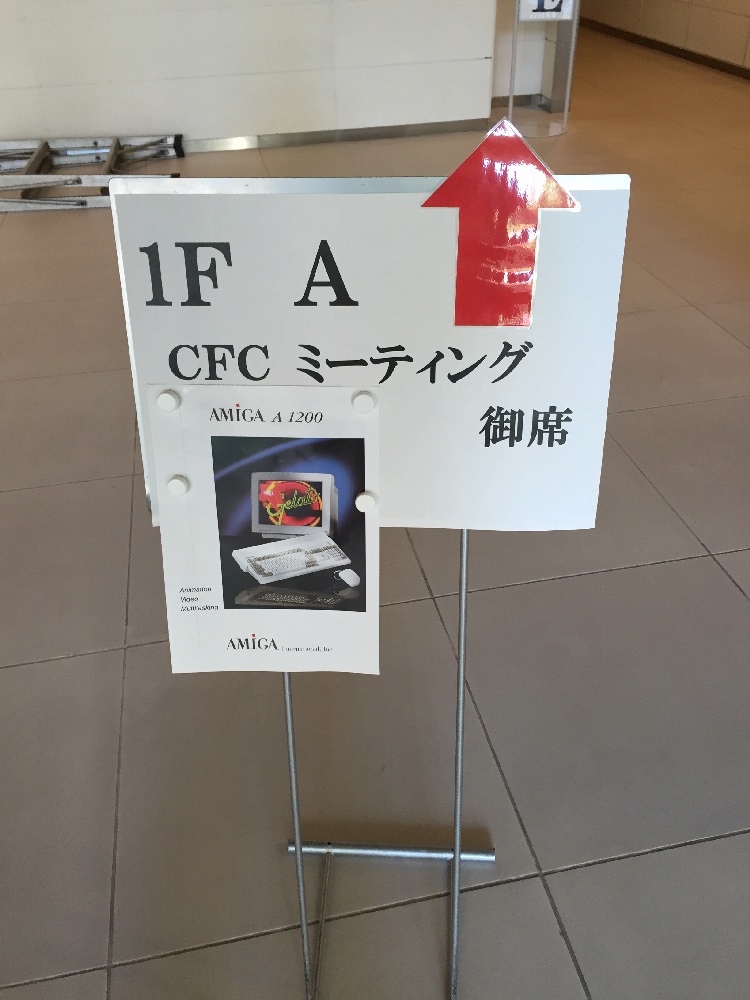 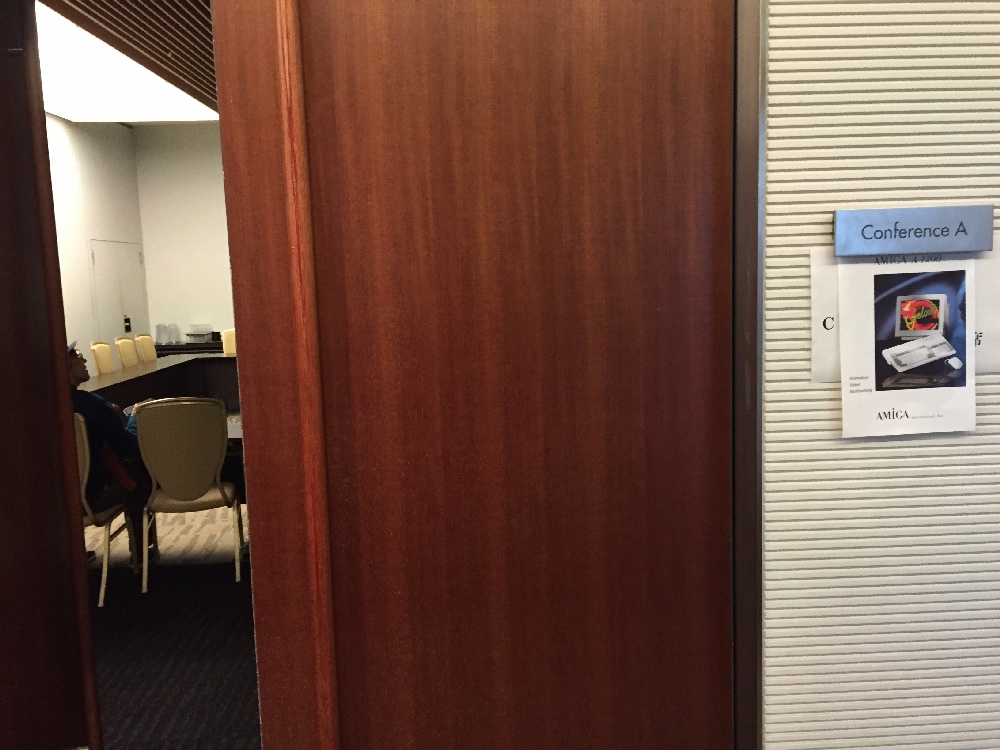 Inside was a couple of Japanese people, plus one Italian living in Japan showing off his A1200:

While me and the Italian chatted about things Amiga the other Japanese where chatting with each other:

It turns out that most of them are ex Commodore employees. High up ones even. And they had even met Jay Miner in the States before he died in 1994. Naturally they are still die hard Commodore fans.

The meeting started, and everyones attention turned to the A1200 which started to show off some games and demos running via WHDLoad:

After that I got a chance to show off my Powerbook running MorphOS (sorry, no pictures). For the Japanese this was the first time they saw it running on real hardware and they where really impressed. They seemed most impressed by the fact that it runned natively (not in emulation) and that it could execute 68k based programs. They all said they would get their own PPC Macs to run MorphOS on it. I hope they will.

After that we was shown a program that was meant to enable Amigas to run Japanese native texts (hiragana, katakana and kanji). They run it in emulation on a laptop but couldn’t get pass the installation. It broke down somewhere. But we still got a laugh as the installation program played an upbeat song when started, something I’ve never seen (heard) being done before with an Amiga program: 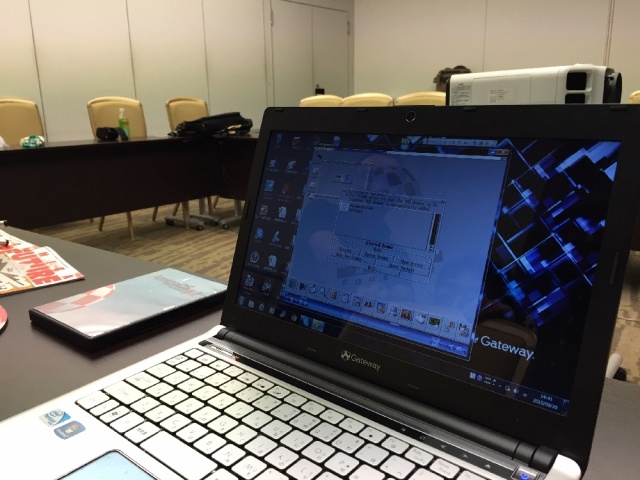 After that we got an demonstration of the C64 Direct to TV. A fun gimmic but the included games where mostly crap: 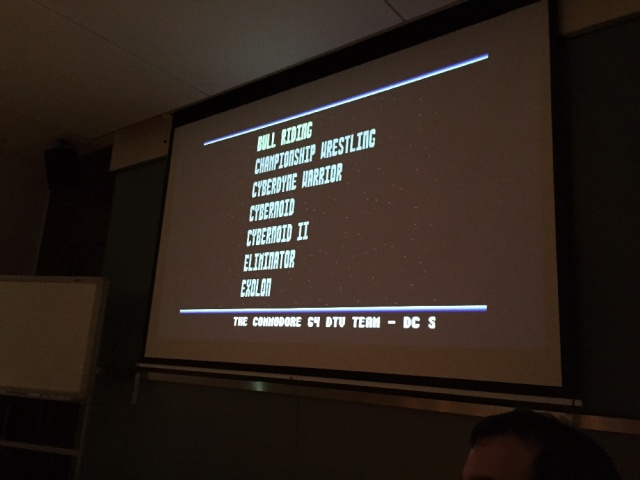 It was a nice meeting indeed which lasted for about an hour. After that we went to a local Chinese restaurant and kept talking about Amiga, computers and everyday life stuff. It was nice meeting the guys and getting some more knowledge about how Commodore was in Japan:

A couple of days after getting back from Japan it was time to go abroad again. This time to Germany to attend the Amiga30 event in Neuss. I was going there as an exhibitor, showing off our magazine Amiga Forum:

As you can see I also brought my Mac Mini with me, showing off some MorphOS demos. Even though my table recieved very little attention and interest it didn’t matter. I was away looking at the other tables and talking to people as much as I could anyway. It was a pretty big event, and this was the view from my table:

As you can see there was a couple of nice A4000T and A1200T (right) and to the left was the cancelled Walker prototype. This was Petro Tyschtschenkos table and he was busy writing autographs and chatting with people. He is after all part of the Amiga fame. R.J. Mical and Dave Haynie was also there but I never got a chance to even say hello to them. Here is the Walker:

While a lot of people call the Walker a design disaster, I’ve always liked it. With the right specs (it’s specs weren’t good sadly), advertisement and timing it could have predated the much praised iMac. Of course it didn’t happen as Escom went bankrupt before that. There was also a glass framed piece of the first A1200 motherboard that came out of Escom. It was broken from the start, but it was still the first Amiga made after Commodore went bust: 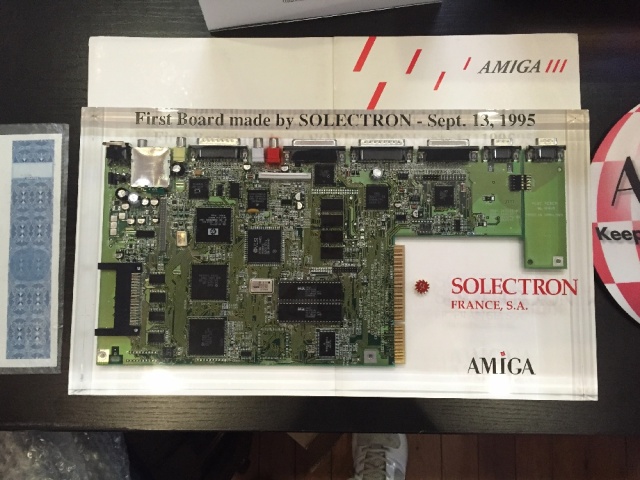 Right next to me sat Daniel Müßener of Cherry Darling/Golden Code. He was showing off his numerous games but also a small demo for an upcoming port of Wings Remastered. As you might know, Wings RM was a Kickstarter game that was bringing the classic Amiga game up to modern standards. After several tries they managed to get it funded and one reached stretch goal was NG Amiga ports (by third party). However, since Wings RM was based on Unity such a port would be pretty much impossible.

This prompted Daniel to make his own Wings clone called Wings Battlefield just to show them. After some time Danile was contacted by the developer who asked him to make the port. Though he can reuse some of his own code for the game the 3D engine has to be for the most part a complete rewrite. Talk about ambitious!

Here is his table (games being played is Battle Squadron and Wings Battlefield):

AmiKit was also there demonstrating their Amiga emulator AmiKit 10 (this one showing AmigaOS 4.1 FE Classic): 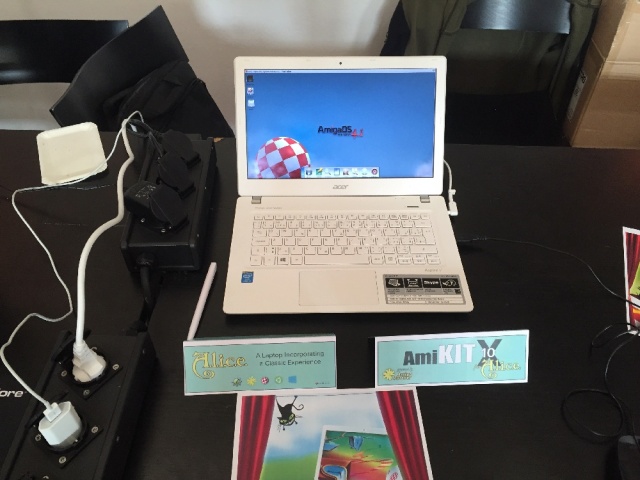 You could also buy music CD:s based on Amiga classics: 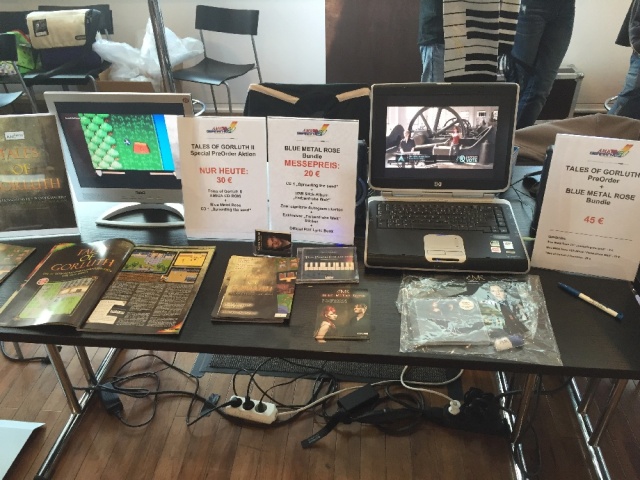 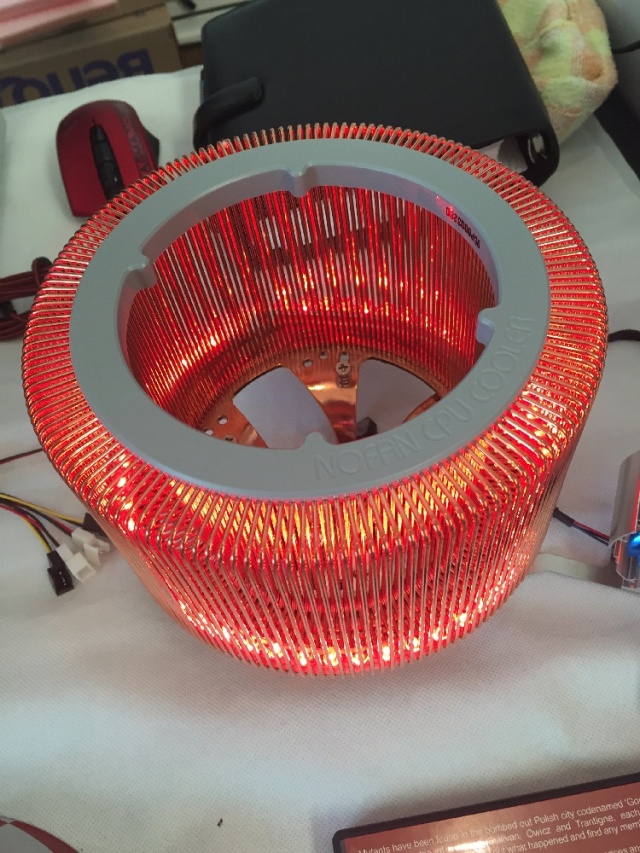 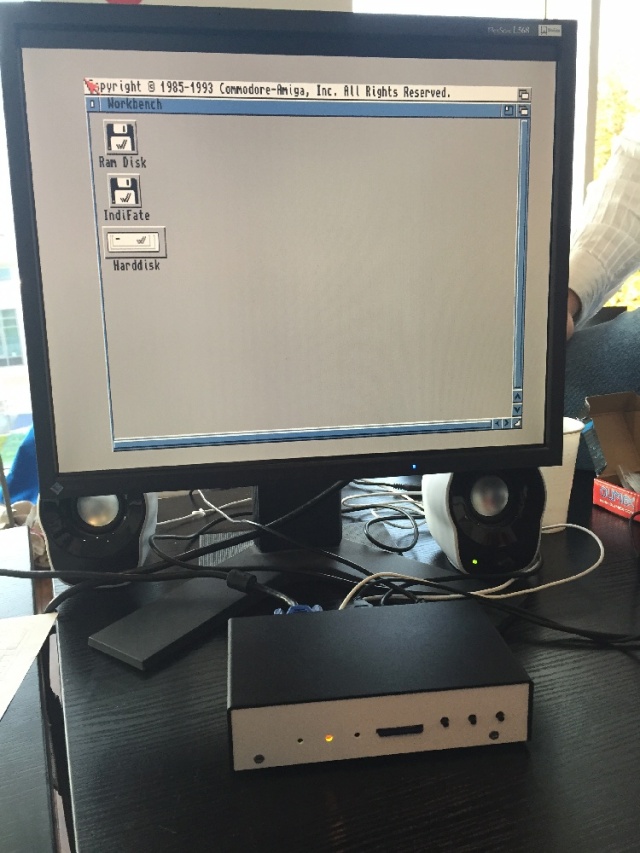 … or a bunch of old Phase5 prototype motherboards: 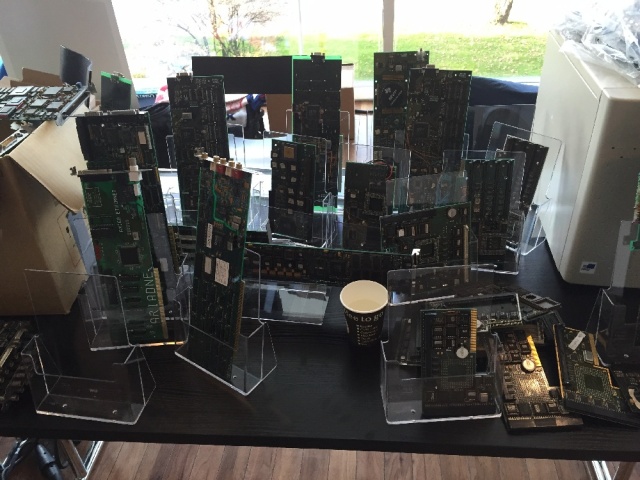 Because I was an exhibitor I didn’t have enough time to look and ask around every table. And when I had time, there was usually already a lot of people there talking to the people in charge, not giving me much change to talk to them myself. The fair was pretty packed:

The highlight of the event has to have been the upcoming X5000 computer. Sadly, A-Eon didn’t let the viewers try AmigaOS 4 on it but instead showed off some demos and movies running simultaneously: 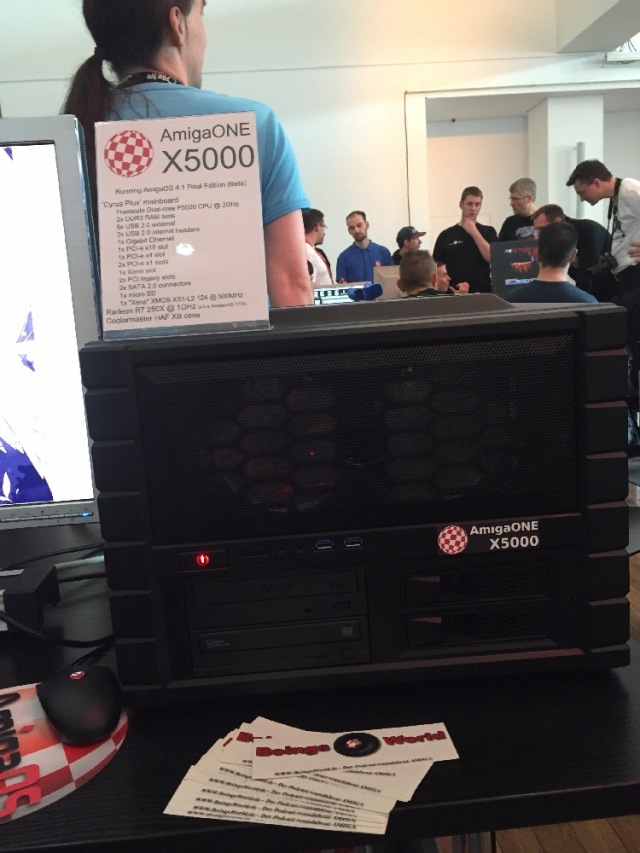 ACube also showed off their new motherboard, codename Tabor. I didn’t get a chance to see it myself though.

In the afternoon, when things was a little less hectic I got a visit from Mark “bigfoot” Olsen, one of the core MorphOS developers (and a terribly nice guy) and we ended up having a long conversation about MorphOS, problems, future plans and whatnot:

The MorphOS table showed off some computers running MorphOS. Here is a maxed out Powerbook 1.67 Ghz and a classic Amiga 4000 running MorphOS 3.8. The last supported MorphOS for classic Amigas is 1.4.5, but the Team has been able to get the latest version to work too. But according to them it’s not a painless process to get it to work which is why it’s not released to the public. To the far right is an iBook: 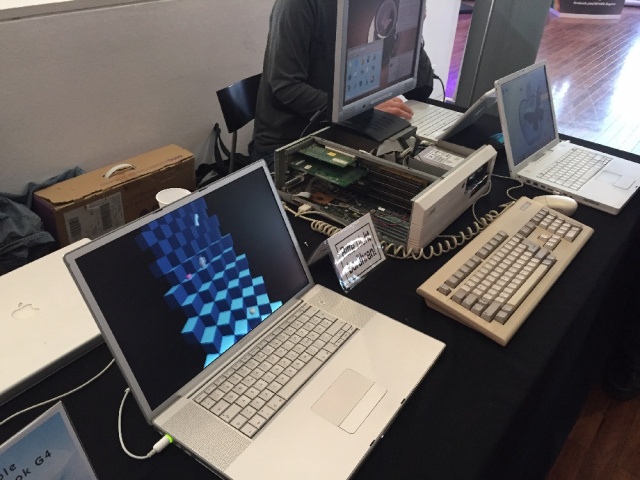 There was also an ACube SAM 460 running MorphOS on it. The SAM 460 is the first currently selling motherboard that is supported by MorphOS (since version 3.8) in almost a decade:

MorphOS is also working on a port to the above mentioned X5000, which people where allowed to try out:

I also got a chance of course to talk to the other members of MorphOS Team and it was such a nice thing to be able to meet them face to face. In fact, this was the highlight for me since there was so much to talk about. They also showed off a working copy of an upcoming MorphOS port of Pagestream, MIDI support and of course MorphOS 3.10 beta. Plus a bunch of other software in the works.

I wish I had taken notes and more pictures, but there was simple too much to see, do and people to talk to. I had a great time and it was nice to see that MorphOS and the Team are doing such a great job. I hope I will have a chance to do something like this again.