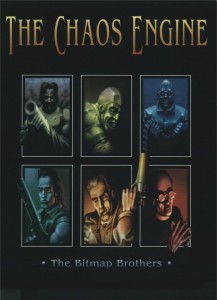 The Chaos Engine was released for the Amiga 500 in 1993, a top down run and gun game with elements of Steampunk this game was great fun and very original at the time.

The graphics are superb with very large chunky sprites and very detailed backgrounds (the artwork throughout the game is outstanding). The sound is also excellent with very meaty sound effects and superb music created by the legendary British computer game composer Richard Joseph.

The controls are also very responsive whether you are using the keyboard and mouse or even a joystick.

The gameplay is simple and fun basically shoot anything that moves, you can choose from any 2 of 6 available mercenaries, each one has different skills and abilities (if you are playing single player the cpu will control the other mercenary).

The plot involves the player trying to rescue Great Britain from Prehistoric beasts and vile monsters caused by Baron Fortesque’s Chaos Engine machine which has accidentally created an alternative timeline. 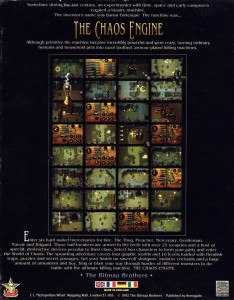 This game was later ported to most other format’s of the time (including the Megadrive and the Super Nintendo), but it is the Amiga version which is most fondly remembered.

If you still own an Amiga 500 you simply must try this classic.

One piece of trivia this game is known as Soldiers of Fortune in the United States.