After finishing my Gotek inside my A600, something that troubled me a long time came in front.
I love my Vampire and RTG modes, but I also want native modes which atm I can get either from Indivision SD/FF or from RGB to Scart. Ofc both of these solutions require either a dual input monitor (HDMI/VGA or HDMI/Scart, which I already have) or having 2 monitors.

Since I was always fond of auto switch between RTG and Native I though... what the heck, I have to try Ratte's switch like I had in the past.
Worst thing, is that I would use the parallel port signal if I couldn't find one inside...
After talking with highpuff (ikod.se) who was making a batch on Amibay, I decided to gief it a go after he told me that U8 that I knew on A1200 was also present on A600! Dafuq I never thought they were alike sharing the same signals :)

This is the new switch that I received along with plenty of cabling in PRO quality! (Thanks a lot Claes mate, you rock \m/)

Ok Natives were ok as I knew that Indivision would run ok with Ratte's switch as I tried in the past Indivision AGA, 4000, mk2 without issues.

What about RTG coming through HDMI though :S
First of all HDMI is only digital while Ratte's switch works only with Analog signals.
Only choice I had was to get an cheapo HDMI to VGA adapter from eBay like this...

After making all the necessary connections to a spare recapped A600 mobo of mine... this was the result (btw, I asked highpuff to make me a custom male RTG cable in order to feed it directly to the HDMI adapter). 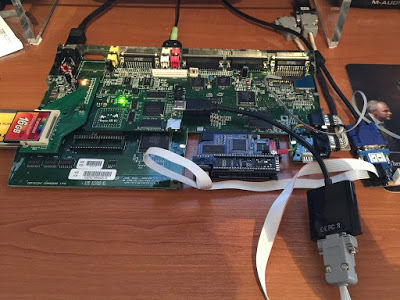 Result was SUCCESSFUL! OMG I couldn't believe it! Even putting SwitchControl in Startup-Sequence right before IPrefs gave me AUTO switching like it should!!!
After that I thought about dismantling the adapter to see how big it would be inside... Turns out it's rather slim

I couldn't leave the thick HDMI connector as it was would I?

One more test again and it was indeed successful as well! You can see in the following picture the U8 CIA adapter (what a PRO PCB man) 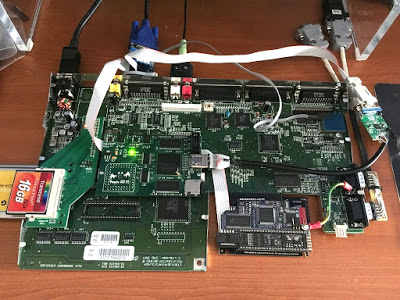 Here's a quick video about the booting and switching phases of RTG/Native using Ratte's switch on my A600.