The summer of 1989 was the summer of the Bat. Tim Burton’s dark, brooding Batman saw the Dark Knight return to his gothic roots, smashing box-office records worldwide and it was inevitable that a home computer game would follow.
Ocean Software clinched the deal. The Manchester publisher had already proven itself in the field of movie licenses with many high-profile titles such as Highlander, Platoon and Short Circuit. For such an important and lucrative license, development was carried out by an in-house team at Ocean. 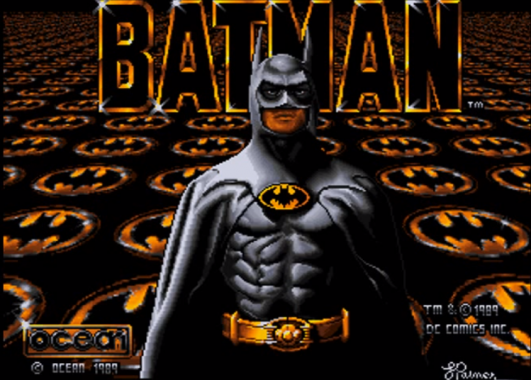 Batman The Movie is split over five levels, each recreating key moments from the film. The first level has Batman navigating his way through Axis Chemical Plant in pursuit of Jack Napier. Napier’s goons patrol the various ledges and walkways in the plant, firing bullets and lobbing grenades at our hero. Batman’s armor keeps him safe up to a point but each hit you take reduces it gradually, with grenades in particular taking a large toll. Toxic sludge and noxious gas escaping from various pipes also reduce Batman’s health. Take too much damage (nicely visualized by a graphic of Batman’s face being slowly replaced by the Joker’s as the hits accrue) and you lose one of your three lives. Thankfully, the level has a halfway and three-quarter way point meaning that once these points are reached, you don’t go right back to the start on losing a life, a “feature” which always irks us.
Batman is not totally defenceless and possesses an unlimited amount of batarangs with which to dispatch the bad guys. The player must use the various ladders dotted around the Axis plant to access higher ledges but the Bat rope can also be used to access out-of-reach areas. Pressing the fire button while pushing the joystick up will launch the Bat rope and, if standing under a surface which can be hooked onto, the player can gracefully ascend. The Bat rope can also be used as a weapon – diagonally firing the rope at goons on a higher level, or those on a ladder, will send them flying to their doom. 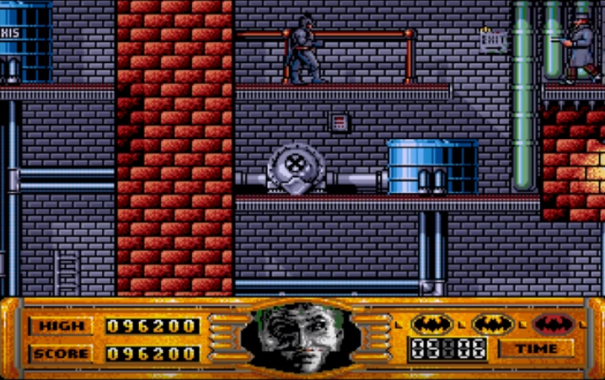 Battle your way to the top of the Axis plant and you’ll finally reach Jack Napier. Although the villain is armed he’s not too difficult to dispatch. A batarang to the face will sends the criminal mastermind plummeting into a vat of toxic sludge. Jack Napier may be dead, but the Joker lives… 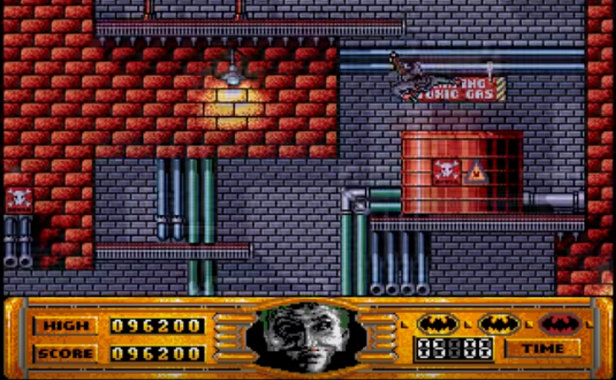 The second level sees Batman, having rescued Vicki Vale from the Flugelheim Museum, in the Batmobile racing to escape the Joker’s gang. It’s fair to say that this level (and the later Batmobile level) is the game’s finest hour and undoubtedly helped sell a lot of Amigas over the Christmas window of 1989. Many computer stores and high street retailers would leave these levels running as a demo in store front windows to attract consumers. This level is fiendishly tricky; the Batmobile takes damage whenever it collides with other traffic (of which there’s quite a bit) as well as buildings and lamp posts which decorate the side of the route.  The player must also contend with Gotham’s police force who, unhappy with a masked vigilante patrolling the streets of the city, have set up roadblocks at various points along the route. A large arrow at the top of the screen tells the player in advance where to turn in order to avoid these roadblocks. Here the developers have cleverly integrated into the game another key moment from the movie: in order to make turns at high speed, the Batmobile features a grappling hook which must be deployed by pressing the fire button. If timed successfully, the hook will anchor onto the lamp posts found at every junction and the car can successfully make the turn. You only get three attempts at this however: if you miss three turns in a row, you’ll run straight into a police roadblock and it’s a life lost. As with the first level, there is a time limit too, though thankfully once the distance is reduced to 50, losing a life will reset the counter to 50 instead of the original starting value of 99. 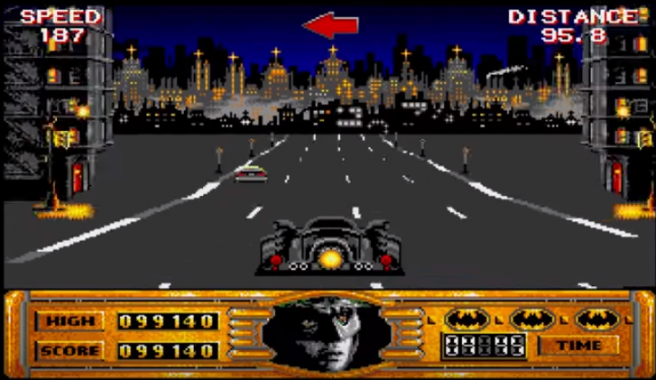 Onto the third level and Batman, having reached the safety of the Bat cave, must discover the combination of beauty products which will trigger the deadly Smilex chemical. There are eight products from which you must choose the correct three. Once again it’s a race against the clock – you have only 60 seconds to find the correct trio of product with only six attempts available. For each unsuccessful combination, you lose some energy. 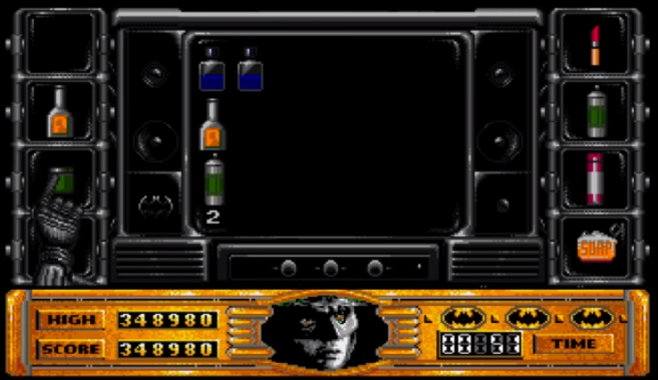 Once the Smilex combination has been cracked, Batman takes to the skies of Gotham for level four in the Batwing. The Joker has placed balloons containing Smilex gas at various points around the city – Batman must fly through the ropes which tether the balloons and their deadly cargo. The player can alter the altitude of the Batwing by pushing forwards or pulling back on the joystick. This positioning is critical as you need to fly cleanly through each rope in order to cut it. Flying into a balloon itself will burst it and release the Smilex gas; flying into the base to which each balloon is tethered (which in another nice graphical touch and nod to the movie are actually birthday cakes celebrating Gotham’s 200th anniversary) will result in an explosion and damage to the Batwing. Did we mention that each balloon you miss along the way also results in a loss of energy? Yep, this one is tough too. There are 99 balloons in total to release and with just 3 minutes on the clock, there’s no time to dawdle. You can speed up the Batwing by holding the fire button and pushing forward on the joystick. Be warned though: this thing really moves making it harder to be accurate when flying through the ropes, not to mention increasing the risk of colliding with the various buildings and lamp posts on either side of the street. As with the Batmobile level, this section is a marvel to behold and really showcases the Amiga doing what it does best. 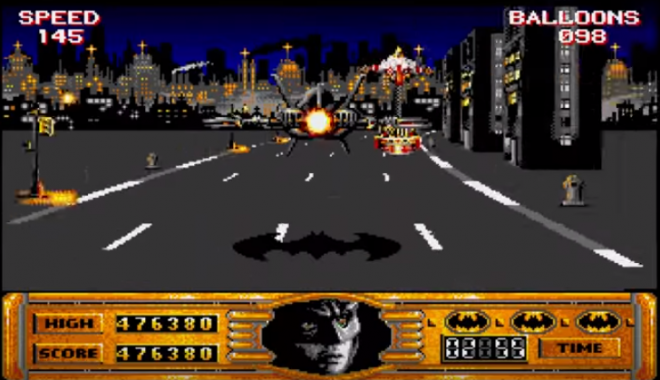 The final section is another platform affair in the mold of the first level. This time Batman must make his way to the top of Gotham city cathedral in order to prevent the Joker from making his escape via helicopter. The cathedral level is slightly bigger than the Axis chemical plant and features more of the Joker’s goons (and Bob) shooting and lobbing bombs at Batman. Additional hazards include rats, collapsing floors and spiked floors. Landing on the latter will result in instant death so clever use of the Bat rope is required in certain sections to avoid a sticky end.
Make your way to the roof of the cathedral and you’ll be confronted with a small army of goons who attempt to block your way as the Joker ascends a rope ladder to the hovering chopper. A diagonal upward lob of the Bat rope will knock him off and send him plummeting to his doom.

The graphics in the Axis and Cathedral sections are colorful but don’t exactly push the Amiga’s graphics hardware. There are some nice visual touches though – Napier’s main henchman Bob (played in the movie by actor Tracey Walter) is instantly recognizable, complete with long blonde hair, and sporting a trench coat and fedora. And as mentioned previously, Batman’s armor, as well as the Batmobile/Batwing shields are nicely visualized at the bottom of the screen as a picture of Batman’s face, gradually replaced by the Joker’s as the player takes damage. It’s an inventive little flourish that stands out and makes a nice change from the usual depleting energy bar.
Where the game’s visuals really shine is in the Batmobile/Batwing levels. Barrelling through Gotham’s traffic-congested streets never fails to impress, even for a game that’s 27 years old. The Amiga’s hardware shows what it can do when utilized properly and coder Jon O’Brien, who programmed the Batmobile and Batwing levels, squeezes every ounce of performance from the machine’s graphics chips to produce a visually stunning tour-de-force. There are lots of other graphical flourishes too, from the glowing engine burners of the Batmobile and Batwing, to the shadow of the Batwing on the street which actually gets bigger and smaller as you change altitude.
Audio-wise, the game’s title music is a little disappointing. For example, it would have been great to hear an Amiga version of Danny Elfman’s stirring main score on the title screen. Likewise, the in-game music is functional rather than rousing though the music on the Batmobile/Batwing sections is suitably fast-paced, mirroring the player’s frantic swerving between traffic/balloons. And the third level’s track ratchets up the tension nicely as you desperately try to find the correct combination of Smilex-tainted products while the seconds tick down.
The sound effects fare a little bit better. The goons on the first and last levels make a satisfying “Wuuuagh” sound when hit with the batarangs before diving off-screen and the batarangs themselves make a slick whooshing noise as they slice through the air towards their target. The sound of the bat rope being launched is a bit odd (although what exactly would a bat rope being launched sound like?) but in all the sound effects do their job nicely. We particularly like the Batmobile sound; it makes a suitably menacing growl as it accelerates through the streets of Gotham. 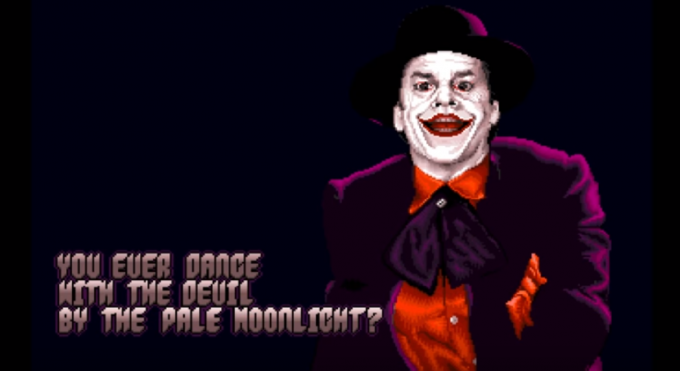 In some ways it’s hard to be truly subjective about Batman the Movie – it was the very first game we played on our brand new Amiga 500 so it will always hold a special place in our hearts. Biases aside however, Batman the Movie is still a solid and highly entertaining title which makes a damn good job of drawing on scenes and events from the movie. Far too often movie licenses were released on home computers which had very little in common with the source material, apart from the name. Ocean’s in-house team did a terrific job of capturing the spirit of Batman and produced a real winner. While some reviewers at the time criticized the familiar Ocean formula of stitching together several sub-games (platform/puzzle/driving), the formula had proven successful in the past on many occasions. The Batman license was a major deal for Ocean to secure and they weren’t about to risk stuffing it up by departing from a tried and tested formula.
Batman the Movie also represents a shift in the fortunes of both Commodore and the Amiga, particularly in Europe. Commodore UK released the Batman Pack in October 1989, which featured the game along with The New Zealand Story and F/A-18 Interceptor. The pack was an astonishing success and helped make the Amiga a firm favorite in the UK for years to come. Other packs such as Class of the 90s and Flights of Fantasy would follow, though none would come close to matching the dizzying heights of the Batman Pack.
Batman the Movie is a hugely entertaining title and an important turning point in the Amiga’s history. 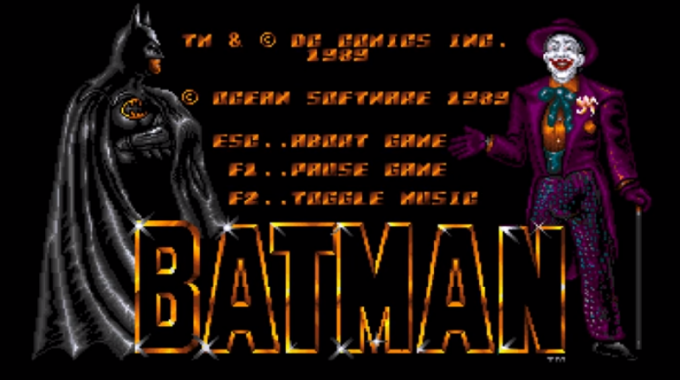