It’s hard to believe F/A-18 Interceptor is going on 30 years old. Developed by Bob Dinnerman and released by Electronic Arts (a company which had strongly supported the Amiga since its release in 1985), Interceptor retains a special place in the memories of Amiga owners from the late 1980s.

Dinnerman had worked at the legendary Bally/Midway in the early ’80s, writing several arcade games including Discs of Tron. While attending SIGGRAPH, the annual computer graphics conference held in North America, Bob witnessed several flight simulator demos, showcased by Evans & Sutherland. The programmer was inspired to write his own flight simulator for the home computer market and the Amiga seemed like the natural platform.

Interceptor was a labor of love for Dinnerman with the programmer putting in countless hours of design, programming and testing. The game’s stunning visuals were provided by Greg Johnson while the atmospheric title track was composed by Dave Warhol. 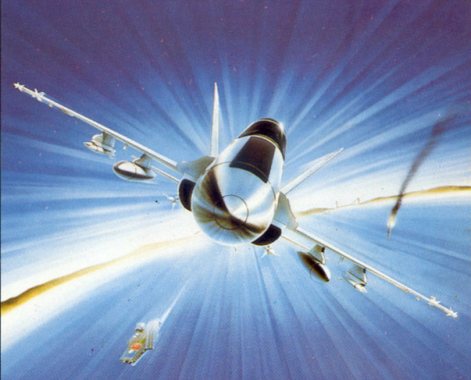 Interceptor is set in the San Francisco Bay Area in the year 1994. The majority of the action takes place in the F/A-18 Hornet, though the smaller and nimbler F-16 Falcon is also available for training and for the first mission. There are six missions to complete but before you get to fly active duty, you must first prove your worth as a pilot.  Qualification requires you to take off from the USS Enterprise carrier, stationed 20 miles off the coast. The player must fly around and successfully land back on the carrier, which isn’t as easy as it sounds; the carrier’s runway is a very small target in the Pacific and your aircraft needs to be carefully lined up. Get your approach speed or altitude wrong and you risk overshooting the runway or, worse still, slamming into the side of the carrier. It pays to practice this a bit as most of the missions involve taking off and landing on the carrier.

Lining up for a carrier landing. Gently does it now…

Interceptor places a firm emphasis on getting into the air as quickly as possible. Although it’s labelled a flight simulator, the player is not required to read reams of technical data and do dozens of equipment checks to get airborne. Dinnerman insisted that the game be easy to pick up and play. While some flight sim purists may complain, for us there’s no denying that Interceptor’s fast-n’-friendly approach is far more fun.

The Amiga’s function keys are used to control the amount of power delivered to the engines. F1 brings the engines to 10%, F2 to 20% and so on. Pressing F10 takes the engines to 100% and while at 100% power, another tap of the F10 key makes the F-18’s afterburner kick in, with a glorious sonic boom as your aircraft breaks the sound barrier. The M key produces a map of the San Francisco Bay area, showing your plane’s position and orientation (as well as other aircrafts’); the USS Enterprise carrier is also a constant feature on the map, allowing you to find your way back to a safe base for re-fuelling and rearmament at all times. The player can also land at San Francisco International Airport, Oakland international Airport and Moffett Federal Airfield.

Pressing Enter on the Amiga’s numeric keypad will change the viewpoint to outside the plane; the angle of view can be also changed by pressing keys 1 to 9 on the keypad. Watching your aircraft bank and turn from outside from a variety of angles is a joy. You can also look around while inside the cockpit by pressing 4 and 6 on the numeric keypad, very useful for checking the position of enemy planes in the thick of a dogfight.

Your aircraft comes equipped with two AIM-9 Sidewinder missiles and four AIM-120 AMRAMM missiles, as well as 500 rounds of M61 Gatling 20mm gun ammunition. Landing on the carrier will re-stock your plane’s depleted ammo supplies, as well as re-fuel the craft. Fuel is something you’ll need to keep a particularly close eye on, especially if you’re going heavy on the afterburner.

Pressing T on the keyboard activates an aircraft lock-on circle in your jet’s HUD (Heads Up Display). Both the F-18 and F-16 come equipped with electronic counter measures (ECM) which attempt to blind enemy aircraft to your position. Chaff and flares can also be deployed in the event of an enemy missile launch.

A very nice touch on the game’s main title screen is the option to view a demo of some basic aerial manoeuvres; a computer-controlled F-18 performs the moves over the Bay area. You can then select a practice option from the menu where you follow a lead aircraft which will perform these manoeuvres as you fly behind and attempt to copy each move. Some of these manoeuvers come in very handy in the thick of a dogfight.

Once you’ve earned your stripes, you can select to fly the first mission. Each successful mission completion makes the next mission available for selection. Your first operation, Visual Confirmation Mission, sees you scramble from the carrier to intercept two bogeys that have entered the area. The player must fly by the unidentified aircraft to determine whether they’re friend or foe. Aircraft not yet identified show up as black on the map; friendlies will appear as white while enemy aircraft are depicted in red. Once the bogeys have been identified, the player must return to the carrier; in the event that the aircraft turn out to be hostile you’re instructed not to engage them unless fired upon first.

Mission two, Emergency Defence Operation, sees Air Force One, the U.S. president’s plane, attacked by two MIG-29 fighters. Air Force One’s escort fighters have been destroyed by the MIGs so the player is instructed to immediately engage and destroy the hostiles while Air Force One lands at San Francisco International.

Escorting Air Force One to safety

Unless you’ve engaged the MIGs in the first mission, this will be your first time dogfighting in Interceptor. Pressing T will cycle your aircraft’s radar system through any bandits in the area, with their heading, speed and altitude displayed on your HUD. It’s a thrilling experience, especially when multiple enemies are in the area. The MIG fighters are tricky to pin down and some very fancy manoeuvres are required in order to get a lock on them.

Mission three, Intercept Stolen Aircraft, involves chasing down two stolen F-16 aircraft which are heading for enemy territory. The player must fly by the F-16s in an attempt to make them change course and return to Moffett Airfield; however, if the pilots refuse to turn back, the player must destroy both aircraft to prevent them falling into enemy hands. Two MIG-29s are providing support to the stolen F-16s so you’ll have your hands full on this one.

The player is tasked with a search and rescue operation in mission four; an F-18 jet has been shot down with the pilot bailing out near the Farallon Islands, 30 miles west of the Golden Gate Bridge. You must fly low over the islands and launch a rescue pod from your craft close enough to reach the pilot. Two MIG-29s are patrolling the area, keeping you on your toes.

Mission five is a tense affair. A cruise missile has been launched toward San Francisco; your job is to intercept the missile and destroy it before it reaches its target. This is particularly tricky since the player must match the missile’s high speed and very low altitude (200 feet!). It’s afterburners all the way to intercept and destroy the incoming missile.

The final mission, Carrier Sub Mission, sees hostilities break out between the U.S. and an unnamed enemy. A submersible aircraft carrier appears off the west coast of the U.S. launching multiple enemy aircraft, all of which must be destroyed. This final operation became something of a legend in Amiga gaming circles with many players believing it was impossible to destroy the enemy carrier and thus finish the game. While you can’t destroy the carrier with missiles, the mission is considered complete when the player engages and destroys all enemy aircraft. The confusion probably arose from the fact there is no message or indication that the mission (and game) has been successfully completed.

While Interceptor’s visuals may look dated to those raised on a diet of modern 3D games, it’s important to remember just how much of a technical marvel it is for its time. 3D gaming on home computers in the ‘80s was something of a novelty; the majority of releases for 8-bit platforms were 2D and even the more powerful 16-bit machines struggled with 3D visuals due to the taxing demands placed on the CPU. Despite the limitations of the hardware, Interceptor remains a visually stunning experience. The game’s sparse landscape allowed the Amiga to maintain an impressive framerate, a crucial element for any action game. Watching from outside the cockpit as your plane manoeuvres still impresses today, as the camera swoops around to keep the plane centered in view. There are countless visual flourishes too, from the glowing engines of your plane’s afterburners to the billowing smoke from a stricken jet as it hurtles towards the earth.

Backing up the impressive graphics are some incredible audio effects. Dinnerman spent countless hours experimenting with different sounds to accurately convey the feeling of being in a multi-million-dollar fighter jet. The low rumble of the jet’s engines idling on the runway is impressive enough but hit the afterburners and there’s a heart-stopping roar as the engines’ afterburner ignites. The aircraft shudders as it breaks the sound barrier, further instilling a real sense of movement; it’s little touches like these that really lift the game. Further in-game sound effects also add to the atmosphere. Who can forget the frantic alarm of your plane’s missile warning system when an enemy missile locks on to your position; or the terror of running out of fuel while 30,000 feet in the air, the roar of the engines replaced by the sighing of the wind as your plane dips towards the earth. 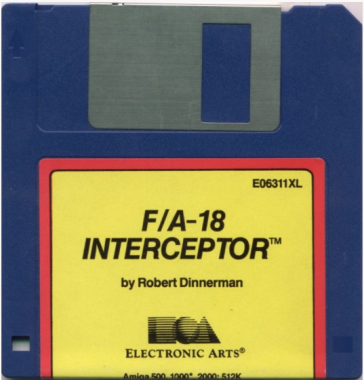 Thrilling, immersive and bags of fun to play, Interceptor paved the way for countless flight sims on the Amiga. While the graphics may have improved in later titles, very few of them managed to capture the magic of Bob Dinnerman’s Amiga debut. If there’s any flaw, it’s that the game is too damn short. When something is this much fun to play, you want the missions to keep on coming. Still, what’s there is solid gold. Whether dogfighting over San Francisco, flying under the Golden Gate Bridge or just banking and rolling over the Pacific for the sheer fun of it, F/A-18 interceptor is a stone cold Amiga classic.