It is amazing to see that we have new games for Amiga CD32 in 2016! Today I want to take a look at  a new CD32 game called Catacomb 3D, which is a sneak preview of the game provided to me by Pascal Papara ahead of it's release. Thanks mate! 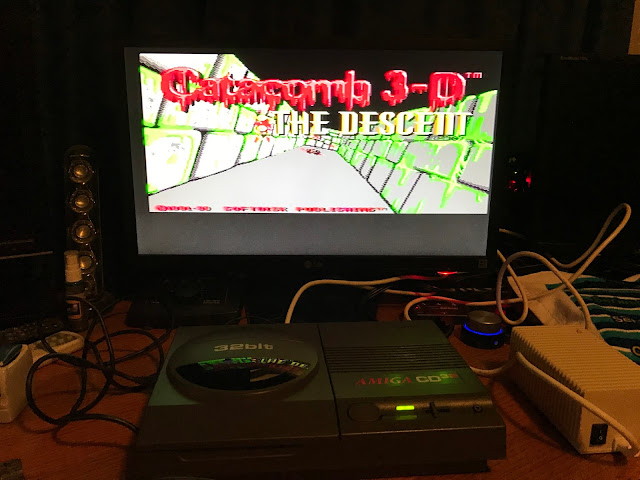 For those who know their game history, they will know that Catacomb 3D was originally written on the IBM PC in 1991 by ID Software, and was the prequel to the classic game Wolfenstein 3D. 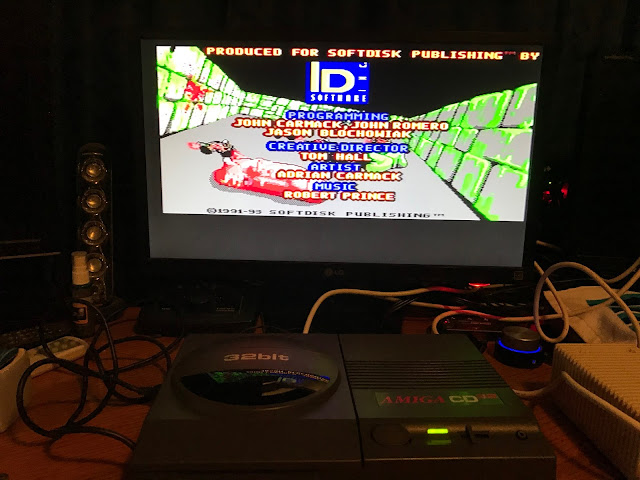 I am embarrassed to say I have never played Catacomb 3D before, and so the first time I have ever played it is as a port to the Amiga CD32 in 2016!

The funny part was I remember back when these 3D PC games in the 1990's were being touted as not being able to be run on an Amiga and was a strong reason why many people went PC to play these games.

How wrong was that decision - we have Doom, Quake, Heretic, Hexen, Wolfenstein 3D, Descent, Rise of the Triad and many other PC games from that era that run fine on Amiga!

And now, in 2016 we have the game that started it all, Catacomb 3D on Amiga CD32! It was ported by Bzili, and will be released soon as commercial game to purchase as a CD32 title from Ares Shop, Ebay and potentially other vendors that are interested in distributing it! 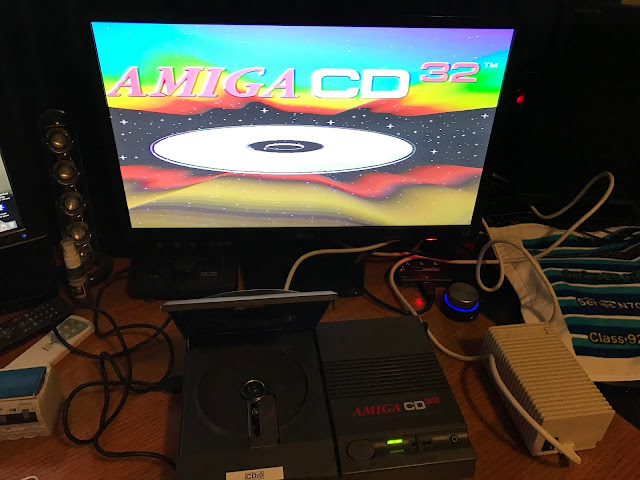 As with most ID Software titles of the period (Commander Keen, Wolfenstein 3d), the main menu to the game allows you to start new games, load a game (I would assume saving doesn't work given it is CD32 - not tested): 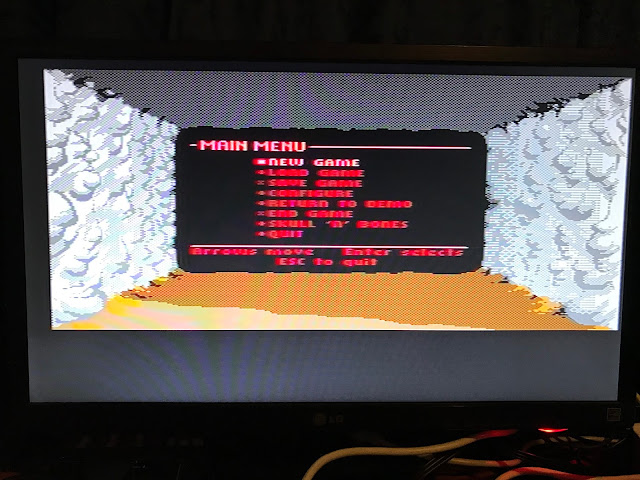 You can even play a simple pong game from this menu called Skull N Bones! 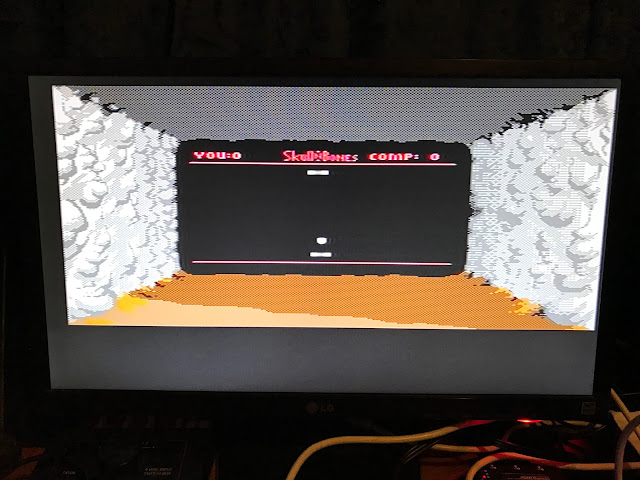 Anyway, distraction aside, lets get into the game proper, starting with the CD32 controls, included in the manual to come with the game: 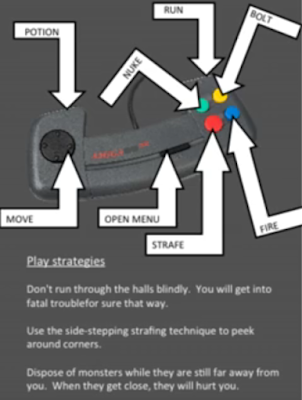 From the main menu we can choose Easy/Normal/Hard game style - I wimped out and chose Easy: 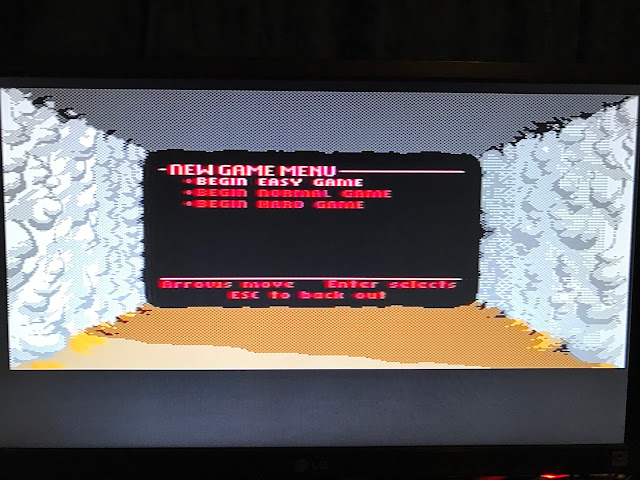 We start entering the level called "The Approach": 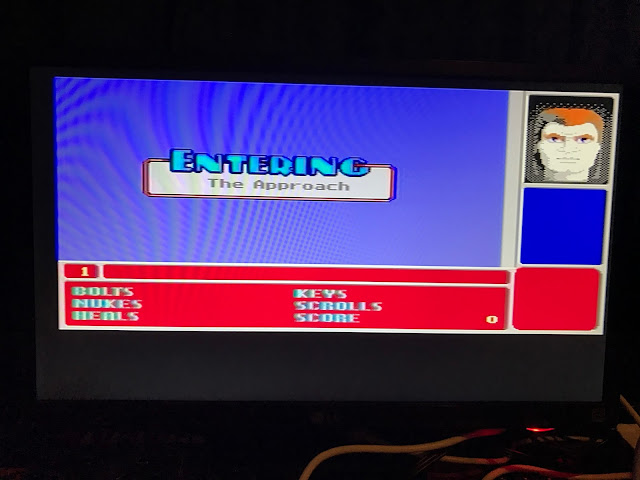 Still makes me smile seeing this running on a CD32! 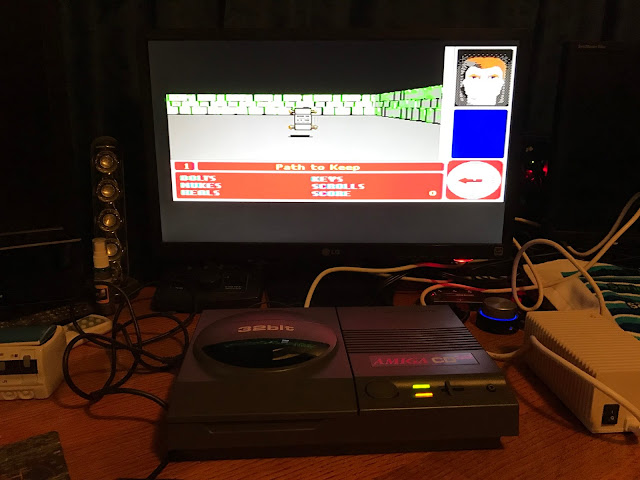 In this game you need to locate the exit gates to progress to next levels, but there are keys to find, as well as additional weapons that can help defeat the enemies along the way: 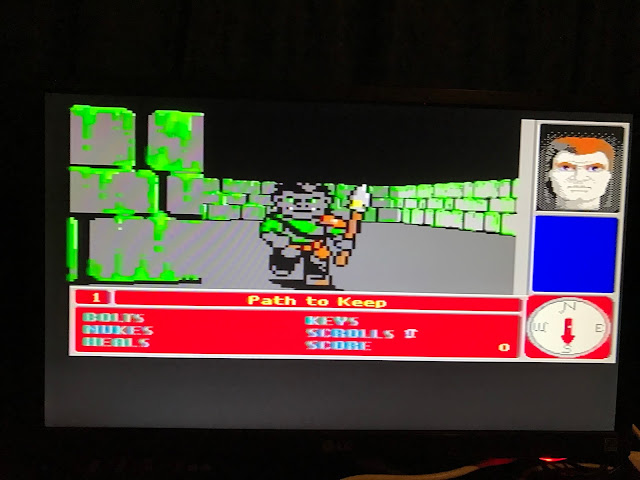 The longer you hold done the fire button, the more powerful the shot you fire. The level is indicated by the level of the nuclear explosion graphic on the right side of the display. 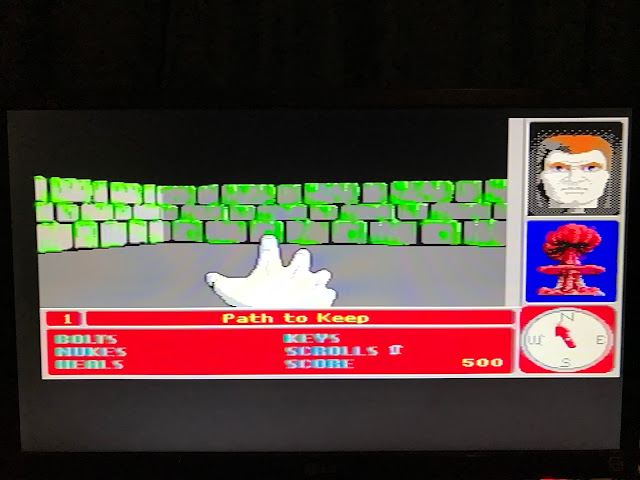 The Health boosters (called Heals) are essential to get anywhere in this game as you need to keep healing yourself as you go along. These functions are mapped to various buttons on the CD32 joypad as shown earlier.

Health is shown graphically with your head on the top right, which turns into a skull the more times you are damaged. You die if it changes to a full skull! 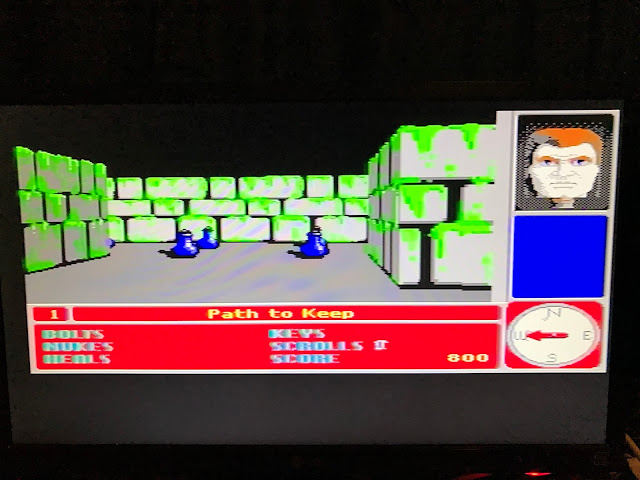 A little later in the level and you can see the blue circle indicating an exit gate: 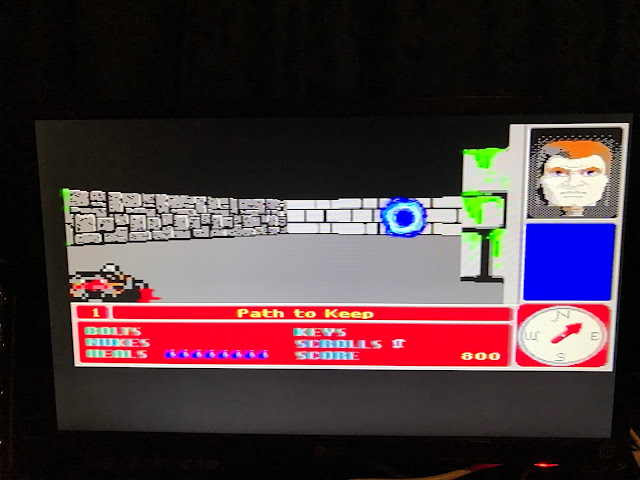 I then moved on to the next level, Nemesis's Keep: 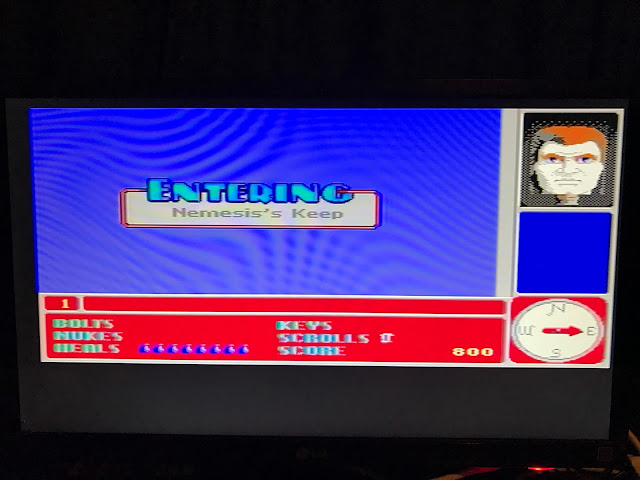 Things start getting trickier from here as we need colour coded keys (located in the level) to open locked off sections of the level: 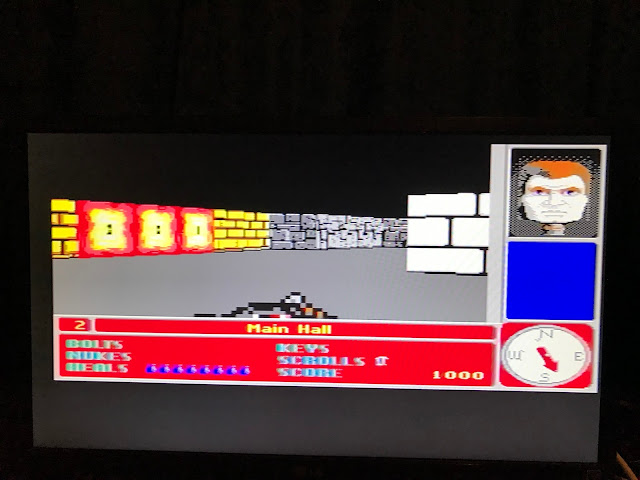 Here is the red key: 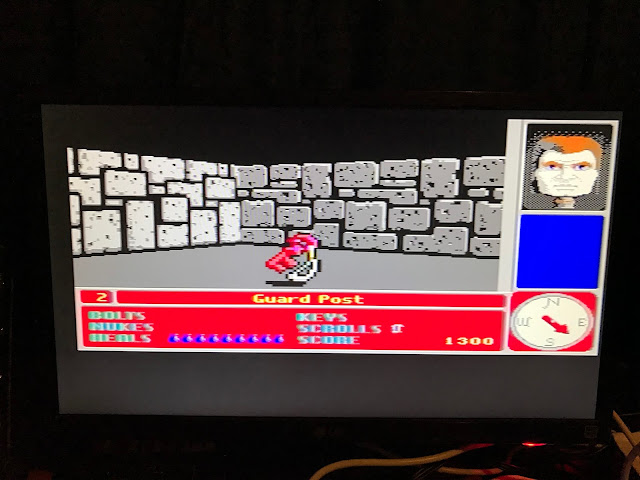 Making things even more interesting is that you can shoot the walls, some of which reveal secret tunnels and passages - some even lead to whole secret levels! 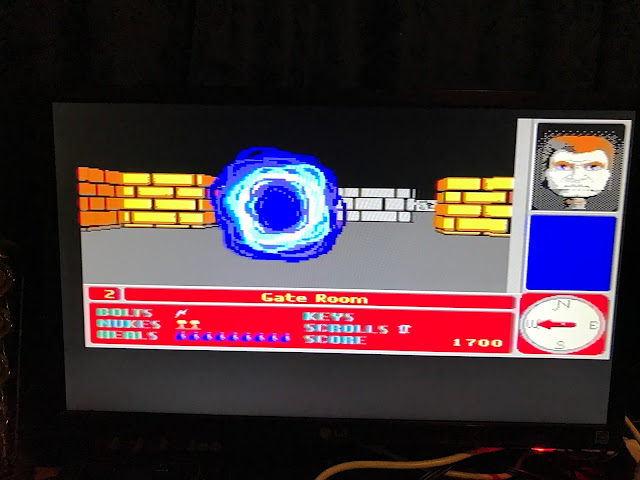 Here is an example hidden room, which I shot at a wall to reveal: 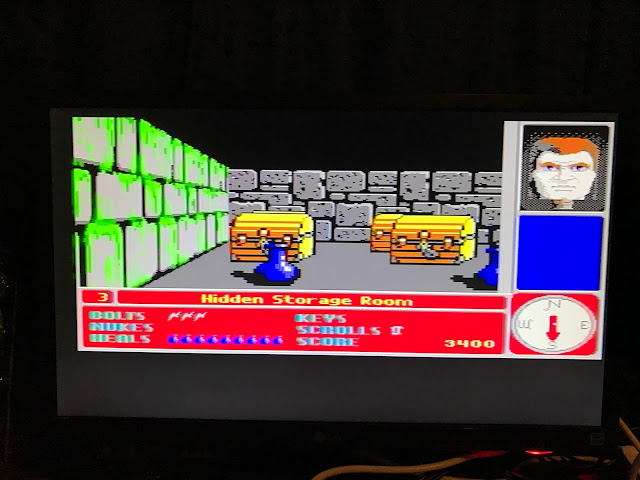 As always the enemies are close at hand to slow down my progress: 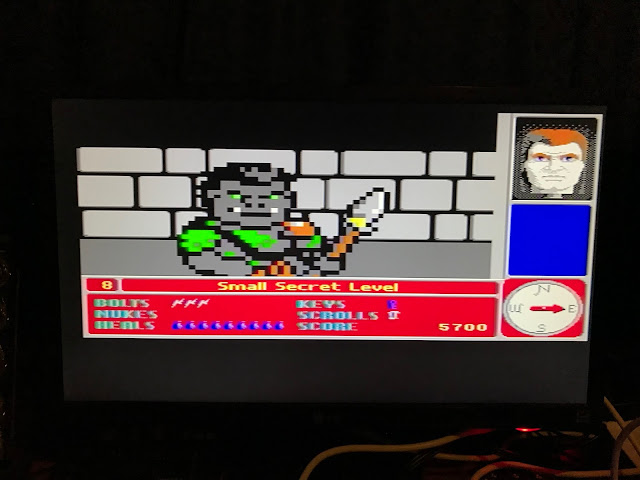 Moving through the game, and several levels in now things seems easy enough until you start finding some really nasty enemies that require a lot of shots, nukes and bolts to kill. I found myself healing constantly and realised this game is definitely not easy: 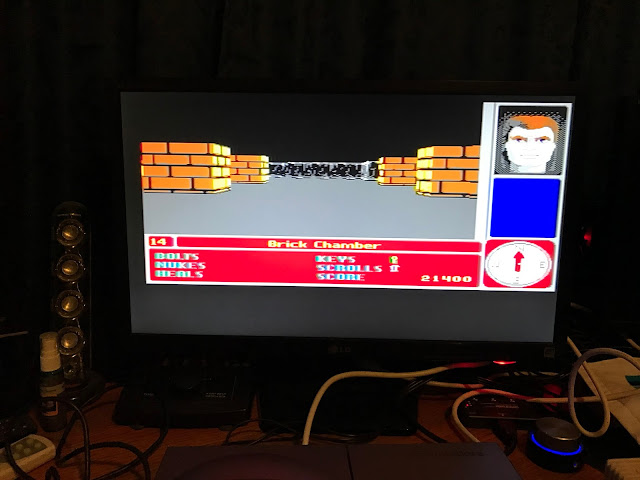 It was about this time that my luck ran out in the Brick Chamber, with two nasty enemies taking me apart and with no bolts, nukes or heals left I was easy meat: 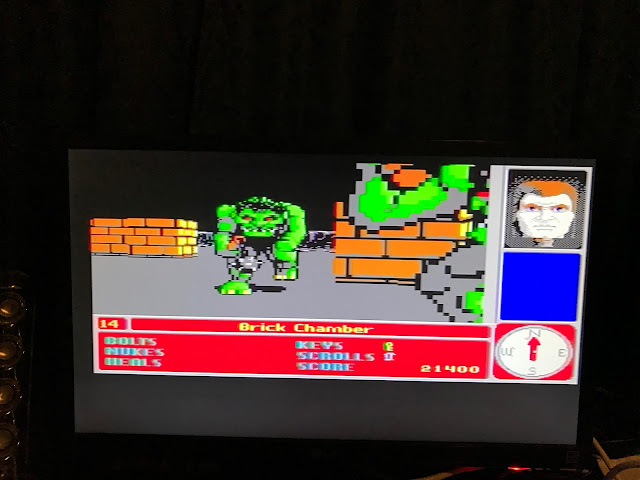 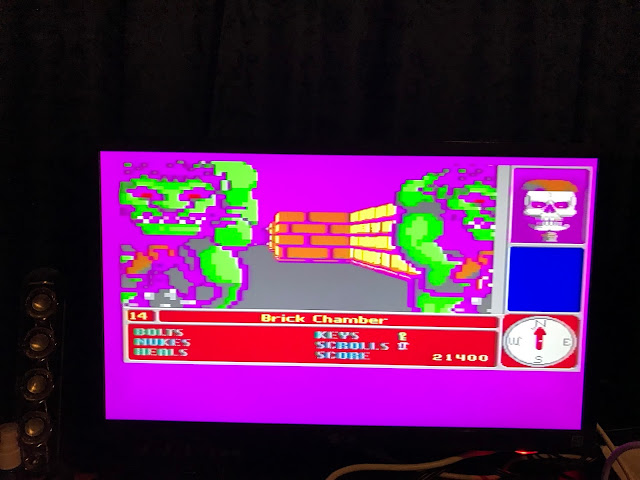 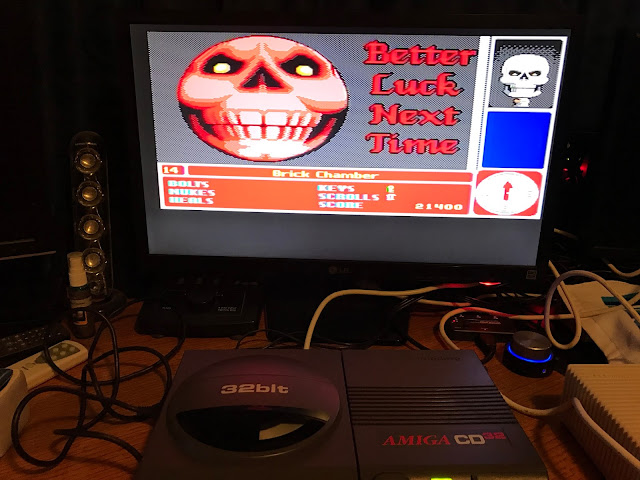 This game will also run on Amiga 020 systems like Amiga 1200 and 4000, and ideally runs best with 4MB Fast memory. It does run ok on 2MB memory though, like on my Amiga CD32 I tested here.

Catacomb 3D is a very fun and challenging game. I am grateful for the sneak preview of the game on CD32 and it is expected to be released very soon to purchase, so keep an eye out for it!