My slice of cake! Yuumiga

It's already mid February and so much is happening in our Amiga world. I've just returned from a whistle-stop Amiga focused business trip to London, Cardiff, Brussels and Dublin. While I was in Belgium, thanks to Timothy de Groote the Managing Director of Hyperion Entertainment, I saw the Tabor board booting a beta version of AmigaOS 4.1 Final Edition for the very first time.

I also managed to fit in a side trip to the Amiga Ireland 2017 Meetup in Athlone and ate some cake celebrating the 30th birthday of the Amiga 500, courtesy of Jarlath Reidy and his band of Irish Amiga enthusiasts. 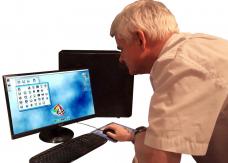 The cake was washed down with a few pints of Guinness too, quite a combination! Look out for my brief update in the next edition of Amiga Future magazine along with with the second and concluding part of my interview with David Pleasance & Colin Proudfoot, the former joint Managing Directors of Commodore UK.

As I've already been heavily involved in two major AmigaOne next-generation PowerPC motherboard projects you might think the news that the developer pre-release version of AmigaOS4.1 Final Edition is now available for Tabor beta testers would not be a big deal for me? Nothing could be further from the truth. Our band of trusty Tabor beta testers have been putting the Tabor motherboard through its paces for over a year using versions of Debian PowerPC. However, although Linux is really good for testing the hardware, it's not the operating system that the Tabor motherboard was designed for. With release of the first AmigaOS 4.1 developer iso the Tabor is at last transforming into the AmigaOne A1222 and, despite what you may have read, it's promising to be a powerful little machine with an entry level price. My own Tabor motherboard sat idle for the past six months while I concentrated on my AmigaOne X5000 but over the weekend I built my AmigaOne A1222 system using the Nexus psile case from my first Sam440ep. I downloaded the latest amigaboot.ub module from the Hyperion Entertainment ftp site and "flashed" it to the firmware stored on my microSD card. I like the fact that the Tabor motherboard (and the Cyrus Plus board) have the firmware image stored on a microSD card which can easily be rewritten or replaced with little chance of "bricking" the motherboard. I then downloaded the AmigaOS 4.1 F.E, Update 1 beta iso and burned it to a CD using my AmigaOne X1000. Nothing like keeping it in the family! Of course I could probably have booted from a usb flash drive but I like to keep all the CD versions of the beta isos I use. For some reason the slimline CD drive was not recognised by my Tabor board so I replaced it with a Samsung optical drive and booted my AmigaOne A1222 for the very first time. It was a really great feeling seeing the familiar AmigaOS Workbench appear on the monitor. Of course it's only an early developer release but now the Tabor beta testers have something to get their teeth into. Bring on the next serving.

The cherry on the cake!

Talking about cake and food, in more AmigaOne A1222 news, an exciting revelation by Golden Code developer, Daniel Müssener, author of the Tower 57 AmigaOS 4.1 port. Apart from his amazing game development skills Daniel is also writing the OpenGLES2 wrapper for Warp3D Nova for A-EON Technology. Anyway he contacted me to let me know he couldn't resist compiling a version of his Tower 57 game using native SPE code for his Tabor motherboard running AmigaOS 4.1 beta. And the result? I'll let Daniel tell you in his own words: "It works - and it runs fast! Much faster than on a Sam460. As you probably also know I constantly record & post progress videos. Now the question is: may I post such a video of T57 running on the Tabor?" I had the privilege of seeing the first public demo of Tower 57 running on Allan Ullmann's AmigaOne X1000 at the recent Amiga Ireland 2017 show. The fact that it also runs really well on the AmigaOne A1222 is really good to know. Oh! and did I give Daniel permissions to post his progress video? You bet I did!!

If you want to support Daniel's work for AmigaOS 4, MorphOS and AROS please click on the donate button on his website. I made a small donation to his Amiga cause. It good to know I'm not the only one who see Boing Balls everywhere and brain-washes their children! Amiga Ireland event organsier, Jarlath and his wife Aisling went on a recent family holiday to Thailand. On leaving Chaing Mai international airport on their arrival in Thailand, their daughter Ana, who is about 10 years old, pointed to a red & white checked water tower and exclaimed, "look an Amiga ball". Jarlath just had to take a photo to celebrate his daughters advanced knowledge and intelligence!

Laying down the "Boing" floor!

... and just in case you thought I'd removed my "Boing Ball" tinted spectacles, I spotted this on a van parked near to Timothy de Groote's house when I was in Belgium.