To be this good?

First of all apologies for the relative silence. I started writing this update in late April while I was sitting in an airport lounge waiting for a flight to take me to another Amiga show. To be exact, the VCF SE 5.0 in Roswell, Georgia which is not only an Amiga show but celebrates the whole Retro computing scene in all it's glorious forms. 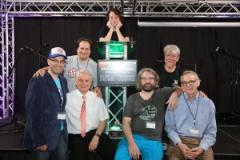 However, unlike most of the other computers on display at the event the Amiga is very much alive and kicking with new hardware and software in development. Adam Spring, of the Remotely Interested podcast fame, was one of the show organisers and was keen to promote Next-generation Amiga developments to a wider computing audience. He also a arranged special showing of Zak Wedington's Viva Amiga documentary after which I took part in a panel discussion moderated by Adam which included original Amiga developer, Glen Keller, Anthony Becker and “Amiga Bill” Winters of  the Guru Meditation Media Channel and Aaron Ruchetta, a video toaster specialist from the Atlanta Amiga scene.

Thanks to Ken Lester who made the long 14 hour drive from Michigan with his precious cargo, I had the opportunity of displaying the AmigaOne X5000 and prototype AmigaOne A1222 system. We were unable to show AmigaOS 4.1 beta running on the A1222 but I recorded a video of my own A1222 beta system before I left New Zealand. I played the video under Linux on the A1222 in a surreal art imitating life experience. It was a bit confusing at times when I tried to use the mouse only to realise it was my A1222 AmigaOS 4.1 video running under Linux. Duh!!! Not only did Ken donate his valuable hardware he also helped me out with the A-EON display. We were joined by fellow Amigans and developers Alex Perez and Lyle Hazlewood and needless to say we all had a great time both during the show and into the wee small hours of the morning. If you want a more detailed overview of our VCF SE adventure please read the current edition of Amiga Future magazine.

Carrying on with the global travel, everything is a plane ride from New Zealand. In June I made my way to the UK to attend A-EON Technology's AmigaDeveloper DevCon 2 in Cardiff. Unlike DevCon 1 which focused on Linux, the latest event was solely dedicated to AmigaOS, both PowerPC and 68k. If you want to hear more about my trip you need to read my DevCon 2 visit report in the next edition of Amiga Future magazine. Before this begins to sound like an advert for Amiga Future magazine, after the DevCon I made a quick trip to Brussels to attend the Hyperion Entertainment Shareholder's AGM.

It was good to meet up with the Hyperion Directors, Costel Mincea and Timothy de Groote along with AmigaOS contract Developers, Hans-Joerg and Thomas Frieden to discuss current and future strategy. In the evening we enjoyed a nice meal and were later joined by fellow Hyperion shareholder Ben Hermans for a few (too many) drinks at the Yeti centre in Eeklo. This time Timothy and I did not attempt any team building exercises in the Prison Island complex.

Every now and then I like to provide an insight into some of the very talented people who contribute to A-EON's work and the current Amiga scene. It's probably no surprise that most of them cut their teeth on Commodore 8-bit and/or Amiga computers and the same can be said of John Paul Adrian Glaubitz who is an Debian specialist from Germany. Adrian, as he prefers to be called, has been running a Tabor board almost 24/7 for about a year, helping to build special Debian powerpcspe packages. We recently sent him a second Tabor board to help speed up the process and now both boards are working 24/7 churning out Debian powerpcspe builds. Of course A-EON created the Tabor board to run AmigaOS 4.x but it good to know that the hardware has being thoroughly tested over a long period of time. I'll let Adrian tell his you own Commodore/Amiga story. 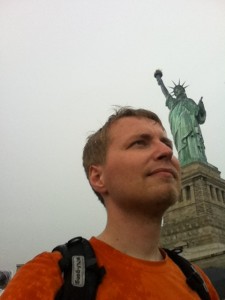 My name is John Paul Adrian Glaubitz although my primary name is Adrian. I was born in 1982 in East-Berlin and grew up there until the wall fell. I have been interested in science and electronics since I can remember. So around at the age of 4 or 5. My first computer was a Commodore C64 in 1990/1991 (actually, it was my brother's but he'd let me use it) and it was shortly complemented by a Commodore Amiga 600. I have been an avid Commodore and Amiga fan ever since. In fact, I am still actively contributing to Debian's m68k port which targets the CPU found in all Amigas. When my parents finally bought a PC in 1997, I was very underwhelmed by the performance and the strange user interface design of Microsoft Windows, so it took not very long until I discovered Linux which was in 1998 with SuSE Linux 5.3. From this point on, I had both Linux and Windows installed on my Pentium II PC (266 MHz(!)) and I dual- booted into Linux. About 2-3 years later - around the time when WindowsXP was introduced - I stopped caring about Windows altogether and used Linux almost exclusively. After some distro hopping, I ended up installing Debian. When I entered university, I decided to study physics and was happy to see that the majority of workstations and servers were running Debian, so it didn't take very long until I got a student job in the IT department of the Physics department. Over the years, I grew experience and started hacking Debian myself which eventually resulted in me becoming an official developer of the Debian project which I still am. After graduating Physics, I first started doing my PhD in Oslo at the University of Oslo, but I wasn't really happy there so I returned to Berlin after a year to start working.

After first working at a systems administrator, I later joined a small startup company in Berlin called Endocode and, a year later, I joined SUSE. I enjoy learning languages, so I speak Norwegian, English and Japanese albeit my Japanese could use some more practice which I usually get when traveling to Japan twice a year. I enjoy programming and have contributed to various open source projects like Firefox, systemd, QEMU and the Linux kernel.

If you want to find out more about the two Tabor boards assisting with Adrian's Debian powerpcspe package builds, check out Atlantis and Pathfinder under Status - powerpcspe.

I receive a lot of requests for interviews from Amiga webzines, journals and blogs etc. I always do my best to answer all the questions that are put to me, although I have to admit sometimes I am a little slow in finishing my replies.  You may have seen a recent interview I gave to Generation Amiga and I've just completed another marathon interview for Retro Planet, the Greek language magazine which is celebrating its 5th Anniversary. As I wrote in the interview, I could not believe it's been almost five years since they interviewed me for the inaugural edition of the magazine. As with the first interview, they again asked a lot of tough questions. Unfortunately Retro Planet is in only produced in Greek but hopefully, as they did last time, they will post an English language translation on their Retro Planet website.

If you read A-EON's recent news item covering the v1.3 update of the Enhancer Software package, as dedicated Amiga enthusiasts you will have no doubt spotted our little play on words which harks back to the days when Commodore was poking fun at Sega after the release of the Amiga CD32.

Painting with colours (or even colors) 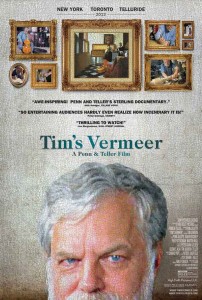 Somehow I missed this story but, back in 2103, Tim Jenison the co-founder of NewTek, the company behind the amazing Amiga powered Video Toaster featured in a documentary film detailing his attempts to duplicate the painting techniques of Johannes Vermeer, a 17th Century Dutch master.  Vermeer was famed for his used of light in his highly photo-realistic paintings. Tim wanted to test and hopefully prove his theory that Vermeer used optical devices to help him paint. The documentary, entitled Tim's Vermeer, premièred at the 2013 Toronto International Film Festival. It was produced by the illusionist duo of Penn & Teller who, back in to 1990's, created several publicity videos for NewTek. including the Penn and Teller's Guide to Toaster Etiquette.

In the documentary film, Jenison uses a special optical device which he created to aid his painting and to prove that Vermeer must have used something similar. It apparently it took him four years to painstakingly recreate The Music Lesson, Vermeer's classic masterpiece. However, because illusionists Penn and Teller were involved in the production some people have claimed that the documentary is an elaborate hoax as Tim is rarely seen actually painting with his optical device in the film. Hoax or not, it's still a good movie and has a rating of 89% on Rotten Tomatoes.

Of course, we Amigans will forever associate Tim with the Video Toaster, the device that completely revolutionised TV studios in North America and other NTSC regions. Unfortunately, for the rest of the Amiga world with our PAL and SECAM systems we could only look on longingly as our North American Amiga cousins had all the Toaster fun.

Talking about films, I am an Executive Producer of the Commodore Story documentary being created and directed by Steven Fletcher of WavemStudios. He has set himself the very ambitious task of telling the whole Commodore story from the first 8-bit PETs, Vic20 & C64 through to the Amiga from interviews with managers, engineers, games developers and users. The movie is scheduled to be premièred in London at the 500 seater Genesis Cinema on December 9th, 2017. As an an Executive Producer I have 20 tickets to give away for the performance. So if you want to attend the London première and join me for some mid-Winter Amiga fun, please send me an email to contact(at)a-eon.com with "The Commodore Story Premiere" in the subject line. I will allocate the tickets on a first come first served basis to the first 20 applicants. I hope to see you at the première. I'll even let you buy me a drink afterwards.

I started this blog as I was departing for an Amiga show and it's quite apt that I'm finishing it on the eve of another one. I've just landed in London and tomorrow I'm travelling over to Stansted to meet with David Pleasance. We are flying into Lublin on early Saturday morning to attend the AmiParty in Poland. We have been promised two days of wild partying serious Amiga discussions and some Triple-A fun.

so until next time.