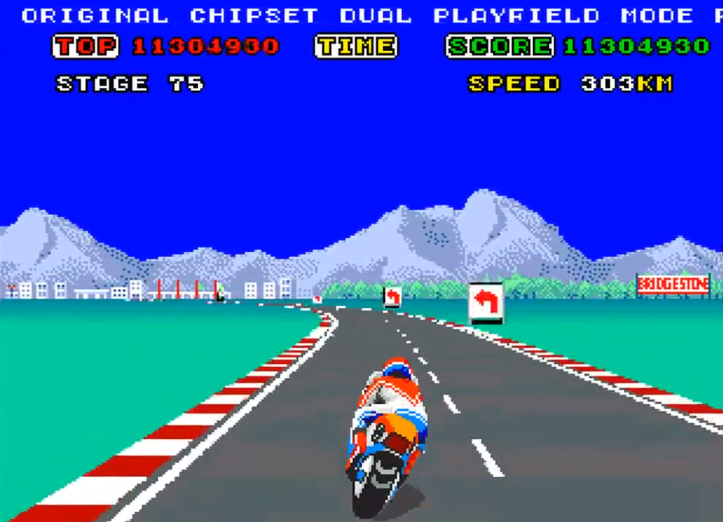 Code, graphics and music by Vesuri.

According to the authors, this is a proof of concept for arcade perfectness on the Amiga, inspired by not so stellar Amiga ports from back in the days.

The demo runs on any Amiga with 1 MB of memory.

Here is the information about the production from their YouTube video showing it running:

This proof of concept for arcade perfectness on the Amiga was inspired by the various not so stellar Amiga ports from back in the day. 50FPS should have been possible on the original hardware but as long as it hasn’t been implemented it doesn’t exist so there was only one way to be sure. In theory the Amiga hardware is a reasonable fit for a racing game of the era with the dual playfield mode giving good control over the race track and the objects on top. The copper can handle the race track while the blitter is busy with the objects and the CPU can orchestrate it all. Color count limitations aside it does indeed work pretty well but unfortunately there is a considerable drawback due to every single thing competing for memory bus access. The other main hurdle is the amount of chip memory needed for the graphics. Adding some real fast memory to the system helps quite a bit. The Amiga 1200, on the other hand, would be perfect for an accurate port with 16 colors per playfield as in the original and enough memory and bandwidth to support it. Perhaps a project for some other crazy MF?