Today I wanted to take a look at the Microbee CGA to VGA upscaler, which is able to be used on the Amiga to scan double and de-interlace the Amiga native RGB output to a modern TFT screen.

I must first apologise for the lateness in blog posts. I have been very busy with my new job, which I started recently. I have also been distracted by other projects and training I am working on that are not Amiga related to keep learning new IT skills.

However, last week I received notification from Facebook that Microbee finally had stock of their upscaler devices, (HDMI or VGA output) which are compatible with Amiga's too.

Normally these units sell out VERY quickly and I have missed out multiple times in the past, so I quickly jumped on their website to grab a VGA version (AUD$129), and the optional Amiga RGB to CGA cable (AUD$22). 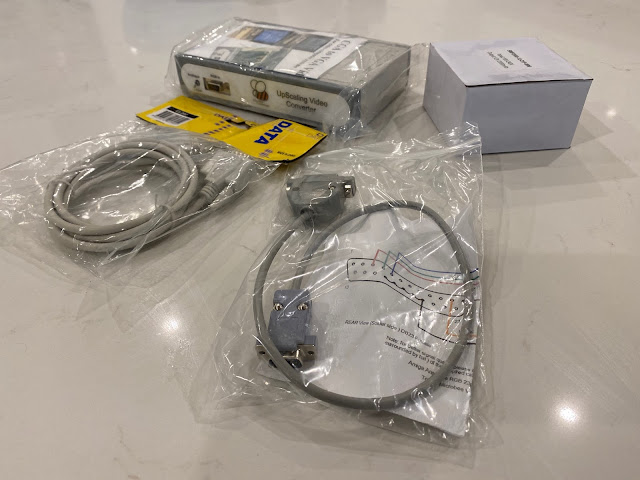 It arrived in the post the other day, and after the usual heavy cleaning due to COVID-19, I could use it.

I bought this device for use on my Amiga 1000. It is the only Amiga I own without a scan doubler installed. The indivision ECS doesn't fit in the A1000 due to the daughterboard on top.

Until now I have been using a 15khz compatible TFT screen with the Amiga 1000, connected to a AmiVGA connector to the RGB port. 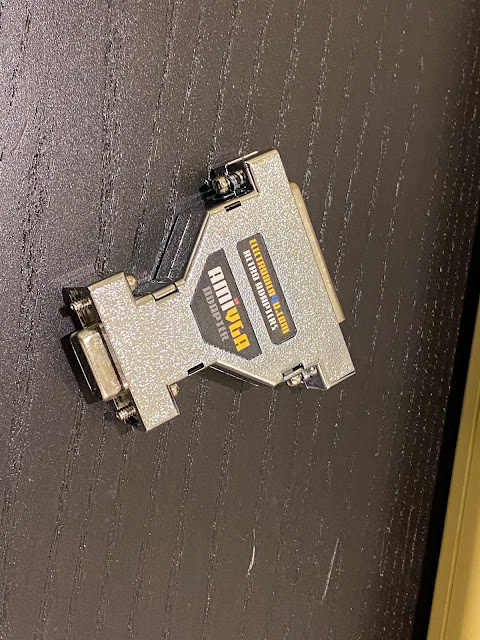 Problem with this is mainly that interlace modes don't look good, and the fixed resolution on a 16:9 screen looks a bit funny, with some screen artefacts (lines) that make it less than optimal.

Enter the Microbee upscaler. Microbee is an interesting company, having made the local Australian built Microbee computers in the 1980's which were used in schools and homes too. I used one myself in computer classes in the 1980's in Perth.

I never owned a Microbee myself sadly. The company these days makes this Upscaler to enable the Microbee computer to be displayed on a TFT screen (CGA to VGA). To make it appeal to a broader market they made an Amiga RGB to CGA cable and tweaked the settings to make it work with the Amiga (and other systems like Commodore 128, etc). 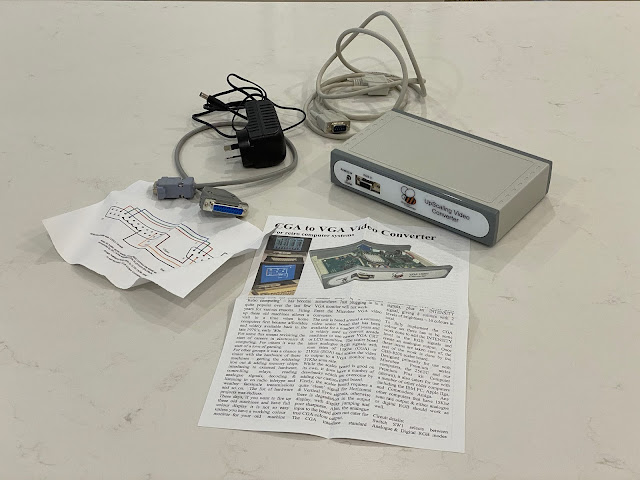 Close up of the Amiga cable - it uses a real DB23 connector, not a shaved 25 pin one, which is great: 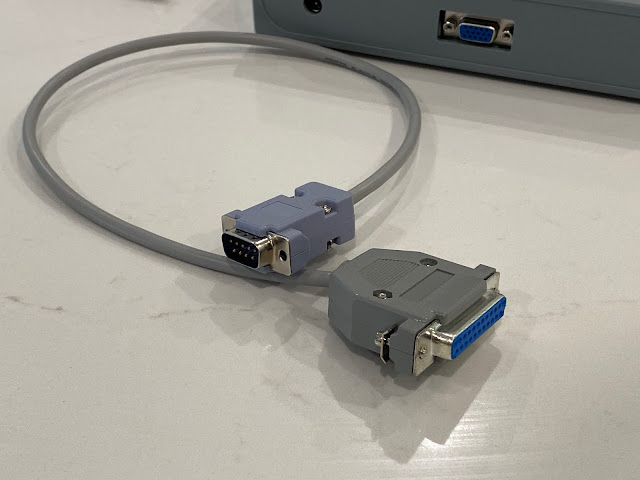 Pin outs for the RGB to CGA cable were included. Fortunately they build the cable for you nowadays rather than having to make it yourself (which you used to have to do). 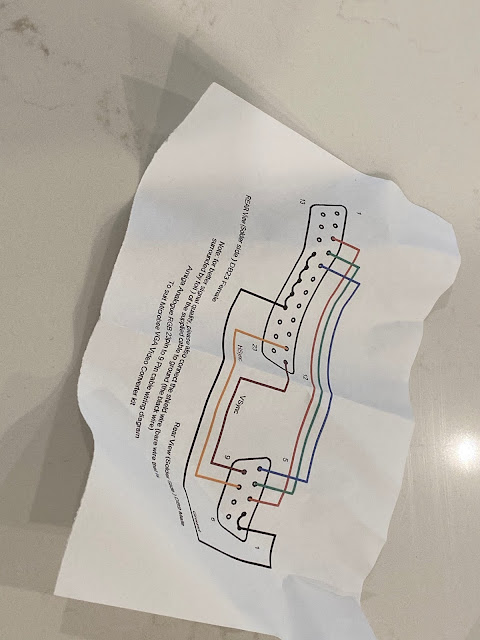 On the front of the unit is the Analog/Digital switch and the CGA input port. 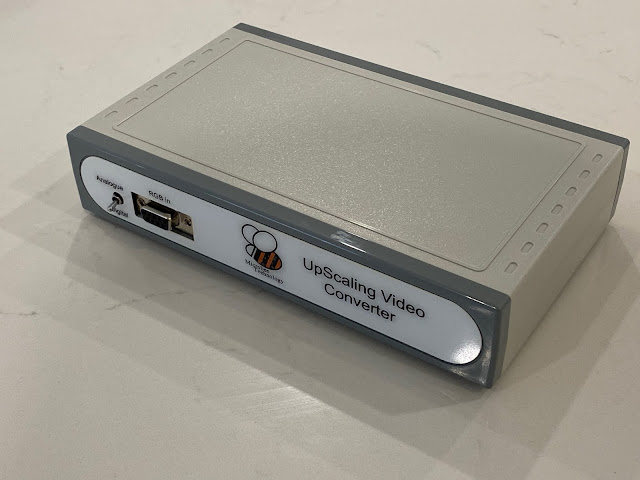 On the back is the VGA port and power input (power adapter is included) to power the unit. 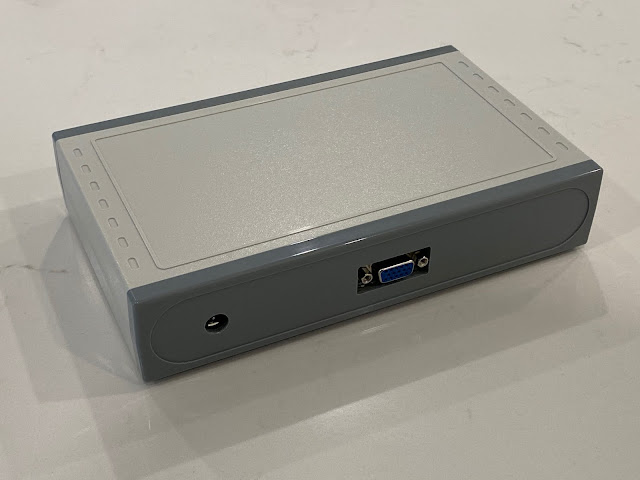 I set to work connecting up the cables to the Amiga 1000. 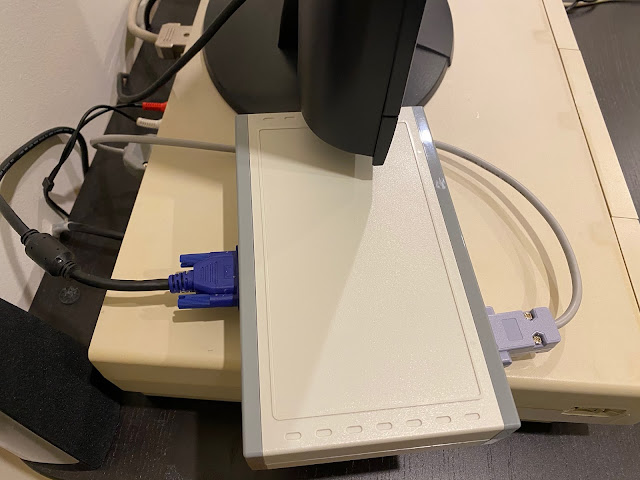 The Amiga cable is very short, so the upscaler unit needs to be close the Amiga 1000 RGB port. 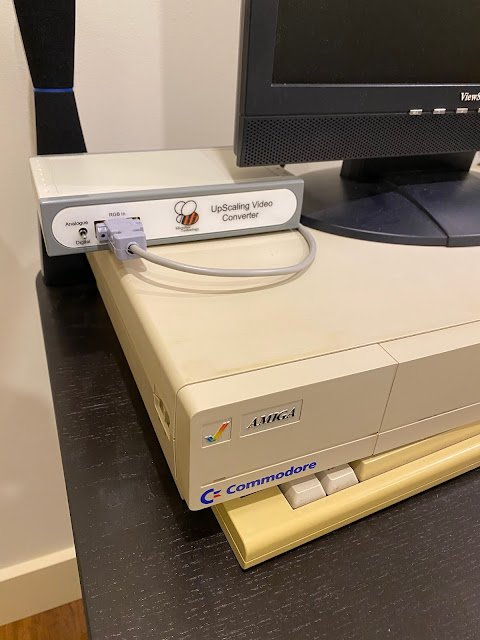 With it all hooked up, time to test it. On power on, I get the ACA500 boot screen (as I have an ACA500 attached to the Zorro port on the A1000). You can see some blue display garbage at the bottom of the screen, but otherwise looks nice: 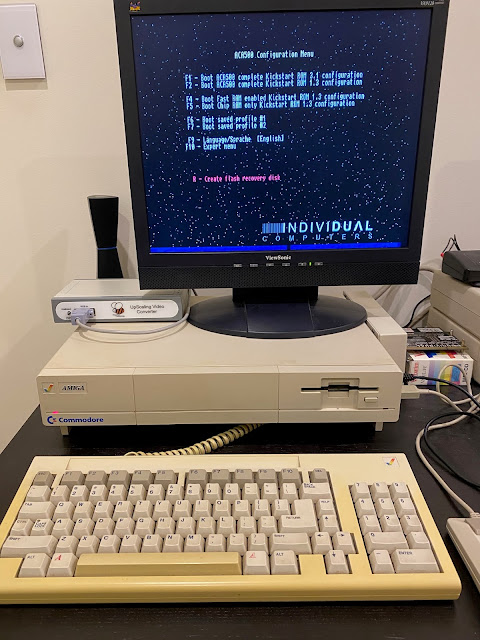 I adjusted the screen settings on my Viewsonic TFT 19" screen to move the display down a bit to remove the blue bit from view and have a nice clear scan doubled Amiga display: 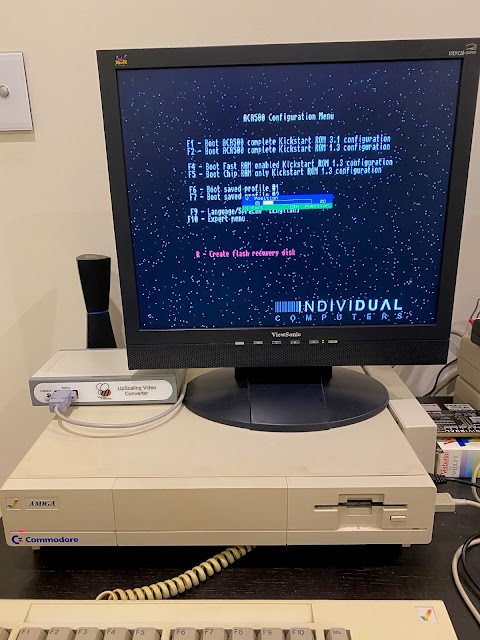 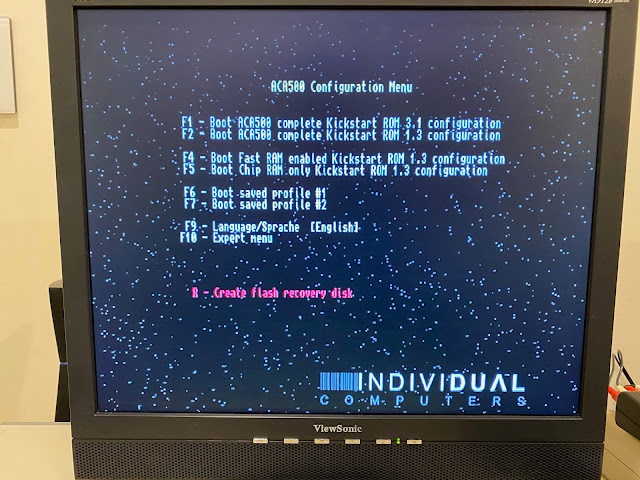 I booted up my Amiga Workbench 1.3 from CF hard disk: 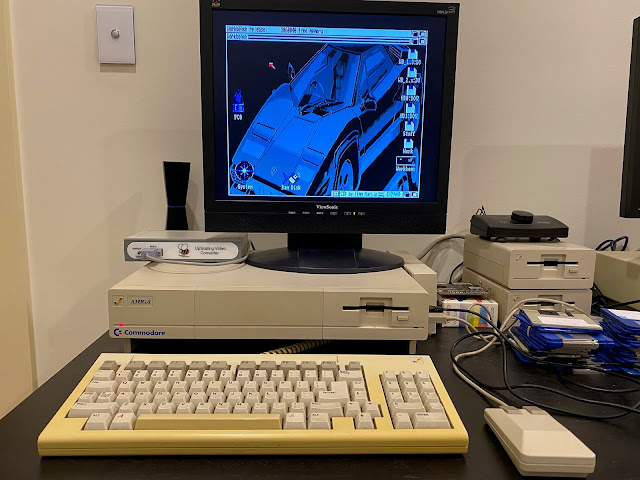 The Standard Amiga lores screen works great, although I should mention that there is still some screen artifacting on closer inspection in demos and games. I used a demo "Interference" from Sanity to show this - the purple edging has some artifacting: 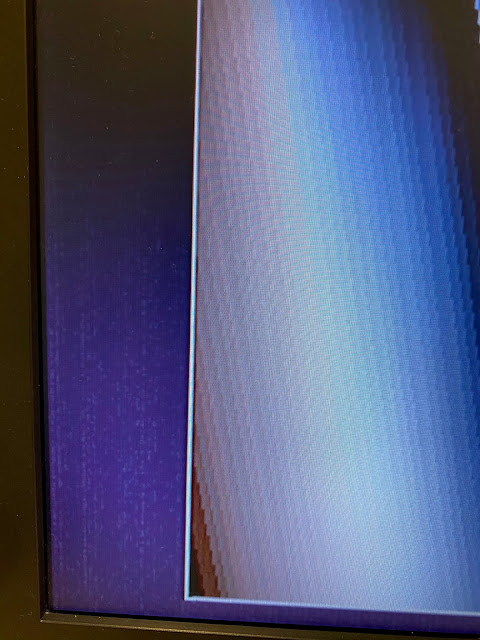 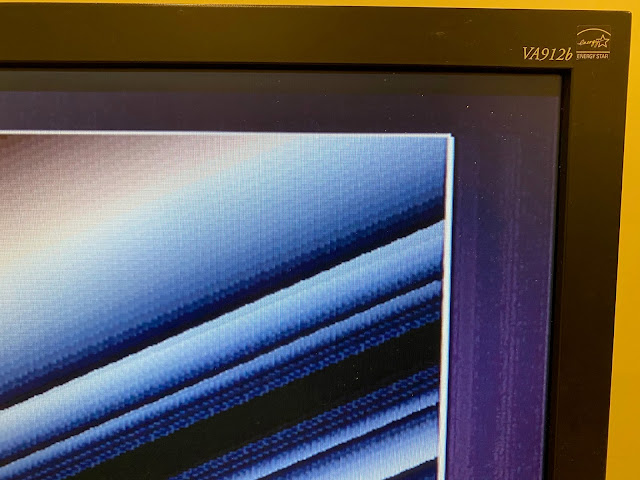 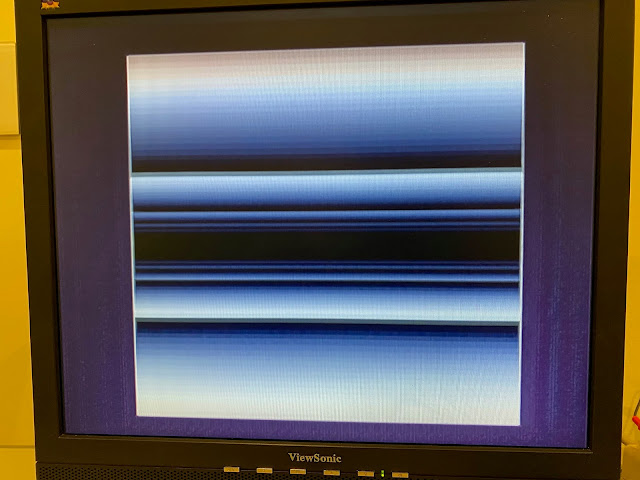 So, well, it is not perfect. But it is not too bad. Compared to some of my other very old scan doublers, this looks much better! Especially when using the Workbench and applications.

The artifacting is much less noticeable on black backgrounds: 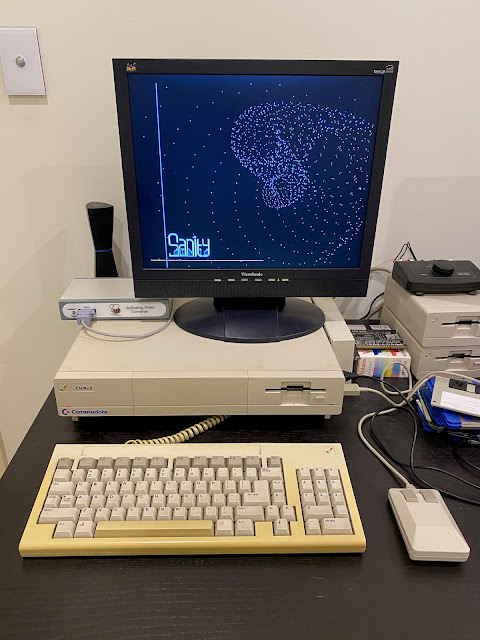 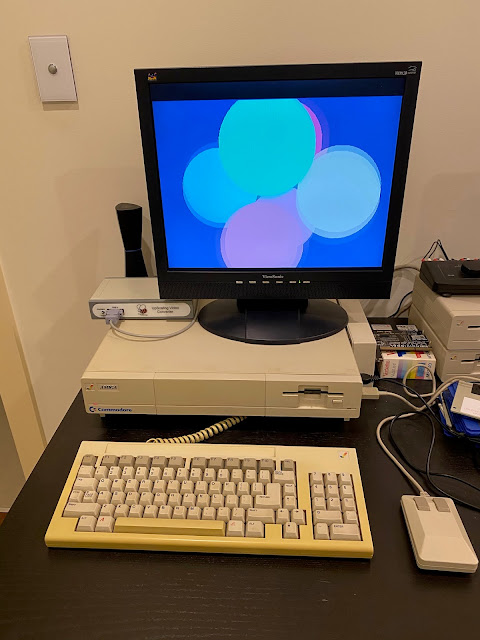 Next I fired up Deluxe Paint IV to test Hi-Res and Interlace modes - Hi-Res first: 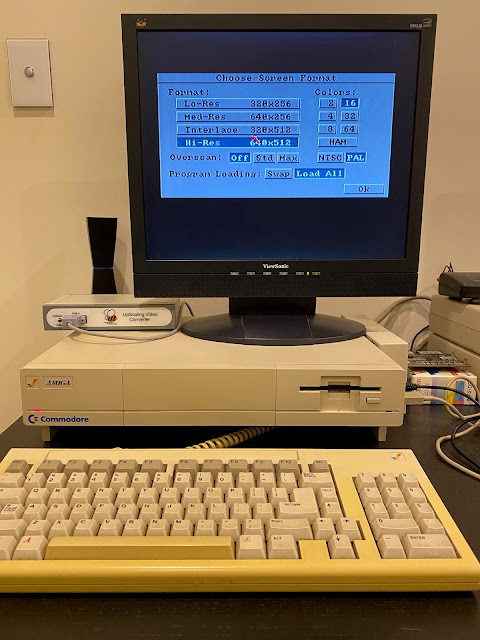 The output is crisp and looks quite nice actually: 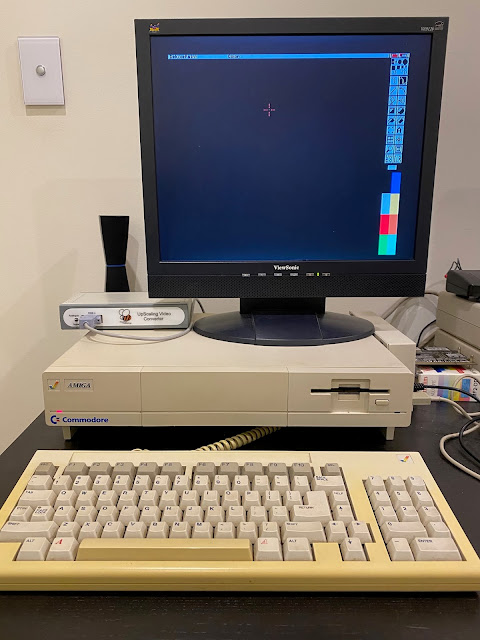 I tested interlace next and it displays very nicely with no flicker visible: 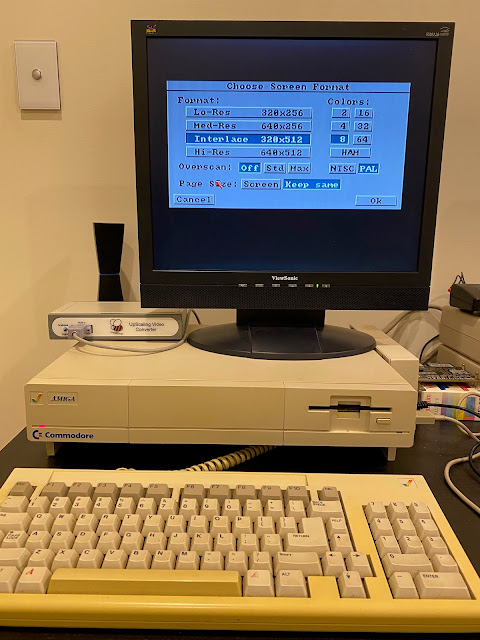 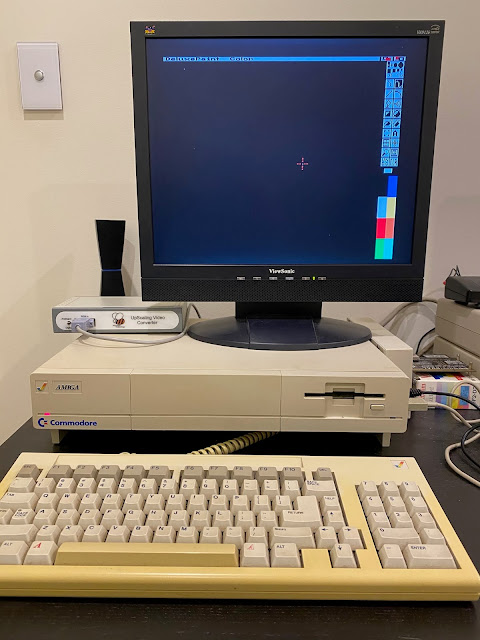 When using the normal workbench 1.3 with mouse pointer, I noticed some strange "watery artifacts around the mouse when moving. Not really annoying, but noticeable.

I am not sure if there is much you can do to optimise this (I assume the serial cable allows connection to the board inside to customise it), but it is ok for normal use and I haven't played with the board setup at all. Strictly tested as it was delivered to me.

I fired up some more demos that I know use some weird screen tricks (like Wild Copper) and it works well: 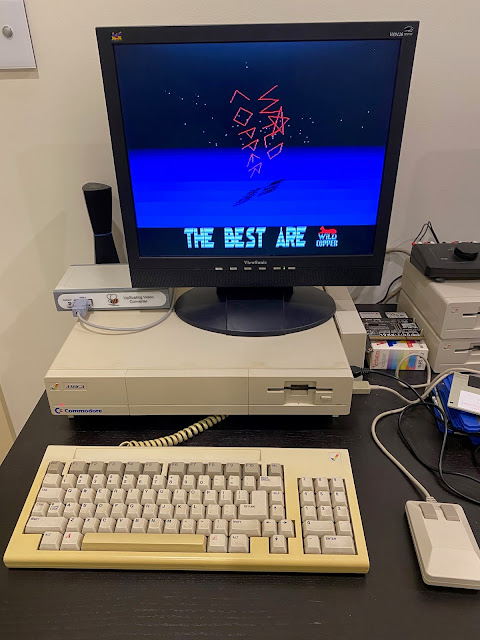 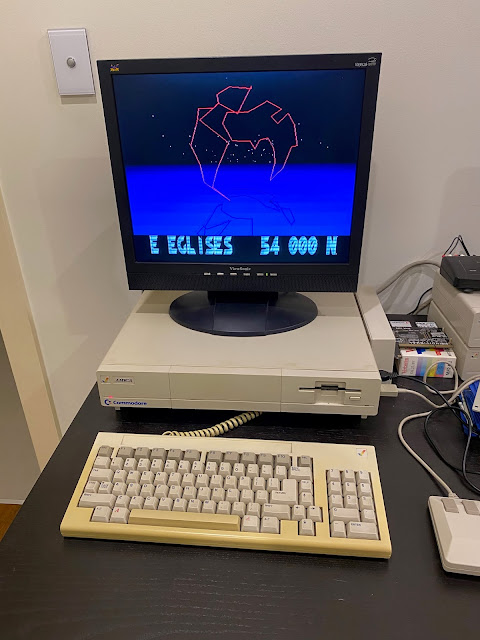 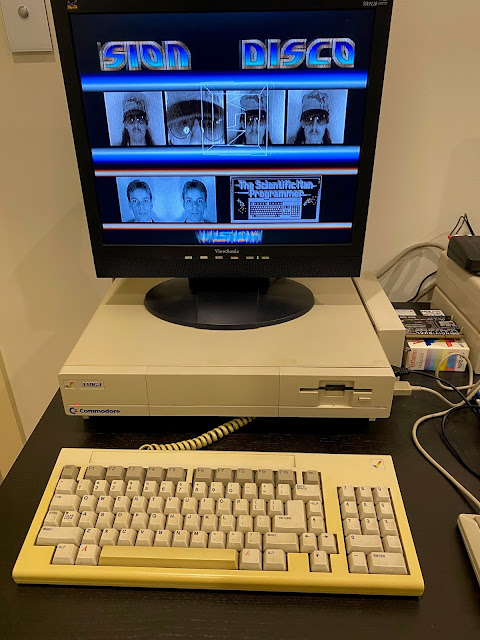 I also tested a game - APB - and with this game you can really see the artifacting up close with a purple backdrop. This is a shame as it kinda ruins things a bit: 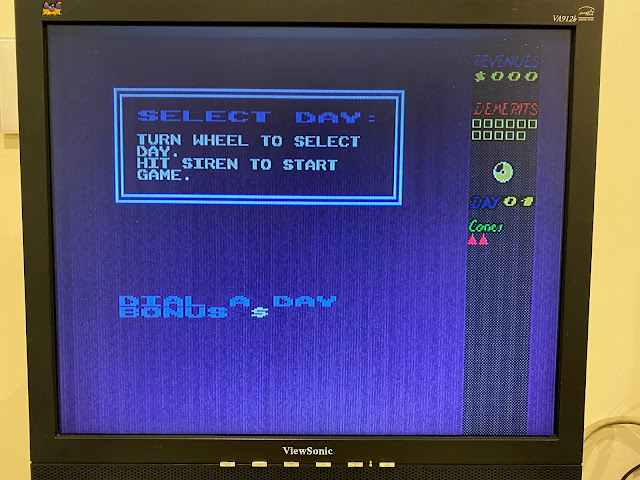 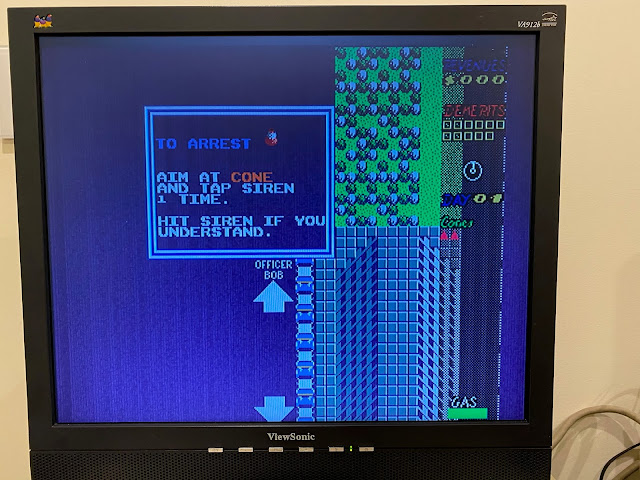 In short, the Microbee upscaler is good, but not perfect for the Amiga 1000. When I have some more time I will try to use it on some other Amigas as well to confirm if the issues I saw are Amiga 1000 specific or not. For now I will keep using it on the A1000 as it looks nicer than using a 16:9 screen and interlace works well.