Unfinished jump'n'run game "Jab Jum", along with it's sourcecode written in AMOS, was rediscovered by English Amiga Board user "jarre" in October 2020. With a little bit of extra work some downloadable files were created (see links/sources below), so now the public can enjoy this previously lost creation.

"Jab Jum" is reminiscent of "Great Giana Sisters" and the likes, but being an unfinished AMOS game this is of course a bit of a stretch. It looks cute and fun nontheless, and maybe if some enthusiastic coder is interested in investing some time to iron out a couple of remaining issues and maybe add more levels to the game this could be a great new (re-)release.

To run "Jab Jum", an OCS Amiga with Kickstart 1.3 and 1MB RAM is required.

So in the game you are this little white dog, probably called "Besi", that uses an Amiga boingball to bounce from platform to platform, climbing ever higher into the clouds. Are you already addicted? Yeah, it sounds a bit like "Flappy Bird", only vertically, and with bouncing. But it has more to offer: some platforms are moving, you can collect stars, you can actually finish a level, and there's an occasional bird coming along, making your climbing and bouncing life a little harder, or maybe even easier.

Nice and simple graphics, with vertical three layer parallax scrolling and what appears to be a copper-shaded background, plus a nice in-game soundtrack - "Jump Besi Jump" has great potential to keep you glued to the screen for prolonged periods of time.

The game requires an Amiga 500 with 1MB RAM.

How many games do you know that give you the ability to lay an egg? And take you back to the year 1985? Enter the duckmension of "Duckstroma", yet another platform game, previously released for ZX Spectrum and MSX computers, now in development for Amiga and NES systems.

You play Aura (a duck) and your goal is to deliver a couple of - presumably floppy - discs to some client. Along the way you have to get rid of enemies by jumping on top of them, and lay eggs which can be used to reach higher ground. Certainly a game every Amiga jump'n'run fan will appreciate, as maybe will the average passionate KFC customer.

"Duckstroma", developed by UltraNarwhal, works on any Amiga with 1MB of RAM, and is planned to be available in 2021.

Keep an eye on the game's website for the upcoming Amiga (and NES) version:

"Super Pumpkin Brothers" is a single screen platform game with some shooting, that obviously takes some inspiration from "Super Methane Bros", or maybe even more from the unreleased "Snow Bros". According to the history books (namely: the internet) the project initially started in 2007, an early preview was released, but then was put on ice, and has only recently been restarted. 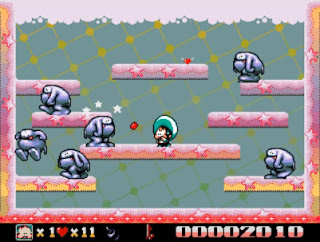 Whatever the case, it's a super funny looking game, created by what appears to be a mostly French team of developers. The visual style is very cartoonish, especially the enemies look so dumb and lovable, it makes you wanna pet them, not shoot them. But that won't get you far in the game - better watch the beautiful tutorial sequence of the game, and find out how to turn them into tomatoes.

"Super Pumpkin Brothers" is humorous, fast paced, great looking, and great sounding. Currently there seems to be no dedicated website, and no public download, but from what we can see so far this has cult classic qualities.

...and again some bonus gaming news:

Also some kind of platformer, but with a lot of shooting: based on the Invyya engine, using assets from the GBA version, this conversion-mockup of "Mini Metal Slug" popped up in October 2020. It's not really a playable game - but it looks awesome!