Demo group aBYSs strikes again with another arcade classic remake, Putter gets a physical release, we have an interesting point-and-click adventure from Poland, a beautiful action-adventure platformer, and an addictive arcade puzzler.

"Wilcza Buda" looks homegrown, and very ambitious at the same time. It's a point-and-click adventure by mc Studio from Poland. The game can be played in Polish and English, runs on any Amiga with Kickstart 1.2 or better, and 1MB ChipRAM plus 1.5MB. There's also a HAM6 graphics version that requires a harddisc, Workbench 2.0, and 2MB of ChipRAM.

The storyline roughly goes like this: Move around and meet people, to find your beloved grandma - but beware, you will encounter characters from another world, the forces of darkness...!

Sounds scary, and the game opens with an equally scary title screen. Tasteful, moody - scary? - music plays as you point-and-click yourself through the game, listening to grandpa's stories of times long gone, of soldiers, of werewolves...

"Wilcza Buda" is a very interesting project that seems like a bit of a mixture of Mist and Darkseed. Also it's one of the very few games that utilizes HAM mode. If you like dark adventures, or you're a horror geek, this is definitely one you should check out.

Here's a video of the HAM6 demo version from great YouTube channel Saberman:

Go to the game's website (you can switch to English language) to download "Wilcza Buda" demo:
http://www.wilczabuda.pl

After the awesome "TinyInvaders", "TinyGalaga", and "TinyBobble", this year demo group aBYSs brings us "Tinyus", a remake of 1986 arcade shoot-em-up classic "Gradius"!

To some, "Gradius" has always been the pinnacle of shoot-em-ups, the one that was just too good to be true on homecomputers. The C64 version called "Nemesis" played really good, but had to omit elements of the original arcade machine. There was never a port for the Amiga - until now. 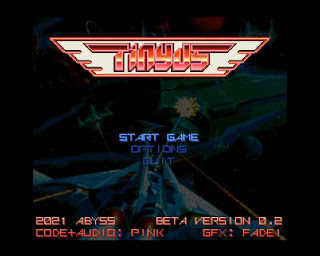 In February 2021 a beta version of "Tinyus" was released to the public - and just like the previous aBYSs releases it's awesome. This is how "Gradius" should look on the Amiga. It doesn't get much more arcade than this - near-perfect graphics, tons of moving objects on screen, and a well done attempt at reproducing the multichannel soundtrack from the original hardware. 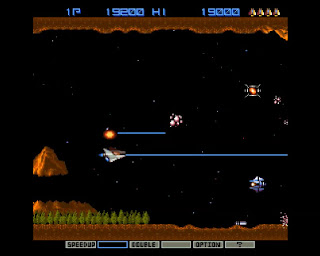 The game requires an OCS Amiga with 512KB ChipRAM and 512KB SlowRAM or better, some acceleration / Amiga 1200 is recommended for fluid 50fps performance. At the time of this writing development is still ongoing (beta testing), a final version is likely to be released in the near future. 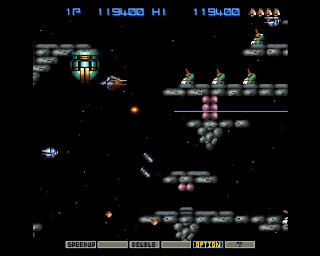 Creeping Me Out: Hex Night

The game features characters and locations from Michael's comic series "Creeping Me Out", which you can admire at https://www.creepingmeout.com. (The author explicitly states that no knowledge gained from the comics is required to complete the computer game.)

You control a character called Francis (check out the comic series if you'd like to know more about him) on his search for his friends.

The game is in early development stage, but it already looks gorgeous. Visually, it has lots of elements reminiscent of The Addams Family or The Munsters, as well as 1950s science-fiction in Technicolor, and it's just beautifully drawn and animated. We can already see some interesting little game mechanics, like little bugs that try to attack and stick to Francis. Also there are ladders, scrolls with hidden meanings, things to punch, things that crawl, things that drop, ... lots of things! There will probably be even more things to discover, as the author states he has a strong element of exploration in mind.

The game is planned to require harddisc and/or CD drive. A demo is said to be released soon.

Go to the game's website to find out more:
http://mixelmagic.com/cmo-hex-night-amiga/

And don't forget to buy one of Mixel's comic books:
https://artithmeric.com/author/mfdawes/

This is an arcade puzzle game similar to Tetris, and even more similar to 1990 SEGA game "Columns".

You drop pieces in a playfield like in Tetris, and the pieces' tiles must color-match previously dropped pieces in order to remove them from the playfield. One, or two players on separate playfields simultaneously, control their pieces with keyboard or joystick, accompanied by some decent music tracks. There are multiple different playing modes and background graphics, and you can add your own background images. It runs on any Amiga with 512KB RAM.

"Crazy Columns" has a great soundtrack, looks colorful, but clear and polished, is easy to learn and play, yet challenging and addictive - certainly a must-have for friends of Tetris, Klax, Bust-A-Move/Puzzle Bobble, and the likes, as well as for any casual gamer.

You can watch a video of current "pre-version" 0.98 of "Crazy Columns" on Saberman's YouTube channel:

It hasn't been a long time since we reported about "Putter" demo by Jacek "czorny" Nockowski, and we already have an update: Putter has just been released as a commercial, boxed edition with floppy disk and CD.

The game runs on AGA Amiga, and a little bit of acceleration (e.g. overclocked 020) is recommended for optimal performance.